So here we are, Christmas time again.

Some of ya’ll might remember a couple years ago I posted a thread where everyone was asking me what to get me, and I had no idea because I legit didn’t want anything. (If I could buy it, I already had, if it was too expensive, I couldn’t ask someone else to buy it for me) That actually turned out ok, it was weird at first, but people eventually accepted that I really don’t want anything.

However, now’s the opposite. For once I really have no idea what to get anyone. I don’t want anything. I’ve been isolated almost all year and I use adblockers all the time, so I have no idea what people are even supposed to want now.

So mostly people are getting gift cards, but there are a couple of really close people for whom I’d like to have actual presents for them to unwrap. Picking something is one of the hardest things I’ve ever done. And the delivery date window is rapidly closing (already closed from most sources).

So tonight I’m cranking a mix of Black Sabbath, country music, etc and shopping. But looking at the Amazon recommendations just turns my stomach - it’s all cheap consumer crap. There has to be a better way.

I used to love Christmas shopping. Picking the perfect thing for this person, finding something by chance that someone would like. Playing in the aisles of the stores (accidentally knocked a ceiling tile out in one while testing a super-bouncy ball that actually lived up to its name). But now I get none of that. Just anxiety. Gotta find something right before it’s too late.

I’ll get it done though. I’m just sad that it’s now an unpleasant task instead of a fun thing to look forward to. One of my friends that I always used to go do this with messaged me saying we have to do it again once the pandemic’s past, but honestly the last time or two we didn’t even buy anything. Was still fun to hang out together and play in the stores though.

How are the rest of ya’ll doing? Hope ya’ll are handling it better than me.

I used to love Christmas shopping. Picking the perfect thing for this person, finding something by chance that someone would like. Playing in the aisles of the stores (accidentally knocked a ceiling tile out in one while testing a super-bouncy ball that actually lived up to its name). 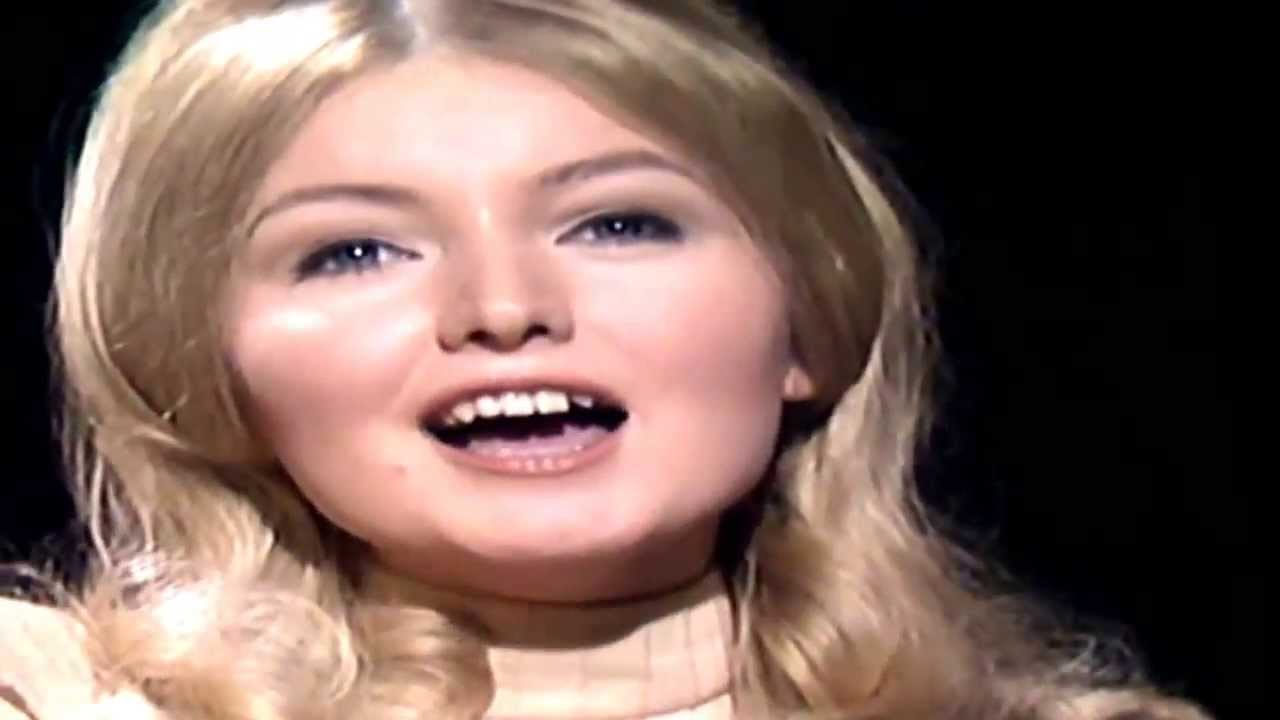 Growing up, my Muslim family never celebrated Christmas. This year I am not going home, because pandemic, so my roommates are teaching me how to have my first proper Christmas. I am approaching this with anthropological precision. Here are a few observations. https://t.co/1WARv5nax4 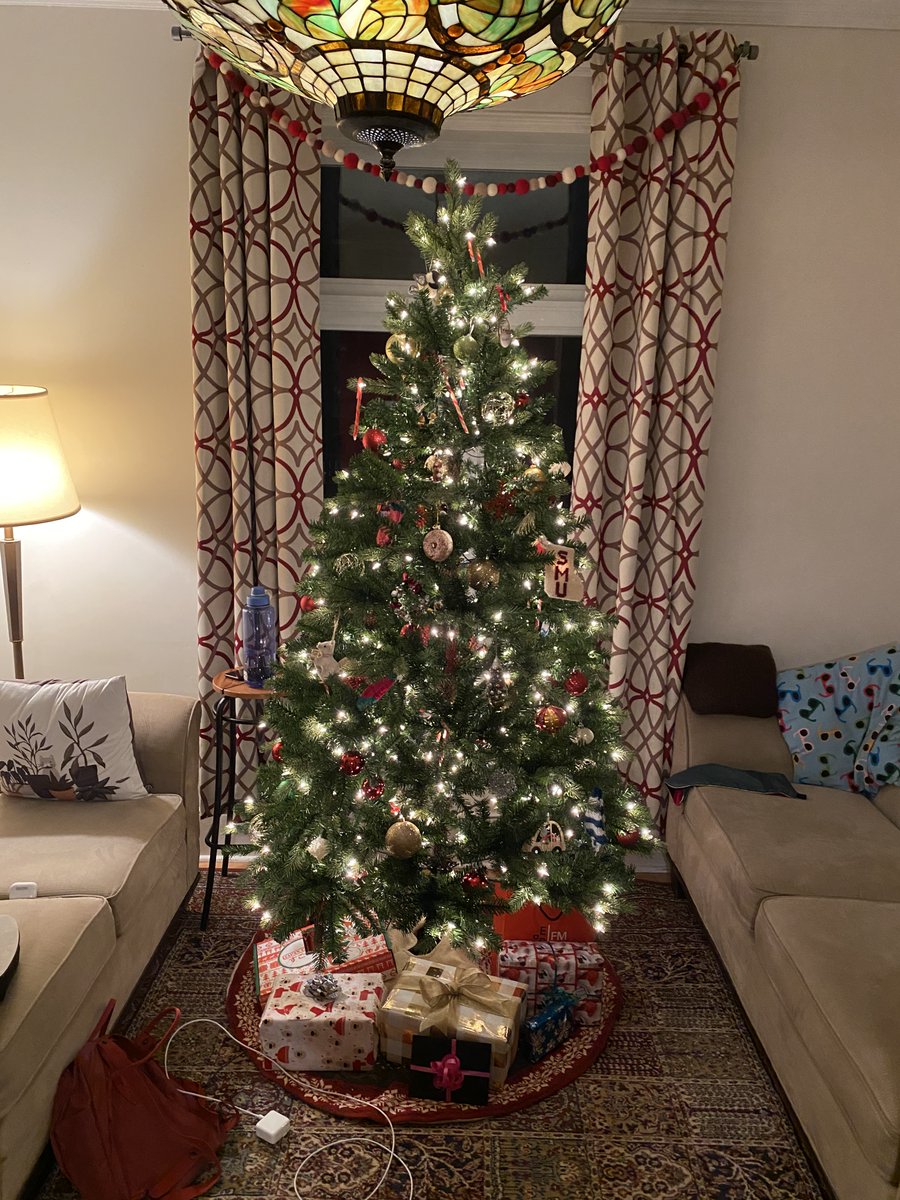 My pointless job has had me working so much for the past few weeks that I haven’t had time to think of anything else.

I looked at the calendar on Friday and was surprised to see it was already the 18th. I thought we were still around the 10th.

I only bought two gifts this year. Both were books from the Strand’s online store. Trying to help them stay afloat during the current situation.

Oh, and no one should ever buy anything from Amazon. I just thought I’d point that out again.

Oh, and no one should ever buy anything from Amazon. I just thought I’d point that out again.

I agree with the sentiment, but not the conclusion. I hate the way they treat their warehouse workers (and delivery drivers aren’t much better off - one of my friends did that for awhile). But their shopping arm does provide unrivaled variety, service, and shipping. Nothing else even comes close. And we all use the Amazon Web Services all the time because almost every company that we use now uses them. There are other cloud providers, including big names like Microsoft and Google, but mostly when people talk about the cloud, they’re talking about AWS. And even for non-public stuff, it’s being used internally.

So it’s not like some little mom&pop shop that’s going to shut down if the town boycotts it. Even if everyone did it, Bezos could just laugh at it and the company would keep right on running. It needs proper labor unions and regulations put in place. But as for boycotts, it’s well past untouchable; ‘too big to fail’. The answer at this point has to involve unions and regulation.

My friends and I did a cookie exchange/ gift drop off today then a video chat, similar too what we did for Thanksgiving dinner exchange.

One of my friends made 13 little gingerbread house kits.

This was my first time decorating one, I made a weird monster house. 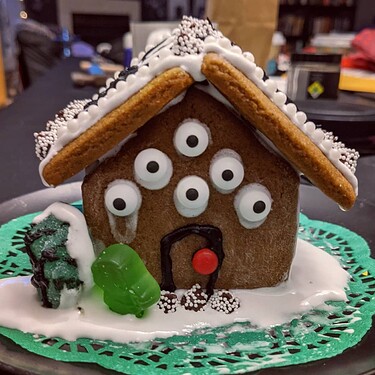 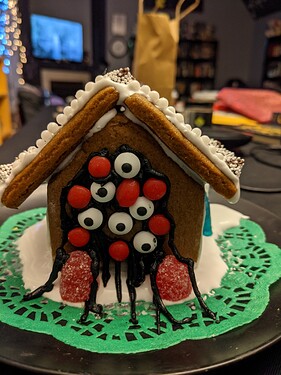 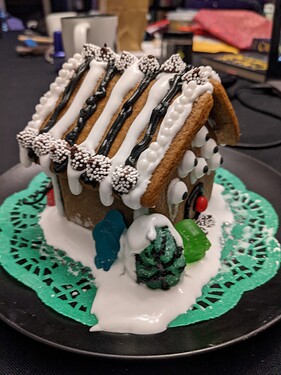 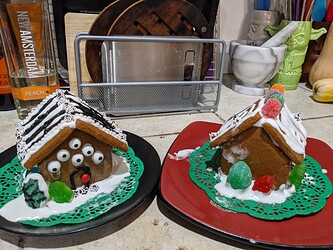 I still need to order a gift card for my Mom and brother though.

We didn’t put up a tree but I’ve been making new chainmail ornaments all week and just attaching them to the lights over the fireplace as I finish them. 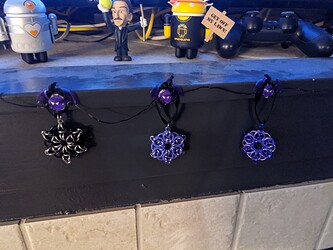 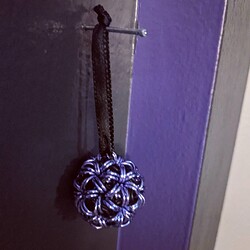 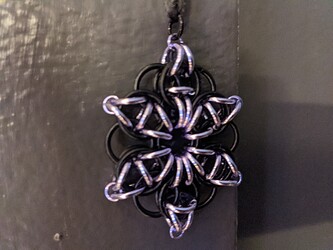 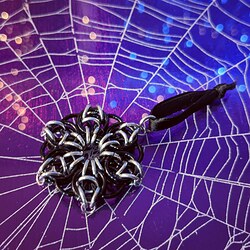 Those ornaments are stunning.

I have basically informed my family that Christmas is canceled this year. Between COVID and emergency vet bills…

At the same time, I see hints that a) my sister does not learn from experience and b) does not listen to me. I am glad we are in different provinces, or this would be harder to pull off.

Checking in With Santa Claus | The Brian Lehrer Show | WNYC

The big man is in the building.

We’re only getting for ourselves this year online, and skipping going out and shopping for others (as much as I miss doing that). We don’t really want to create a sense of obligation in a time of want. We are sending out cards to family… and I did send one gift that I had already gotten to a friend, but that’s it.

I do think we are going to do another google meet on Christmas, though, since we won’t be seeing anyone in person.

I’ll be sending presents to my nieces, which will arrive in January. In fact, I’ll probably send everyone something, because I’ve been gathering bits and pieces all year.

Generally speaking, I dislike obligatory gifts, and very much prefer gifts for no reason. Luckily, no one in my family gets worked up over late presents, even the (shockingly no longer quite so) littles.

Thanks, I actually stayed up too late last night working on scale flowers. I’ve never made large ones before so I was figuring out if I even had appropriate ring sizes for the pattern. 5/16" didn’t work at all, I was lucky I did have some 3/8" but only in plain silver, I think I still really need a thinner gauge 3/8".

I still need to add ribbons to hang them. 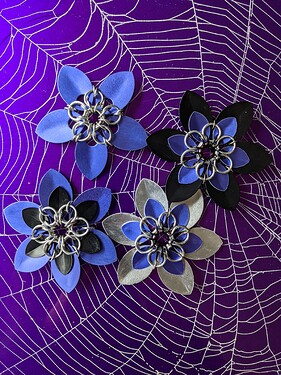 I usually use small or tiny scales for jewelry sized flowers. And I’ve never made the double scale ones before, doesn’t work with the smaller sizes.

Those are really pretty!

I played this song for my daughter. She could relate. (Note: 5 minutes long but 1st minute you get the idea.) 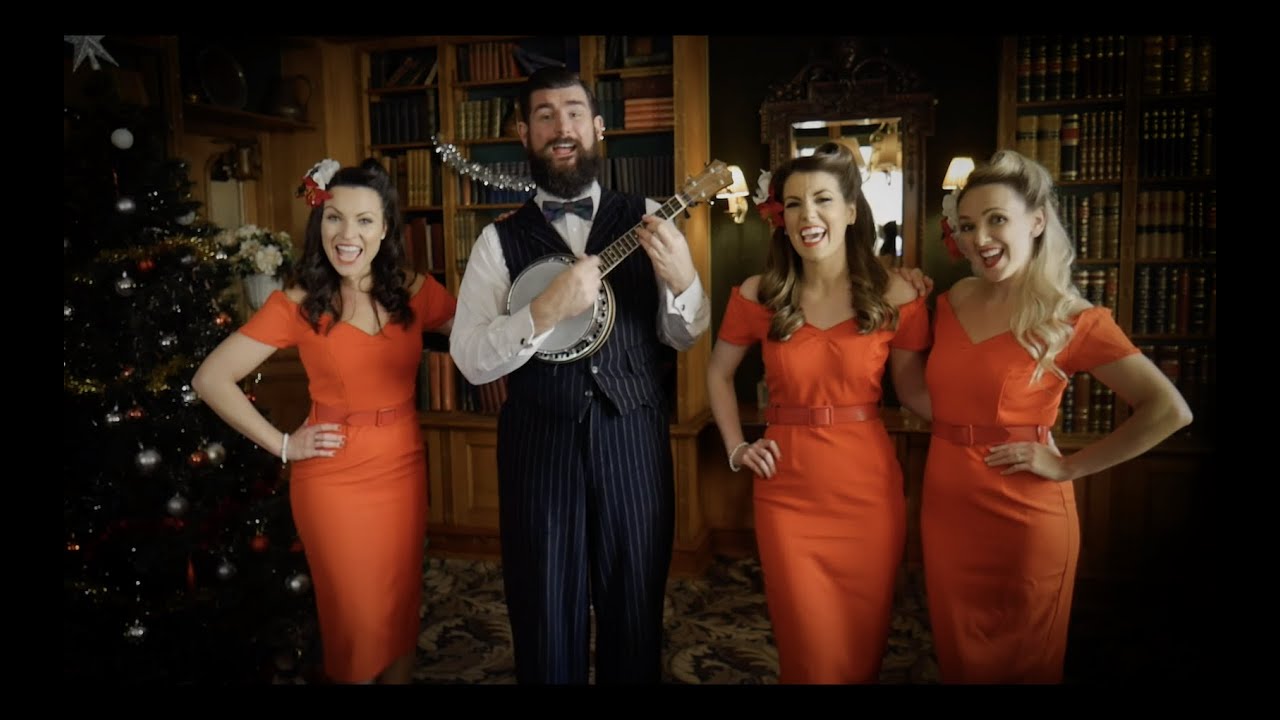 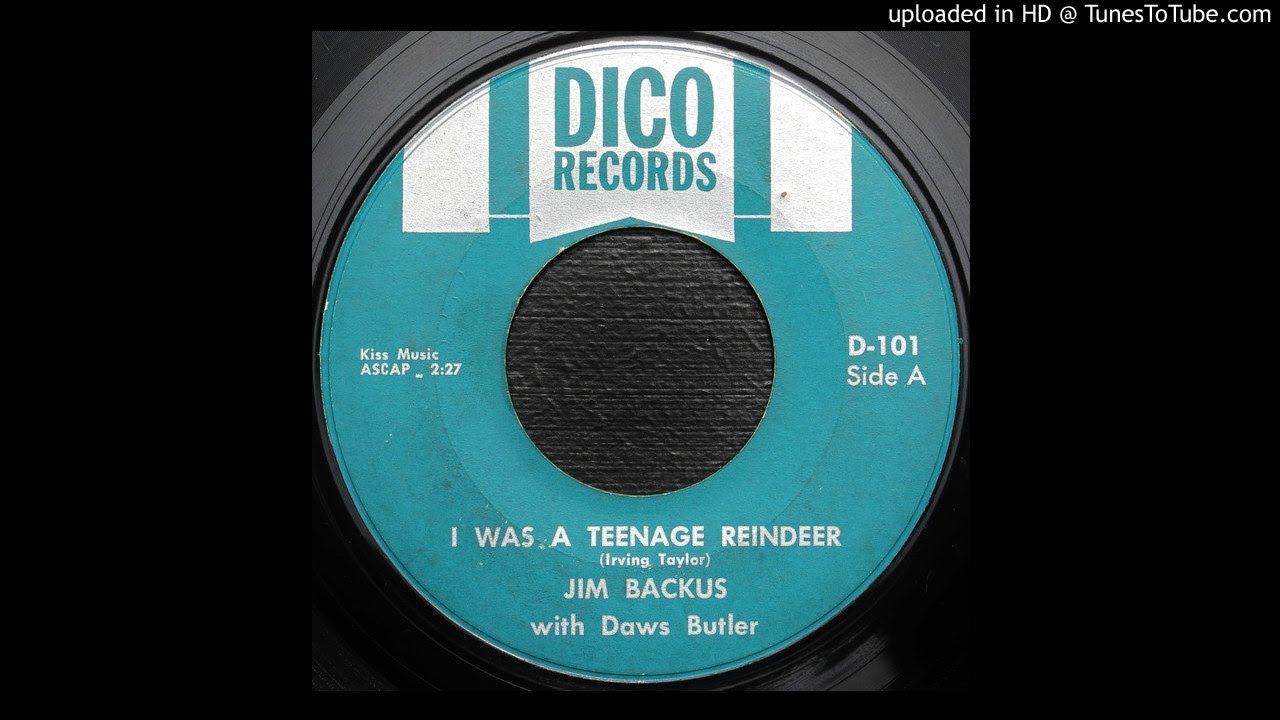 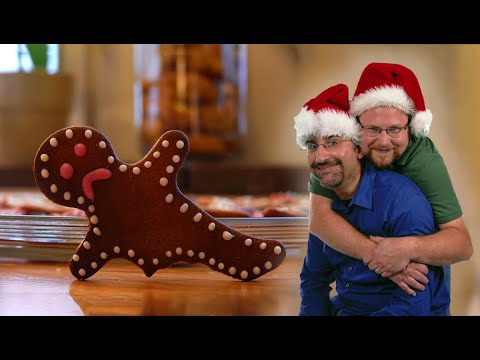 “Here’s to an uneventful Christmas this year”
(It’s been a while since Paul and Storm put out anything new, and this one hit the spot when they released it two weeks ago)

My dad loved him and his Martian.

There is exactly one Christmas song that I legitimately love, and this kid nails it: 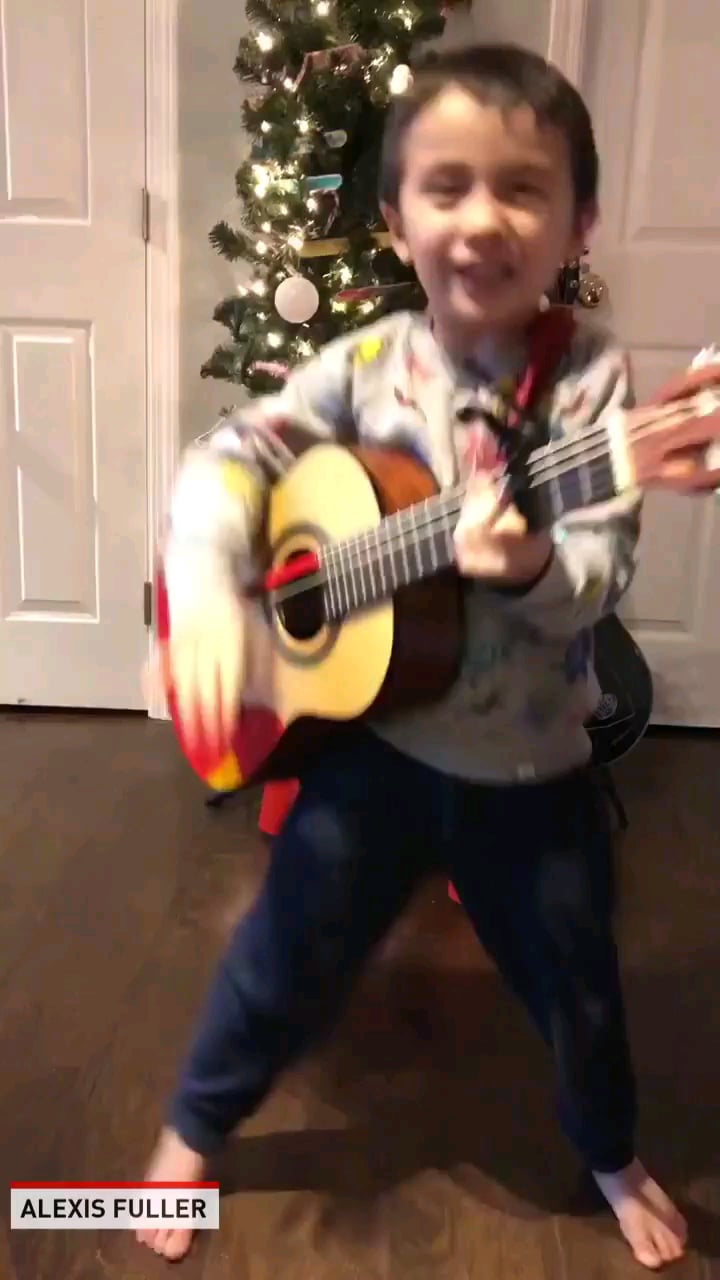 Some friends who do not ordinarily send gifts are making an exception this year, and giving gifts to my son as well as to me (or to the both of us), for which I am grateful.

Also welcome: a borrowed decorated tree this year, and a family (in-laws, as my son is my only living immediate family and he lives with me) call on Xmas Eve.

I sent out my usual presents, and cards to most of the usuals who gave me updated addresses, and to penfriends who, like me, lost loved family members this year.

Our Christmas will not suck this year. I am elated that the local delivery folk work extended hours to ensure our gifts arrive before December 25.