"If this isn't nice..." A space for happy moments

New spring leaves have got me thinking about pattern generation. And just now a small company in CA asked to ‘license’ a tessellation I rendered years ago. They’ll send me one as a puzzle, so I’ll get to have the physical thing. I don’t know how they’ll do the art, but here’s their test pattern: 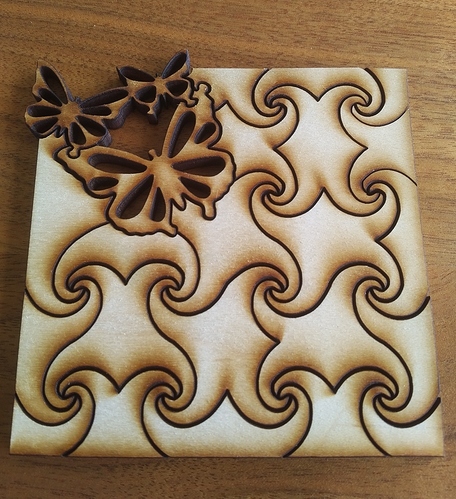 Mrs Cynical and I moved into our new apartment on Friday. I left work early, picked up the keys from the landlord, made a coffee and sat on the balcony waiting for Mrs Cynical to arrive from our old place.

It’s been a stressful couple of months for a lot of reasons and finally moving into our new place feels like the reward for a huge amount of effort from both of us. Suffice to say, I was very pleased that the day-long storm cleared and this was the result: 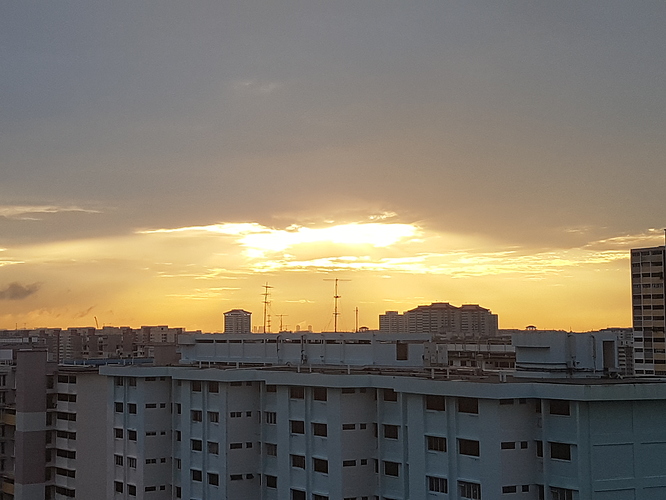 I’ve been sick for two weeks with chest, ear and sinus infections. My youngest sister came over on Saturday and did some grocery shopping and cleaning, and made soup. I’m so grateful. Plus I just crawled back into bed and the flannelette sheets and electric blanket are such a comforting, comfortable combo! Heavenly.

So, I’m one of those “loves to write but mostly does it in their heads” types. At the day job I try to really throw myself into work, just because that’s what’s required just to keep up (and most days that’s okay). It’s also part of the culture. Today I had to run back after leaving to pick up something I needed offsite tomorrow, and one of my colleagues said, “so much for leaving early, eh?”

Um. I’d been there slightly more than one regular working day. Our manager discourages undocumented overtime, but as you can see, it’s heavily baked into the culture. I spend half of lunch working on extra projects. Which is also cool because they’re fun projects, but that means no writing time during the day and being more tired at night.

Tonight I managed to get home at a decent time, made a lovely dinner, and actually revised fiction for a bit.

Interesting thing about that:
I didn’t do a word count (useless for revisions IMHO anyhow).
I didn’t track how long I worked.
I didn’t set any “goal” beyond “keep working on making this #@!@$#@! plot point make sense”.

And things got done. It was all just matter-of-fact, cool, good. No angst.

Now the trick is to keep up that no-angst vibe.

At the risk of sidetracking my own topic, I’m (supposed to be) doing the same thing with regards, well, general life. The idea that the less stress and pressure you put on yourself to do something, the easier it is to be able to do, is strange and counterintuitive, but true.
I’m… not very good at it, yet, (ahem), but when I get it to work it’s brilliant, and effective and the letting-go is scary as hell. (

It really works. A couple of years ago I switched from a “GET UP NOW!!!” alarm clock (it was the kind with wheels that jumped off your nightstand and ran across the floor burbling loudly until you got up and caught it to turn it off), to an alarm that’s peaceful-sounding, even New Agey. The latter works much better and puts a much better spin on my mornings.

Visiting the Miro museum in Barcelona, I became unaccountably emotional looking at a tryptych of paintings that were 8 or 9 ft square, painted white with a single black line on each.

I have no idea why, but I remain glad I did.

Today I had a late lunch at one of my favourite places with two of my sisters, including the one who did shopping and made me soup when I was sick. So small good things about today: I got to partially repay my sister by buying lunch; the food was truly great, as always; the place was giving out donuts for International Donut Day so free dessert!; it was the second time I’d left the house since getting sick two weeks ago; and just hanging and laughing with my favourite sisters. Today was a good day

Today I was able to pass on some fencing experience (and a demonstration) to a youngster on why they were being reliably beaten. And then add advice on how to defend against same.
This was just nice to be able to share, and maybe help.

Relaxing on the settee, the sound of much-needed rain coming in through the open window. Maybe just a touch of ozone to the air.

All my fingers crossed people in the British Columbian interior will be able to say the same soon. Forest fires aside, rain just outside an open window is so lovely.

There’s a place I walk where, if it’s quiet, late at night or on a Sunday morning, you can hear tiny biomass falling in the dense forest. There can’t be any other sound to hear it. It’s like the lightest possible rain. Manna from heaven. Hypnotic, transporting, wondrous.

I had a wonderful flight westward. Weather great, no screaming babies, no airsickness, kid behaved, seatmate quiet or talkative when desired. She and I took the last of the California Rolls on the flight (we were two rows south of business economy). Person in front of me never reclined his seat, nobody spilled a drink or food on me. Best of all, my lengthy legs allowed me to smoothly hurdle over my sleeping aisle-seat neighbour to get to the lavatory, and I timed my return from my relief station to two minutes before the turbulence started.

while i acknowledge that he draws strong feelings, Macklemore’s new video is really sweet:

I have a happy wireless story. No really.

My voicemail used to work, then stopped. Since I virtually never get voicemail, I dragged my feet about getting it fixed. Then a few days ago, I just randomly decided to.

I talked to this super-competent customer service rep who said she was based in PEI, but originally from Ottawa. She confirmed I get VM with my phone plan and reinstated it for me – it had got turned off somehow.

Then she checked my plan against my usage, agreed with me this was the best plan for me, and doubled my monthly data allowance for free because I’d stuck with the company instead of quitting in a huff over something being broken.

She also warned me that when my contract came up for renewal, I’d probably have to remind the rep to alter my data plan so I could keep the double amount.

How cool is that?

Who are you with?

Fido. I can’t actually say I’m thrilled with them because they seem expensive to me and their on-line support is buggy at best, but this was well done. I’ll give them that.

I made a friend on Mastodon today. I may’ve been his first follower on Mastodon. It’s lovely serendipity when you and another have enough time at first meeting to learn there are at least three subjects in common dear to your hearts.