2017 Apoceclipse, for all your anticlimactic observations

I was very crafty. I went out the west side of Portland where I know the little roads. I didn’t get to Lafayette where I intended to be (late start, wasn’t sure I’d go, etc.) but made it to Newberg and caught the very edge of totality.

Saw Mars. Or Saturn. Not sure. Saw the weird swirly shadows/polarized light from (I assume) the corona.

Got back by swooping up around and getting back to SE from I5 S. Traffic was light. South of Portland Google shows red everywhere from all the folks who didn’t think they had to make a day of it in Mollala.

A nice drive, though, a contemplative 20 minutes in weird light at the side of the road.

I wouldn’t fly half way around the world for it, but it was fun.

It was very cool here. Tried to get pics, but cell phone cameras don’t pick up the things that human eyes do.

I tried to video the shadows. Lemme see what I got. 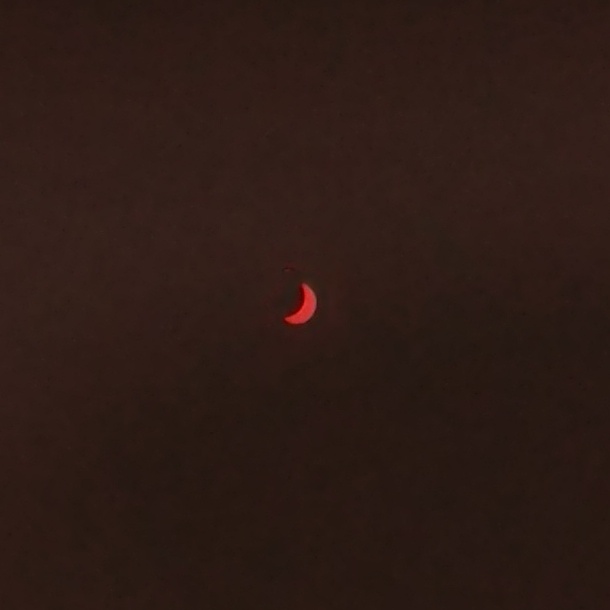 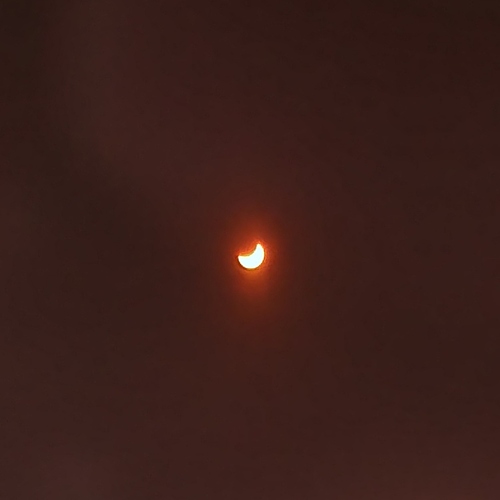 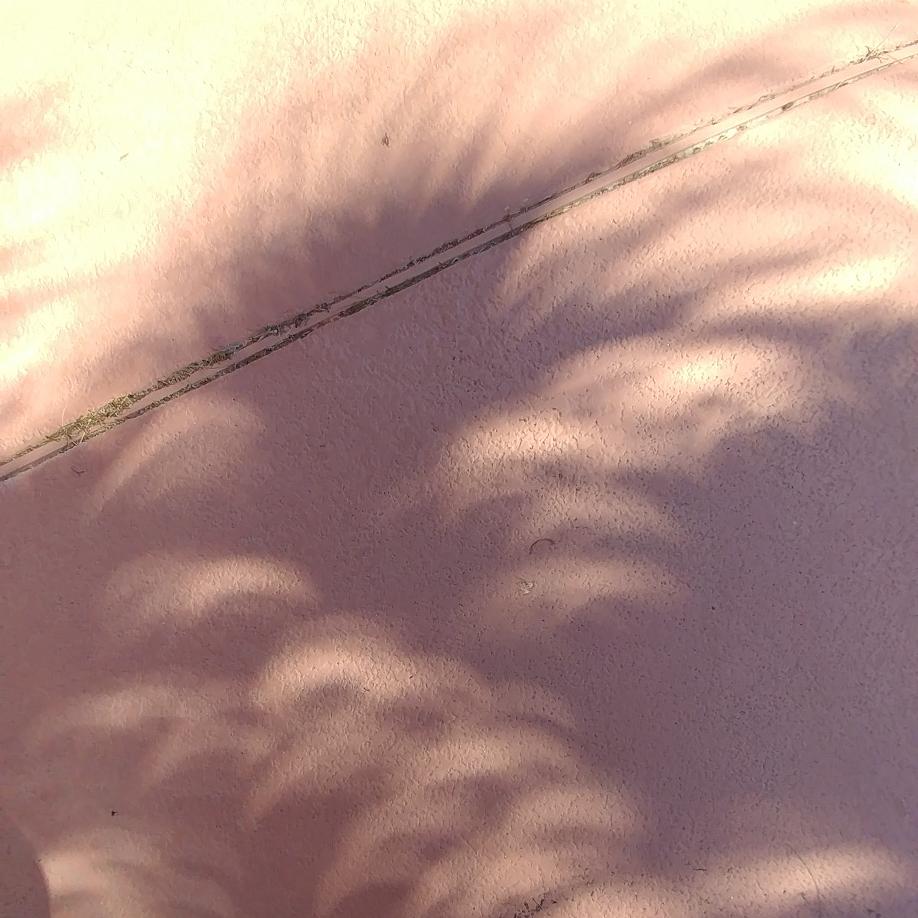 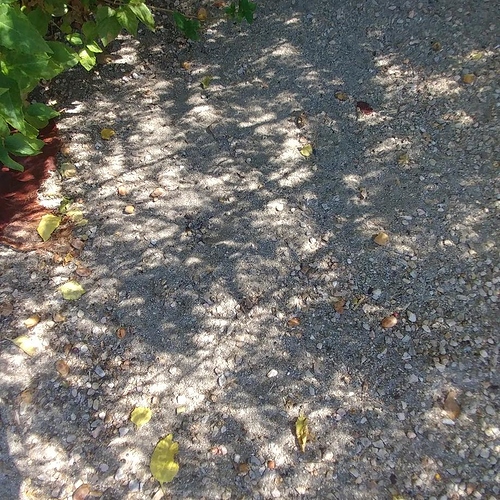 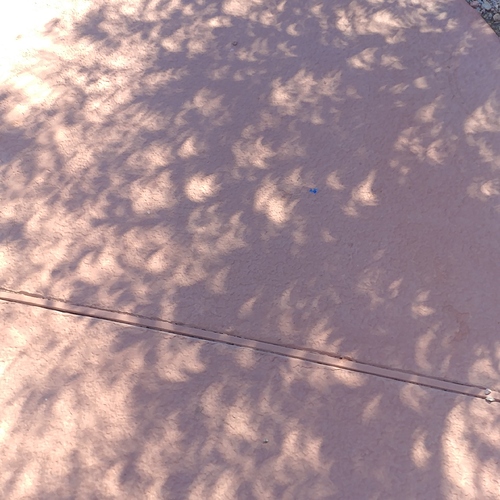 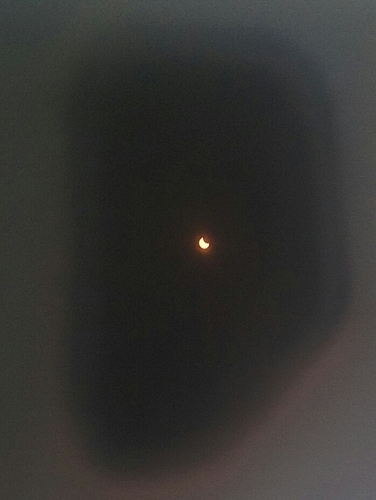 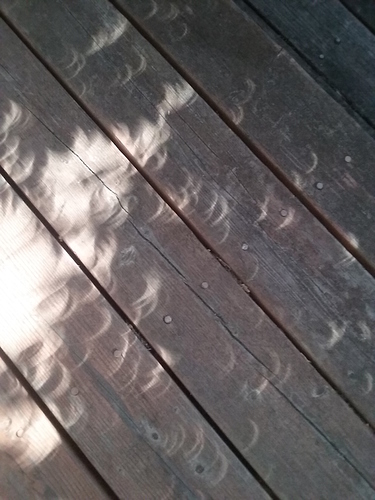 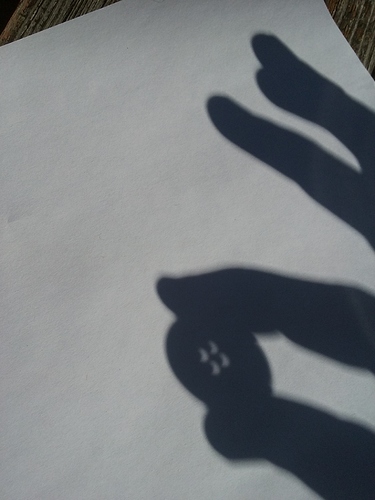 I didn’t take photos, but Seattle was blessed with a clear sky and I sat at a picnic bench watching. It wasn’t a total eclipse, but maybe 88-92% of the sun was eclipsed and that was good enough for me.

I am a little disappointed NK didn’t lob a ‘space probe’ across the path of the totality.

And by disappointed I mean relieved, but noticing the missed opportunity for epic theatre.

I saw on the news that ATL was getting 98% occlusion at 2:37pm. I always have mondays off, so I figured good enough, I’ll just step outside around 1pm and suss it out. I did no research into viewing but I hoped 98% might be enough to look at it...

I tried to video the shadows. Lemme see what I got.

Never mind. I never knew it had to be so hard to make a fucking gif without uploading to some fucking middleman’s shitty website.

Cellphone camera (Samsung Galaxy 7), total amateur, no tripod, without and then with a lens from eclipse glasses stuck over it. Hermann, MO. A bit less than a 2 hour drive from where I live, but I had former coworkers coming from California and Texas for this and a bit of a reunion. 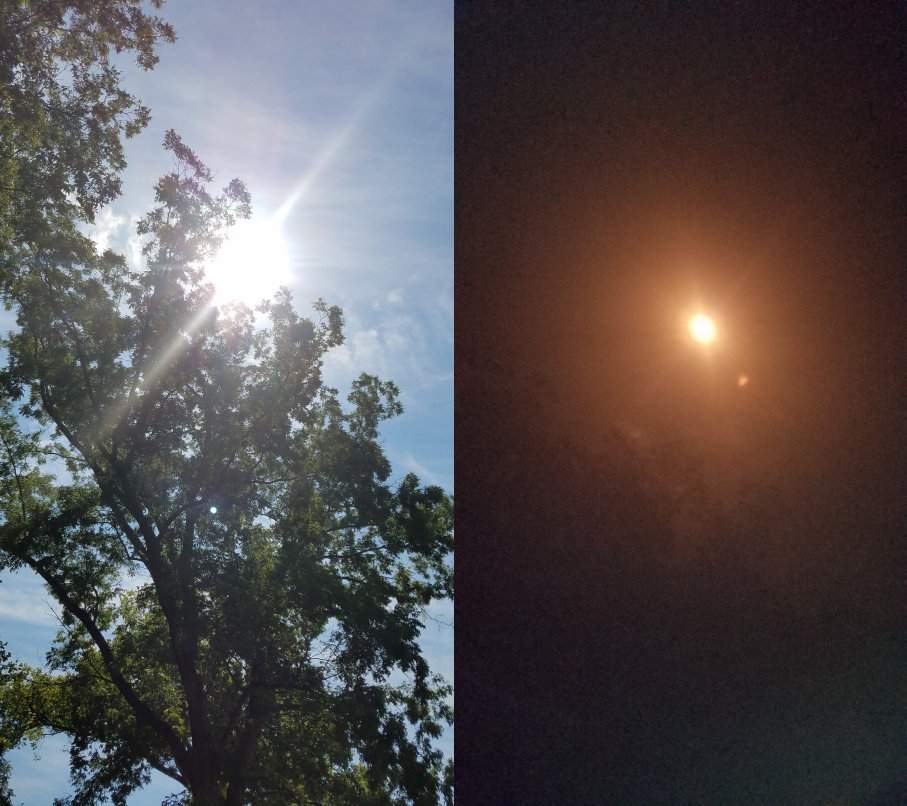 Without the eclipse glasses/filter it just seemed like a normal sun and mostly normal daylight brightness/temperature, even while we were seeing crescents with the glasses. Gradually the daylight seemed more and more like wearing sunglasses at noon when we weren’t. And then it got much darker – not quite full night – and we were treated to the most amazing ring of light. 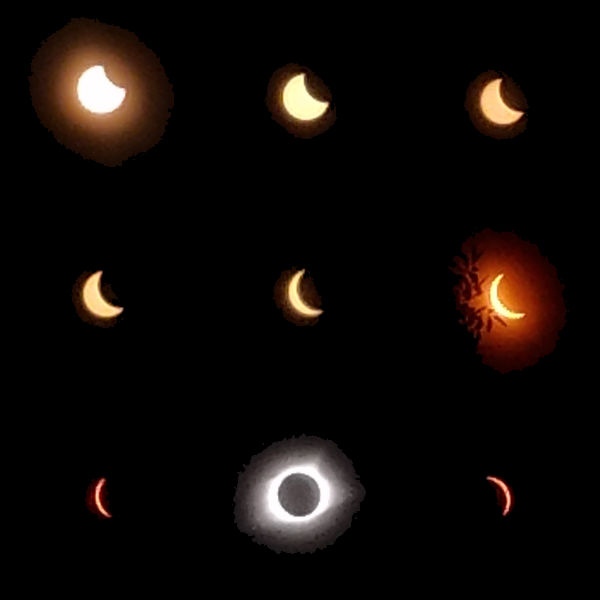 We saw the diamond ring effect very clearly but I didn’t manage to capture it in a photo. Thought these still came out pretty well though. And it’s definitely something I’ll remember for a long time – a weird, dreamlike experience.

While getting to my spot, I caught the sun through the sunroof and sunshade out of the corner of my eye… And yeah. Big bite. Then when I pulled onto a sideroad 10 minutes before to give myself a chance to relax, I pulled a Rump and glanced again. Then when shit was weird I looked to see what stars I could. Just one, too bright to be Mars but too red to be Jupiter, I thought. Saturn maybe. Or Jupiter. I didn’t even think to check Google Skymap, so apparently it was Venus.

There were definitely some beads and faint corona. I missed the whole instrumentation part of the experience.

Cellphone camera (Samsung Galaxy 7), total amateur, no tripod, without and then with a lens from eclipse glasses stuck over it. Hermann, MO.

those are great! and, that collage is excellent.

so apparently it was Venus.

ive heard from other folks that venus was visible even with a partial eclipse. i am so bummed i didnt think to look for it. i did look around at the rest of the sky at the start, but was pretty entranced during the maximum. ( didn’t get to totality here )

I’m pretty sure it was Mars, and I was on the edge of totality where Venus was out of the picture, which is kind of a turnaround.

Every single road out of Madras was a parking lot.

For all I know there are still people stuck in Madras right now.

In apparently clear skies, several minutes (?) before totality, these linear cloud formations became visible. The two white streaks are jet contrails. I assume the jets were above the clouds. The solar crescent is off the image, to the upper right. Albany, OR 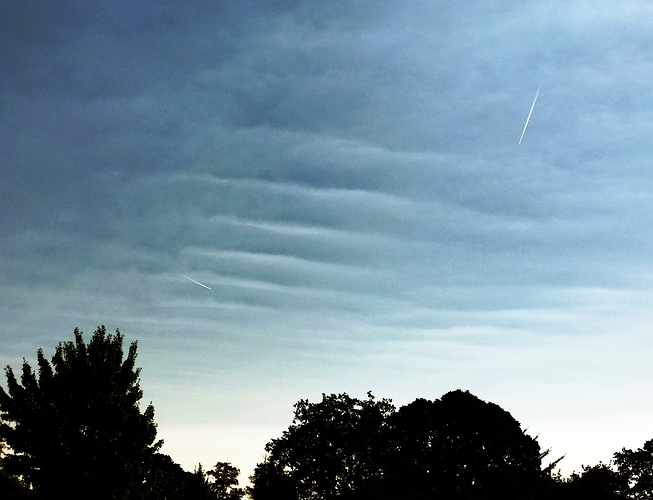 Judge Denies Motion for Continuance Based on Eclipse

Hey, it was worth a shot.

I am a little disappointed NK didn’t lob a ‘space probe’ across the path of the totality.

I thought the nuclear war was due to start today, unless the generals can get some valium into Kim’s cornflakes?

I didn’t get any good pics, but it’s something I’ll remember for sure.

It was kinda cloudy here, but my son and I got to see it. He even took a pic with his DS, using the one lens of his eclipse glasses as a filter.

I had hoped to drive south to get into the path of totality, but I just couldn’t justify spending 14 hours in the car for a couple minutes of eclipse. Now I wish I had. Partial eclipse was a total letdown from my backyard. The pinhole camera that I made didn’t really provide as sharp an image as I was hoping for. I realize that I could have done more, but it ended up being underwhelming in practically every way possible.