You’re mistaken if you remember this phrase from your intro to macroeconomics course; our brilliant president just came up with it a couple days ago. 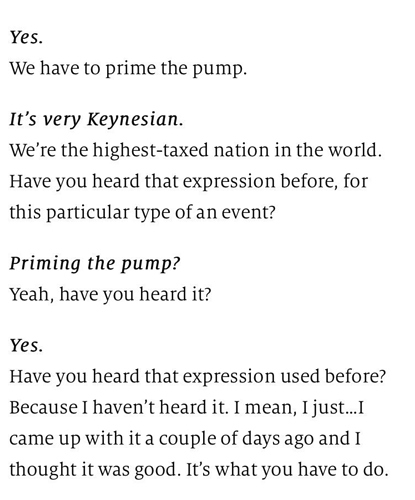 Sounds like a euphemism for what he does with Putin.

Yes, and when I was five, I invented the square knot. Dang parents had to burst my bubble…

I think the word he was looking for was “fluffing”.

[quote=Economist Q&A]Mr President, can I just try you on a deal-making question? If you do need Democratic support for your tax plan, your ideal tax plan, and the price of that the Democrats say is for you to release your tax returns, would you do that?
I don’t know. That’s a very interesting question. I doubt it. I doubt it. Because they’re not going to…nobody cares about my tax return except for the reporters. Oh, at some point I’ll release them. Maybe I’ll release them after I’m finished because I’m very proud of them actually. I did a good job.

Hope Hicks [White House director of strategic communication]: Once the audit is over.

President Trump: I might release them after I’m out of office.

Mr Mnuchin: Just so you know, I’ve already started meeting with Democratic senators and, you know, the support has been pretty interesting. I mean, I think a lot of the Democratic senators actually believe we’re on to the right tax plan to bring back business to America, and that’s what they’re all about, they want to grow jobs in their states, just like the president does.

Ms Hicks: And our plan has things like child-care tax credits which have never been presented before…

President Trump: By the way, so as you know I’m under routine audit, so they’re not going to be done. But you know, at a certain point, that’s something I will consider. But I would never consider it as part of a deal.

Right, got that.
I would never do it. That would be…I think that would be unfair to the deal. It would be disrespectful of the importance of this deal. Because the only people that find that important are the reporters.

Well, the Democrats say it’s important.
Well, don’t forget I got elected without it. Somebody said, “Oh but you have to do it,” I said, “Look where I am”. I was, you know, I was out front, I was asked that question, every debate, I said, you know, I’m under routine audit.

Mr Mnuchin: And the president’s financial disclosure has been longer than any…

President Trump: Plus my financial disclosure is 104 pages.

Ms Hicks: I think when people say that that makes it about the president and the politics versus the people, which is what we’re focused on.

What’s the URL for the conversation/interview in the OP?

conversation/interview in the OP?

Who’s this ‘Keynes’ guy? Trump invented it, just then. He said so. Just like that.

Don’t you believe all the bullshit that falls out of his mouth? It’s un-American not to. (Or something). Hail Hydra.

Sorry, I can’t​ keep that parody up, it feels… unclean.

It’s the one I posted. I just happened to see a section about his taxes that caused my nose to bleed a little.

I’m disappointed now that I didn’t go for “Confuses ‘Keynes’ with ‘Kenyan’ and blames Obama”, above.