48 Hours with Valiant Force; or JRPGs are Padded, Grindy, Trash

I’m a sucker for punishment. On every platform I own, I’ve played at least one trashy, grindy title. GB? Final Fantasy. GBA? Final Fantasy. PSP? Valhalla Knights. PC? Warframe. And now, we can add mobile to the list, courtesy of Valiant Force.

What do you enjoy doing in a genre most? WIth FPSes, it’s movement. With RPGs, it’s planning and executing a strategy. With racing, it’s getting caught up in the flow. Now imagine that a game had none of those qualities. Congratulations, you’ve created Valiant Force.

I’ve played through a lot of RPGs, mindlessly grinding. Phantasy Star Portable, hit end level without completing a single story mission. Valhalla Knights, reclassed my team into ninjas AND samurai, equipping them with all-enchanted gear. (turns out, you don’t need that in the first nor second playthrough). Pokemon? Caught 'em all. (In Blue/Red.) I played Warframe until it wasn’t any fun (three frames in). Point is, I’ve tolerated a lot of grind. But Valiant Force gets my goat.

You select a team of up to five characters and place them in a formation. Every player gets a Theia (healer-class) as their base unit and a random assortment to start them off. If you want useful units you either need to grind in-game Gems (of which you get a finite number), do one-time Boss Quests, or pay up for. Or you can spend the earnable common gold to get trash-tier units.

Battles proceed thusly: in PvE content, you always move first. You can perform Basic Attacks or move a unit a single square. You get to move every unit before your turn is over. In PvE. Your team won’t be able to down a unit in a single turn with Basic Attacks. Instead, much of “gameplay” consists of waiting five turns for the units to charge their Special Attacks. With me so far?

Unfortunately, your units are pretty trash at first. Your first 36 hours will be spent micro-managing your Home Base, waiting for the damn building timers to complete so you can level up your Player Level so you can access actual interesting content.*

After reaching Player Level 12 you can finally purchase random in-game weapons and equipment to buff your weak-ass units with. At PL 15 you can take your team to the Arena, where bizarro battle logic rules.

Arena fights go like this: you move second. The AI-controlled team moves one unit, then you move a unit, and on and on it goes. Whichever team has a more highly-merged 5* excluuuuusive character wins. Basically, don’t attack their Tank-class character until last and you’ll be fine. Unles they have a 5*. Or a 6*. Or a 7*. With transformation. And a summon.

Creep-tastic Character Art
Hey, you like lewding the lolis? This might just be the game for you! But we only drew ladies lewdly. Because everybody knows lewding guys would just be gay.

Exhibit A, your honour 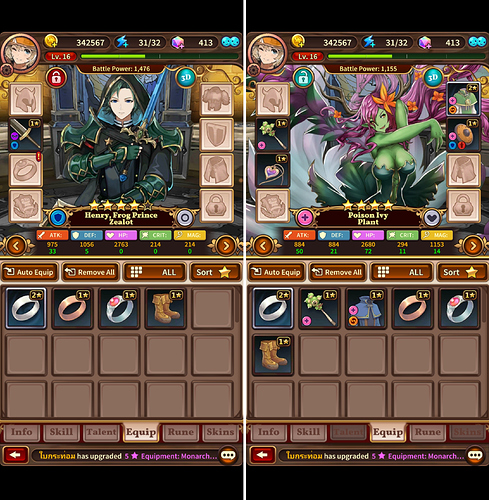 It’s superfluous to the max. So many bloated systems that just don’t add any FUN value. Want to equip gear? Either pay for it or grind out 20 Feathers to craft the base version. Then merge 10 copies of said base version to get a 2* version. And on and on and on.

The Bottom Line
I’ve spent 48 hours with this. Clearly, a lot of hard work and love went into this. Effort shines through at every level. The individual characters all have unique animations for actions, special abilities, evolutions, classes… It’s just buried under the weight of so much grind that I’m amazed they’ve managed to stay afloat this long.

Valiant Forces is a game best played by not playing it. It’s available now, free to start, on Google Play and iOS.

I think I’m done gaming for a long while. All these grindy, trash games wear deep on my soul.

Maybe I’ll go build a sandcastle. Or a castle. In minecraft. Where you make art, not arbitrary XP goals.

Wake me up for Valhalla Knights 4 or Destiny 3. Whichever comes first.

This has been HotTakes with @tinoesroho. He occasionally writes columns when drunk or peeved at JRPGs. His irregular column, EscapeRoom, is published whenever we get around to it. Don’t show him C&C Rivals.

Have you tried Gems of War? It has 1,001 systems, and nearly as many ways to spend money, but the game is totally playable without spending a dime. It’s available for nearly every system, although it only does cross play between the mobile and Steam versions. If you liked Puzzle Quest, this is the logical progression of that genre, and it receives frequent and significant updates.

Want to equip gear? Either pay for it or grind out 20 Feathers to craft the base version. Then merge 10 copies of said base version to get a 2* version. And on and on and on.

This is exactly why I no longer F2P. Most mobile games are very thinly disguised fruit machines. Just enough stimulation to make you addicted, not enough actual game play to satisfy.

If you want to play something on your phone, get XCOM. It’s an absolutely full-fat mobile port of an excellent PC/console multiplatform release. It’s cheap, has more hours of gameplay in it than I would care to admit to and there’s absolutely zero pay-to-win.

Full disclosure: I have installed some version of XCOM on every device I have owned that has a port of it for well over two decades now. The original dos version is tiny and it’s the first thing I install after windows and drivers on any new PC.

The devices may change but XCOM remains essentially the same. 320*240 looks fugly on a 4k TV but the original is tucked away in a corner of my current gaming rig. I probably won’t ever play it all the way through again but I know it’s there and that’s the important thing, in a Ship of Theseus sort of way…

If you want to play something on your phone, get XCOM. It’s an absolutely full-fat mobile port of an excellent PC/console multiplatform release. It’s cheap, has more hours of gameplay in it than I would care to admit to and there’s absolutely zero pay-to-win.

+1 to that. XCOM’s resurgence in recent years is an SRPG gamer’s dream come true.

Sounds a bit like Brave Frontier, which I used to play for awhile. Flashy graphics and zing-zing noises to pass the time while stuck waiting somethere, but very repetitive.

The only game I have left on my phone is Age of Strategy, a very retro wargame. Haven’t played it in awhile though. Some of the 'Choice of ’ games - choose-your-own-adventure stories but with a few variables/stats - were fun, but that depended on the writing.

Some of the 'Choice of ’ games - choose-your-own-adventure stories but with a few variables/stats - were fun, but that depended on the writing.

I think most of the choose your own adventure games suffer from Tell-tale syndrome… at first, I thought Tell-tale games were the shit. But after a while, it just all seemed to similar, hit the same beats, turned into a formula. I will say that that experience with scads of tediously formulaic visual novel style games made me appreciate Doki Doki Literature club a whole lot more.

I will say that that experience with scads of tediously formulaic visual novel style games made me appreciate Doki Doki Literature club a whole lot more.

That was a good one! Some real creativity there, and subtlety.

I’ve been playing a lot of Clash Royale again. I’m f2p and the new changes to the game means I have gotten a lot more free cards and legendary cards. I find the lightweight 3:00 match MOBA format great.