Because not everyone is a total weeb. Here are my picks:

Never been into anime myself, but IMO The Animatrix is top-notch stuff.

The Matrix sequels shall not be mentioned, but I wonder how many folks know the first one isn’t all there is of worth in the franchise…

Oh I can go on if anyone asks… yeah I admit anime is my guilty pleasure. I’d rather watch anime then most stuff on TV.

Ajin is absolutely brilliant. I’m not really an anime person at all but I liked Ajin enough to use one of the main characters as my avatar.

It’s an incredibly insightful (and quite provocative) commentary on the war on terror, the efficacy of torture, police brutality and many other light-hearted, jovial topics.

It’s on Netflix at the moment and it’s well worth a watch.

Tiger & Bunny
A superhero show aimed at the under 40 crowd. It follows the misadventures of Kotetsu aka Wild Tiger, who winds up as the assigned sidekick of a much more talented and younger upstart. This show started the trend of 3D models in anime, and it looks absolutely gorgeous.

Gintama
This show is a farce. A spoof. Ostensibly a show examining the invasion of Japan in the 1860s by USA, it features ronin Gintoko Sakata, nerdy Shinpachi, and overly strong space girl Kagura. The misadventures of the Shinsengumi also play a major role in this show. Absolutely hilarious. Bonkers. You should just watch it already.

About a year ago I realized despite liking anime, that I had actually watched very little of it. So I started watching nothing but anime in an impossible feat to “catch up”.

As a help to other people that might decide to do the same I have a few insights.

So if you have watched one or two titles in the past and decided it wasn’t for you don’t give up on anime.

As an added bonus AoZora has a nice features to find new anime and also a friendly community to ask questions and share anime stuff with.

I will follow up with another post with some of my favorites. Some of which have already been posted above.

I even bought a copy of it. Short enough to watch in an evening, weird enough to make you go “hmmmmm” for sometime after.

so many others, i’ll have to give this some thought…

Here are a few to start:

Ergo Proxy: Serious, thoughtful and moody. I don’t want to give too much away but it is an epic journey: physically, mentally and spiritually. It asks familiar sci-fi philosophical questions about who we are both collectively and personally. It asks what it means to be alive and to be free. What is love. What is religion. What is God. It raises questions about the line between personal choice and the needs of the many. It touches on the implications of our current treatment of the Earth. It asks if our machines have become more alive and we have become more mechanical.

One note: The first episode will be a bit confusing. The entire season is spent explaining what happened in the first episode and then blossoms to show much more of the world than just be be a backwards explanation. So give it a few episodes. You wont stay in the dark dome that long. Lot’s to do and see. 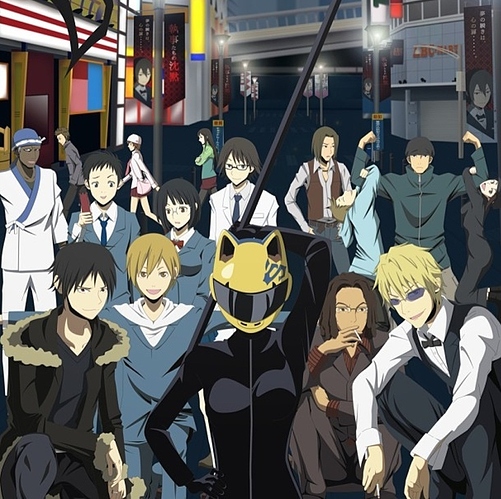 Durarara!! : Where Ergo Proxy is often dark and under lit, Durarara!! is vibrant and full of color. The show has a large number of characters and is made of of multiple story arcs. A little tip on watching. Every story arc starts off a little confusing. Each of the early episode introduces a characters and puts them on some story trajectory. Next episode another character and another trajectory. This will go on for a bit and then character’s will start to cross paths and interact. Watching what seems to be separate stories all come together at the end of an arc is a thing of beauty. There are also longer threads that weave across the smaller arcs. Ex. A random bystander hurt in an early street brawl ends up being the central bad guy late in season 2. Another fun thing is that all and I mean all of the characters have interesting aspects. Some might seem like a boring extra character but eventually we get around to getting to know them and we find they have been being exceptional in quiet ways the entire show. Often we find they were actually secretly manipulating earlier story lines. I love nearly every character and feel many if not most could be the lead in their own show. And the writers to a wonderful job evolving everyone. Some shows with a large cast only evolve a few and the rest are rather shallow.

Note 1: I like complexity and I hate shows with a set format (Ex: every episode we solve a crime). The complexity is managed such that arcs go (Chaos —> A HA!) so by the end of an arc even your slowest friend will get what happened and not need you to explain it to them.

Note 2: The first arc is my least favorite. The two characters that end up being the central characters of arc1 are annoying but thankfully fade off and are barely seen again. Power through. The awesome characters we met continue on to do great things.

I forgot to mention Death Parade. The single best psychological thriller of any medium in recent history. Two people enter a bar and are forced to play a game with the highest stakes - life itself. Every episode examines our ideas of morality and justice, and what it means to be human. No spoilers, but it also has a fantastic opening theme.

I forgot to mention Death Parade.

I wasn’t sure if I liked it at first but by the end I LOVED IT.

I’ve not watched much anime in years, but I’d recommend Azumanga Daioh. Mrs strokeybeard fell asleep during Cowboy Bebop and Read or Die (the OVA, not the series), but she enjoyed this.

I’m also a fan of Boogiepop Phantom, in which a series of mysterious events occur as the aftermath to something that happened just before the series starts. It’s a bit like SErial Experiments Lain, but weirder.

Quick post to highlight the already mentioned anime I give a string second recommendation to:

Two of my favorite scenes are when Sato storms the base to rescue Kei (his use of their skill is brilliant then), and when Sato rides the demolished skyscraper (I might have stood up and yelled with joy).

Really loved FLCL. I may have asked this on the other site but have you seen Flip Flappers? It’s a different story but there is a fair amount of overlap. A young girl instead of boy meets a mysterious girl that opens up their world to a magical new world where things are a bit trippy and much of the action is clearly a metaphor for all that crazy stuff that happens at puberty. Give it a few episodes to get going.

Well, if you’re going to break out the Ghibli you should also watch Spirited Away, and if you can find it Panda, Go Panda

FLCL is in my top 3 along with Ergo Proxy and Serial Experiments Lane, but there are alot of jokes about anime and manga in it, so you miss a bit if you’re not already familiar.

Too much of what I like are terrible intros to anime because the are about Otaku or Hikikomori. Welcome to the NHK is probably my favorite Hikikomori one. I’m a little embarrassed about how delightful I find Kiss Him Not Me.

For the most part, I can’t stand anime, but there are two exceptions:

The bamboo is great!