Reed said he was reviewing the recommendations from a committee selected to come up with a plan to address the fate of Confederate symbols around Atlanta.

Streets named for the Confederacy in Atlanta to be renamed

Atlanta streets named for Confederate generals and leaders will be renamed.

In a report given to Reed late last week, the committee recommended:

*The immediate renaming of “Confederate Avenue, East Confederate Avenue, and any street named after Nathan Bedford Forrest, John B. Gordon, Robert E. Lee, Stephen Dill Lee, or Howell Cobb. The aforementioned were significant Confederate military leaders and actively involved in white supremacist activities after the war, making them undeserving of the honor of a street name in Atlanta.” The panel also recommended that:

Sounds good so far. There are, of course, those opposed - the first article there includes an interview with a gentleman who enjoys going on regular jogs while carrying a Confederate flag; he is apparently under the impression that, if the Confederacy had won the war, slavery would still have been abolished and “states rights” would have been upheld.

I wonder if the confederate jogger ever runs into Baton Bob? Probably not, since Bob tends to stick around mid town and this gentleman is down in Grant park…

I’d never heard of this Baton Bob… I assume you mean this one? 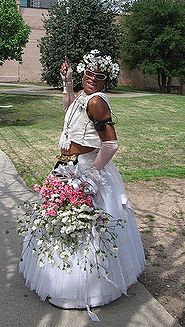 Bob Jamerson, known as Baton Bob, is a well known local character and costumed street performer, currently based in Atlanta, Georgia. Baton Bob used to live in St. Louis, Missouri and in both cities is a significant local personality. He typically marches down urban sidewalks dressed in a tutu and occasionally a tiara. As his name suggests, he almost always twirls a baton as well. His stated goal is to amuse and cheer passersby, to "lift people’s spirits and put a simple smile on people’s faces d...

From what’s on the Wikipedia article, it sounds like that could be an… interesting meeting.

There is only one Baton Bob! He’s a city-wide treasure!