Did you know someone before they became famous? Did you share an elevator or a sidewalk with someone who everyone knows? Tell us your stories.

I shared an elevator with Tony Randall in a building owned by Planned Parenthood in NYC in 1983.

I think the closest would be being in Drama class with Lara Chorostecki: 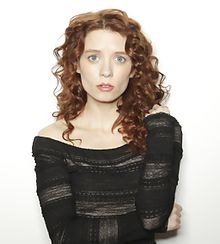 Lara Jean Chorostecki (born September 24, 1984) is a Canadian actress known for her role as Fredricka "Freddie" Lounds in the American psychological thriller–horror television series Hannibal, and as Sergeant Krystina Breeland on the critically acclaimed Canadian series X Company. Chorostecki was born in Brampton, and attended Mayfield Secondary School. Chorostecki's father worked in a bank and her mother was a French teacher. She is of Polish and Scottish descent. She has a brother. Chorostec...

I can’t really think of anyone else from my past who has achieved any sort of fame.

I have two, off the top of my head.

One year, my husband’s band was playing at Dragon*Con, late in the evening. All of a sudden, this guy comes running up to the booth and proclaims that this is just the music he was looking for… it was Ted Raimi…

Anyway, of course he got free CDs (cause, Ted Raimi), he kept in touch for a while, and there was talk of him putting together a documentary on the LA Death Rock scene, which I guess never panned out, where they’d do some music for it… It’s been a while since I chatted with him, but he’s a rather cool guy. Weirdly, if I ever did get back in touch and he still wanted to do that documentary, I’d be in a position to help out more personally, as the LA punk scene was part of my master’s and dissertation work.

You went to Mayfield? It’s possible we lived just blocks from each other at one point.

I taught at a high school Kate Nelligan once attended. So there’s that. And apparently I’ve been in the same pub as musicians who have cracked the Canadian Top 40, but since I didn’t know what they looked like it was a bit odd. My friends were all “he’s over there! Well don’t look!”.

Yep. I wasn’t in the collection region, though: I attended as part of the Regional Arts program, so I’m not sure about the “just blocks away” part.

I was walking down the sidewalk in the Georgetown neighborhood of DC, and I did a sidewalk dance with Michael Douglas, who seemed to be practically dragging Catherine Zeta-Jones along behind him. It was winter time and he was wearing a sable colored wool coat. He seemed upset, so I stepped aside and let them pass.

I was at a reception for a Bach 400th birthday concert in Salt Lake City when Bob (we always called him Bob) Redford walked by.

At the risk of giving too much away, I worked with Michael Bublé’s aunt (never met him, though) and was in the same karate class as Carly Rae Jepson and Olympic swimmer Brent Hayden.

I used to work with Amy Poehler’s mom. We were quite good friends, really.

I once served frozen yogurt to Lou Diamond Phillips and his little cousin. It was in like 1989 or 1990, and he was so super nice. He even asked me my name when I was a little starstruck. Or maybe it the fact that he was SO HOT.

Mostly, he was interested in hanging with his cousin, which made me think even more highly of him.

I feel so like I’m name dropping! But that’s the point of this thread I guess . . .

SF writer Katherine Asaro was in our writers’ group before she sold her first book. We critiqued one or two of them before she made the big time.

Oh, and it might not mean much to this crowd, but I also once met Dave “Tiger” Williams at an archery shoot.

Not bad for a small town.

Incidentally, I also used his case to shut up an especially dickish Criminology teacher. Earned or not, he thus holds a special place in my heart.

I knew Dave Chappelle when he was on hiatus. The first time I met him, I had no clue that he was Dave Chappelle, because I don’t recognize faces. Also because this was a little town in Ohio that wasn’t on any highway, and what in the hell would Dave Chappelle be doing living in a place like that?

I am also one of three consecutive generations of men in my family to have met Bill Walton in an airport. All on separate occasions.

That’s where I met Lawrence Ferlinghetti. He was blind and nearly 100 years old at the time, but he was still going strong.

I’ve waited on the Wachowskis a couple of times in 2008. It didn’t occur to me at the time because the first had started her transition. I think they liked the restaurant for its small size (for anonymity) as well as the crepes and other French-Algerian fare.
So glad the owner never realized who they were. Greedy asshole that he is, he probably would have driven them away with obsequiousness.

I met Robert Townsend once, when I was working an Oracle tradeshow in SF; I think he was as surprised to get recognized as I was to see him at a tech conference. But I kept the fangirling to a minimum while scanning his badge, just telling him that I appreciate his work.

I will say this; I noticed that anyone famous whom I’ve ever met and actually touched had really dry hands. Too much hand sanitizer, maybe?

I’m not sure if this counts as a brush with greatness, but I was new to the West Coast and was beachcombing. I came across an old lady sunbathing near the water. The tide was coming in and her hat was about get picked up by the tide. I called out to her saying, “Excuse me ma’am, but your hat…” She cut me off and said something to the effect of “Of course I know about my hat” and gave me a weird look. I shrugged and walked away. Minutes later, the hat got swamped by the wake of a passing coast guard cutter and washed out to sea.

Later in the afternoon, I stopped by at the local scifi bookstore. The bookstore was crowded and a bunch of chairs were arranged and, when asked, the proprietress said that a new Earthsea collection had been published and the Author herself was coming in to do a signing. I picked up a copy of the book and was looking it over when the door opened and the old lady I’d met on the beach came in. The smile slid off her face when she caught sight of me with the book in my hand and quietly said, “Son, if you think I’m going to sign that book, you’ve got another think coming.” I asked after her hat and she scowled at me. I laughed, tossed the book at her and left the book store.