Buttons not rendering on mobile?

Seems to have started since the move?
iPhone in Safari (iOS 11.0.2, iPhone 6s+)
All the buttons in the interface are just generic squares-
Screenshot: 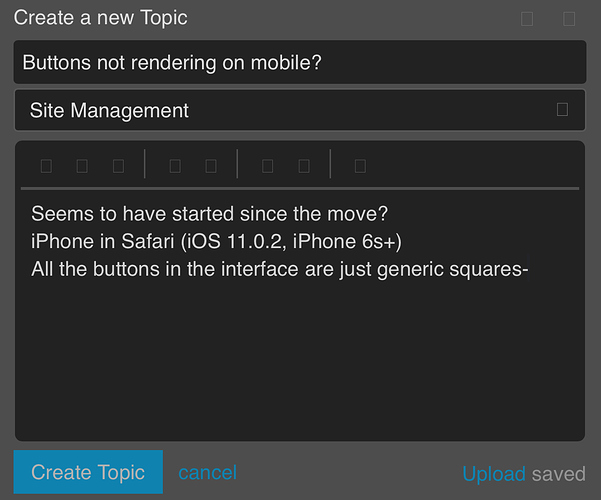 If it helps: buttons seem to be okay on Android.

I’ve has a strange problem on desktop with dropdown menus populating themselves with the paragraph glyph.

We are running a newer version of Discourse here than we were at happymutants.space. That may be the difference, but not the underlying cause.

Which theme are you using? Does changing it have any effect?

Have you tried the Discourse App? I’d be interested to see if you are getting different results.

All of the buttons are decorated using glyphs from Font Awesome, so it may also be worth checking out if you want to investigate further. I believe we’re using 4.7.0 here, but it looks like it’s the same version at the old location as well. In both cases, they are hosted internally instead of a CDN, so I don’t imagine that to be an issue.

I’ll look into this a bit later and see if there’s any other troubleshooting I can do. I don’t have an iOS device, so I’ll have to rely on you and others to report back.

Turned out to be my ad blocker. Whitelisted this new url and all is well.

Thanks for following up.

I’ve been having problems logging in on my iOS device. The fields don’t match up with the screen so trying to touch the password field instead takes me to the Facebook login or whatever.

I think I have an adblocker as well, so I guess the first step is to disable that to check if that’s causing the problem.

To be fair, there is literally nothing nasty in the background here that needs blocking, as far as I can tell: 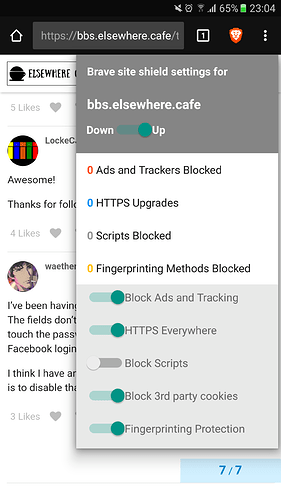 I have to keep the scripts unblocked because otherwise it stops the whole site from displaying properly (something to do with whatever discourse is powered by, I guess) but I can’t think of a single other site I have been to that gets a grand total of 0 in everything on the list.

It turns out my ad blocker wasn’t active anyway. So it’s just a matter of the fields and buttons not matching up when rendered on iOS Safari. Maybe it’s just me, but I can’t see why that would be.

I finally was able to log in on my phone though, so it’s not a problem for me anymore.

I’m not sure there’s really any reasonable way for an application like discourse to degrade gracefully without seriously compromising functionality. At best, it’s probably not high on their priority list.

I can’t think of a single other site I have been to that gets a grand total of 0 in everything on the list.

We’ll try to keep it clean.

So it’s just a matter of the fields and buttons not matching up when rendered on iOS Safari.

I don’t have any iOS devices to test with, sorry. Is anyone else experiencing this? The theme (other than the default) shouldn’t come into play before login, so it’s probably not that. I’m glad you were able to work around it, but I’d hate for others to have difficulties logging in if we can figure out how to fix it or at least narrow it down so it can be sent upstream to be resolved.