I’ve been invited to go to an event that is listed as BYOB.

a safe space for queer people and allies to enjoy live country music and dancing.
The dance will be held inside a barn with high ceilings and wood floors.
[…]
BYOB
[dance starts at 7:30, concert at 9:00]

So it’s BYOB for alcohol. I want drinks, but don’t want to get wasted. And I don’t do liquor anymore for that reason.

So I’m considering bringing a couple of the big cans of Twisted Tea. No bubbles so no hiccups. Weak alcohol, so no drunkenness. Can probably fit in my pockets (if I dress for it) so won’t need to lug around a 6-pack or such. Should last 4+ hours. Gives me a built-in limit to my drinking.

Is that weird or appropriate? I really have no idea. I’ve never been to something like this before.

Another tip for avoiding drinking too much - bring a big soda or bottle of water and drink that at the start. It gives your hands something to do, and it prevents anyone from putting a drink in your hand. Most people drink heavily the first hour or 2, then slow down. So if you can get through the start of the party without drinking alcohol, you can enjoy it at your own pace.

The whole thing sounds like fun, though - have a great time, and let us know how it was, please?

So it’s BYOB for alcohol.

It doesn’t say what kind of bottle, though I suppose a bottle of Pepto Bismol might not apply (however useful it might be at the party). I think what you suggest is fine. IMO, non-alcoholic drinks are fine too. There might be others who don’t want to imbibe.

it’s BYOB. that doesn’t mean it’s only alcohol related… i’ve always taken it to be “bring whatever you want to drink” – so if it’s tea, or water, or MD2020, you do you. just have a good time!

I’m wondering if there’s a social component to this, though. Like, maybe bring a 6-pack of some type of soda or sparkling water to put on the table to share, you know?

doesn’t that kind of run against the whole “bring your own” part, though?

I’ve always understood BYOB to mean “bring your own beverage” - meaning that the hosts a) are short on funds; b) don’t have a liquor license (hardly a common household item); c) don’t want to be responsible for possible drunk-driving accidents; and/or d) want their guests to have just what they want to drink because not everyone can or wants to drink beverages that contain alcohol.

The first choice seems to be the most common reason.

Well, it also doubles as a host gift. You know: thanks for inviting me and feeding me. Often a bouquet of flowers or a bottle of wine.

I would add e) the hosts don’t drink alcohol but don’t mind if guests bring their own.

doesn’t that kind of run against the whole “bring your own” part, though?

Can’t speak to your particular circles, but I often see BYOB treated a little like a pot-luck, for drinks. Not quite to the point of bringing some for everyone, but an excuse to get/let friends to try out your favorites.

I’ve also seen it done as “bring drinks for yourself”, though, so… ok, I’m not helping here.

Whatever potable you consume, potent or otherwise, just don’t consume it out of one of these, and you’ll be fine: 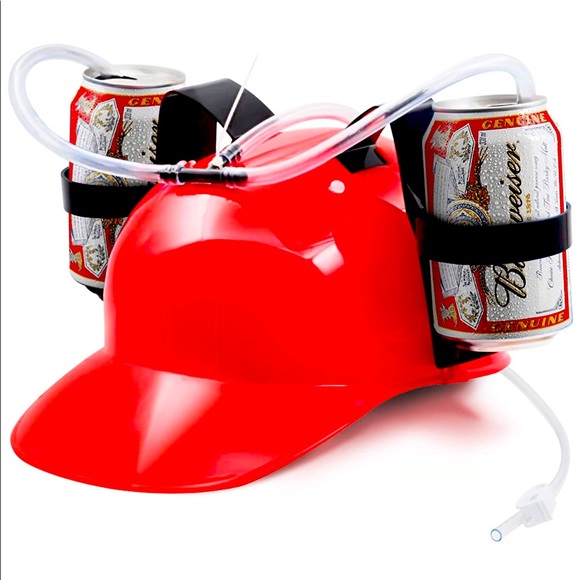 HOWever, there’s this one…a bit more subdued in color: Can’t speak to your particular circles, but I often see BYOB treated a little like a pot-luck, for drinks.

oh yeah, this makes sense. but yeah, it definitely could go either way. socializing is SO confusing!

Reporting back. This was an amazingly good event. As planned, I had precisely two drinks.

The crowd was a total mix - there were kids, dogs, etc. And people brought coolers for their drinks. Not many people were drinking, but those that did were doing same as me. They brought a cooler with a couple drinks and that was it.

Much more impressive, I only saw one cellphone during the entire night. Literally no one was just looking at their phones. Everyone was just talking to each other, dancing, or whatever. That’s actually what stood out the most to me - everyone was just living in the moment. Which might seem an odd thing to comment on, but it seems unusual now.

At dusk, there were bats flying low between us, snapping up whatever insects they could find.

Then in the barn, it was dance time. And that was way more fun than I expected.

There was an old lady sitting to the side just enjoying the music, a woman on the opposite side of the barn just sitting there knitting, an exhausted mother sitting in the middle of the dance floor with her kid while people danced around them. There was a cowgirl dancing like the star of Flashdance doing some difficult moves, a barefoot hippie dancing with her dog (he was a good boy), a barefoot new age chick dressed only in fur and feathers and bones, guys in skirts. And of course a flamboyantly gay guy prancing around the dance floor.

It was wonderful. And now I know what to expect from BYOB around here. I was hesitant to go out and do this, but wow, it was totally worth it. And my kid had such a great time.

Thank you all for your insight and suggestions.