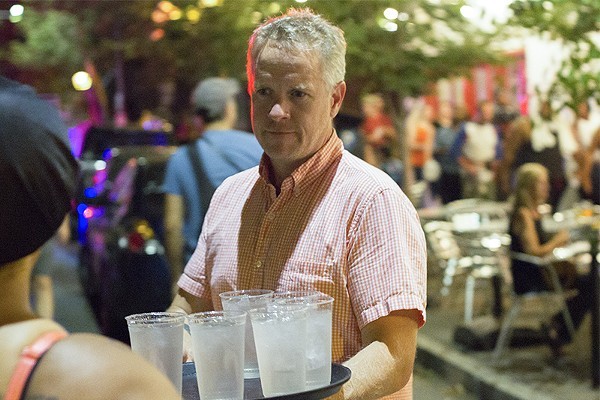 On Friday, Pi Pizzeria was gassed by St. Louis police officers who were marching through the neighborhood after protests took an ugly turn a bit...

St. Louis Metro Police, as well as St. Louis County Police and most of the little city PDs in the county, have serious problems with racism, violence, initimidation of citizens, raising revenue through speeding tickets that target poorer areas and people, and in at least one case, stealing that revenue and going on a tropical vacation with it.

I’ve personally seen them beating a trans woman (they initiated the violence), and one of them fumbling and dropping a gun while drawing it on the back of a running protester, in my general direction. (This is why I don’t go to protests here anymore; intimidation works I’m sorry to say.) So I’m not sure why it surprises me that they’d gas a beloved pizza joint because its owner has been critical of them and has passed out water to protestors, but it does.

Unfortunately, this is only one of many stories I have seen that show St. Louis police have a problem above and beyond those of other departments. Any serious effort at targeting gangs ought to start with them.

“We Love Our Police” yard signs

“We Hate Everyone Else”

Things that I never would’ve thought I’d see in my lifetime but which now seem highly probable:

These are frightening times.

They are deliberately trying to inspire fascist retaliation against the pizza shop, and they will likely succeed.

It sucks. The overall situation is exactly as bad as it looks.

But it isn’t irretrievable. If enough people act in time, it can be stopped.

Liberal militias made up of citizens who don’t like guns but finally felt that they had no choice but to bite the bullet and exercise their right to bear arms to protect themselves against the gang in blue.

You could amend this to add violent “conservative” authoritarians - the racist jackboot licking supporters of the gang in blue. These people have long believed that “lib’ruls” don’t own guns. They’ve always been wrong, but I didn’t think we’d be this close to disappointing their assumptions in my lifetime. Maybe it’s a Michigan thing (because so many people hunt), but I’d have to dig pretty hard to find a family that didn’t have any guns at all.

There are some things St. Louis could do immediately to help improve things. Dumping O’Toole on his face and putting someone less terrible in the position is one. 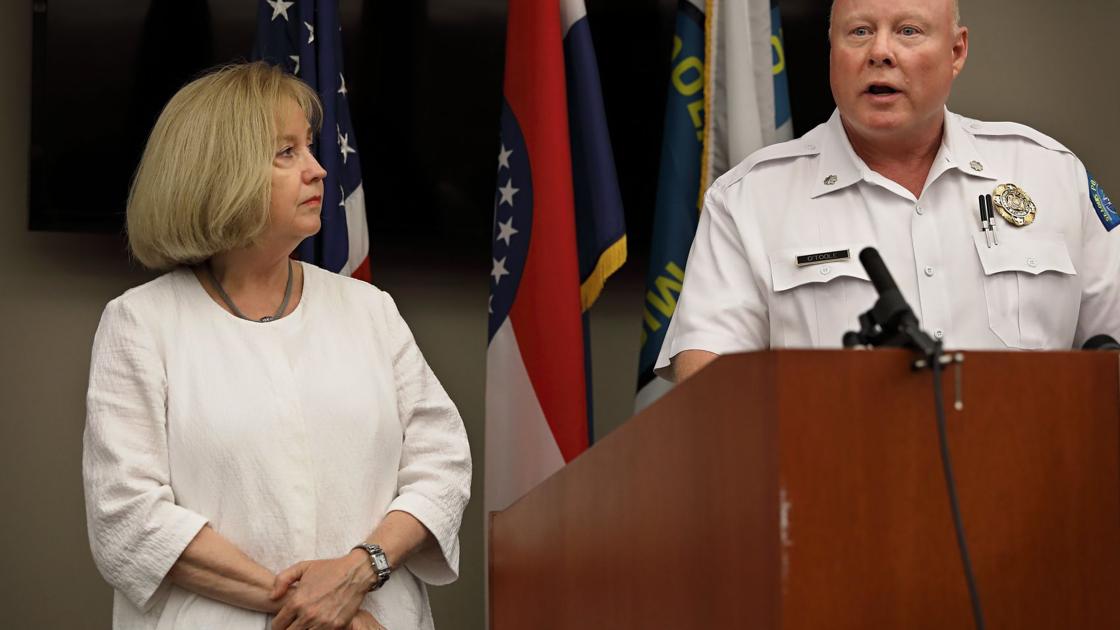 But our wishy-washy new mayor’s answer to every problem is “it’s too big to solve” or “we need to take this slowly.” As in, we literally can’t reduce the number of times cops shoot black people because the real problem is institutionalized racism, or lack of economic opportunity, or some such. We can’t have a new police chief for months because we have to do a national search and have dozens of people collaborating on the decision.

But our wishy-washy new mayor’s

Y’all okay down there?

The mayor seems to be a bit worse than wishy-washy, unfortunately.

Thank you to police officers & other 1st responders for the outstanding job that you have been doing. https://t.co/7dAD8PNCT6 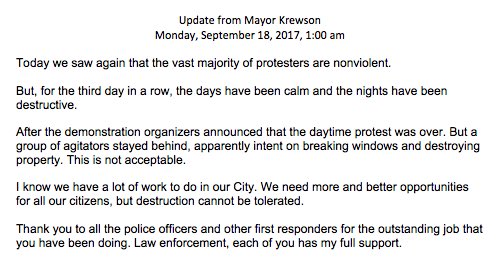 Lyda Krewson has already spent $282,438 in her quest to become St. Louis' next mayor — but no need to worry about her burn rate....

She’s that kind of centrist. She did, after a couple more days, say that the police have overstepped their bounds a bit with the “we own the night” comment, the “our streets” chant, and that Internal Affairs was looking into it (but face it, they can get away with murder so being assholes to citizens isn’t going to be an issue). I’m not sure if she commented at all yet on surrounding and arresting 100+ people including reporters, while shouting at them to “disperse”, nor on the gassing of the pizza place.

She has acknolwedged, in weak and general terms, that police tend to be violent and racist while also basically shrugging and saying it’s not a problem we can solve.

Her relationship with the police is kind of weird though. Back during the mayoral campaign, the previous chief had announced his candidacy. Krewson, then an alderman, told him he needed to resign if he was going to run, and with some other aldermen pressured him into dropping his bid. And then on day 1 when she’s in office, the two of them have a private meeting for a few hours “to discuss the future of the police force”, immediately after which the chief resigned and said something about wanting a beach vacation. And the police officer’s association said they wondered if they were going to regret supporting her beacuse she hadn’t talked to them and didn’t want to hear their concerns.

Watching a friend’s livestream on Facebook right now. There’s a huge protest consisting mostly of white allies who were specifically called out for this one, near the stadium where a Billy Joel concert is going on. There are a shit-ton of cops in riot gear with gas masks about a block away from where people are peacefully gathered. This is in contrast to the scene as the concert-goers arrived, where the visible cops were on bicycles and wearing shorts.

There’s been no violence so far, but since the cops are 100% ready and waiting, I predict a window is going to get broken “somehow” within minutes.

A homeless guy came up and told her how the cops beat him with a nightstick and arrested him the other night just for being on the wrong block.

edit: I’m pleasantly surprised, there was no gassing and no mass arrests as far as I’ve been able to tell. The protest broke up and everybody went home.