Cold Air, Warm Hearts - A Winter of VNs and Reality

My heart raced. She was waiting under the tree; her fur-lined hood down, snowflakes gently drifting onto her hair. Her pink earmuffs stood out against the white snow. A fairytale beginning? Or another visual novel?

The medium of the VN (Visual Novel) lends itself to examining intra-personal relationships and dynamics. Some are short. Some are long. They can be meditative, intriguing, and fickle. Or, they can subvert expectations and reveal underlying truths about our existence. They are a blend of novel and cinema; their impact relies on a synthesis of creator’s craft and the viewer’s memories.

Some VNs are more involving than others. Take Analogue: A Hate Story, or maybe Don’t Take It Personal Babe, it Just Ain’t Your Story (from the same author) - both of which rely on the reader’s own curiosity to explore side-stories and interactive features to expand on their experience. Some VNs present themselves as RPGs, like FATE/Extra. Others yet place the player as the protagonist by having them act out their character’s actions.

Winter is the perfect time of year to open a VN. The melancholy of the cold weather, the early sunsets, Zwischenzug, a time of growing close and apart. 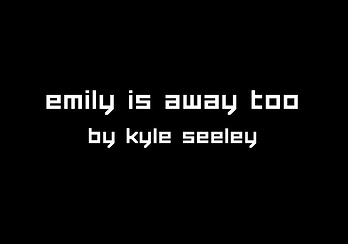 Emily is Away Too perfectly recaptures a youth online, a distillation of the angst of change and intra-personal conflicts. It rings true to the emotions.

It is perhaps the most involved of the Visual Novels; the player chooses messages, then “types” to send them. In Emily is Away Too, you play through a final year of high school in the form of five chapters - split conversations that you hold with the two main characters - the titular Emily, and new character Evelyn. (This game’s a sequel to the free Emily is Away, available on Steam and Itch.io) 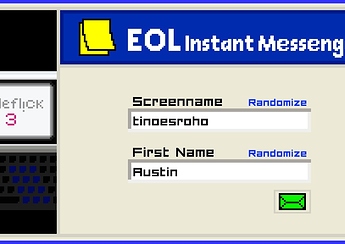 The game interface is a pastiche of AOL and Windows Live Messenger. That it recreates the atmosphere is the impressive part.

It’s hard not to empathize with the characters and their plights. Dealing with fake people, trading tastes in music, helping them deal with jerks, helping plan events and outings - all very much real. Things I’ve dealt with - and am still dealing with - in everyday life. 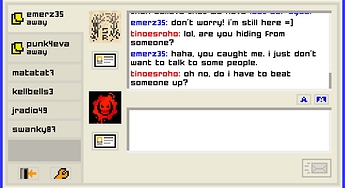 Things come up. Sometimes there’s a case of Crouching Steve, Hidden Chad. (Dammit, Steve.) Or sometimes you help with homework.

You can expect your first playthrough to last about four hours. During one specific chapter, there will be quick-time events: your responses will have to beat the timer. (You’ll see it as a gray progress bar.) This is a key mechanic that matches the story beat.

Spoiler: you can’t always be there for everyone.

Sometimes your character will say things that you definitely didn’t intend to. This is also a key mechanic for the story.

Overall, I found Emily Is Away Too to resonate. Highly recommend picking it up.

I meant to write a focused article, something that condensed my feelings. I’m sorry. It meandered more than I intended it to.

The Visual Novels reveal key truths about ourselves and the world around us. Every one of them - from Katawa Shoujo to the grimdark Doki Doki Literature Club has taught me something. (More on DDLC in a bit. Time for a musical interlude and a few shoutouts first.)

This interlude also acts as the end credits.

In the end, I’ve remained friends with two of my flames. Watching them achieve happiness has given me hope. For the first time, I can see freedom. When summer comes, I’ll be ready for my life to truly begin.

When he isn’t breaking hearts, tinoesroho can be found procrastinating on the BBS. EscapeRoom is written and published whenever the wine budget allows. For more EscapeRoom content, click here!

I was just thinking about these a few days ago! Watching a rather unsatisfactory anime made me think about how much fun I had playing DDLC (up through the point where it ‘ends’ and everything changes, although I haven’t kept playing from there yet). I looked up what genre it was to see if there were others and there are, a lot.

The one that seemed to have the most high ratings was Muv-Luv series, but it looked big so I marked it for maybe to try after Christmas. In the meantime, this Emily is Away set looks interesting and small enough to bite. I suppose I’ll start with the first. It reminds me of one I saw before and also want to play, Digital: A Love Story, which is set in late '80s BBS chats.

ETA:
Also, on the reality notes, you’re right, it can be very hard to see when things are that way for someone else, no matter how close you are. And very hard for someone in that spot to share. Calling the ambulance, thinking “what did I miss? she seemed fine a few hours ago.” is kind of an indescribable feeling.

I second your call to hold tight the ones you love, and that there are always people to listen.