Filed to: Hiding Something

Sentient alien sponge Donald Trump just hijacked the live broadcast feeds to declare airstrikes on Syria, something he fiercely and publicly opposed. Something something Killary rabble rabble something.

One wonders what he’s trying to hide this time.

He’s already done that shit. It is a new season of Resident Apprentice. He didn’t get much pushback the first time around, unlike what he’s getting now on TPP and other asks from his fellow travelionaires. So back to the basics.

yep, that pee tape is totally legit, i bet. and who knows what his lawyer had recorded. he’s trying to distract us all with the missile strikes.

Does anyone remeber this?

Um…all of everything he’s ever done wrong?

Why is it always “retaliation”? What happened to things that sometimes worked without too much destruction, like, I dunno, negotiations, economic sanctions, et al?

Because nobody ever said: “Now that our nation has imposed economic sanctions, it is not the time to undermine our Commander in Chief with petty partisan allegations.”

Yet? (she murmured, hopefully) 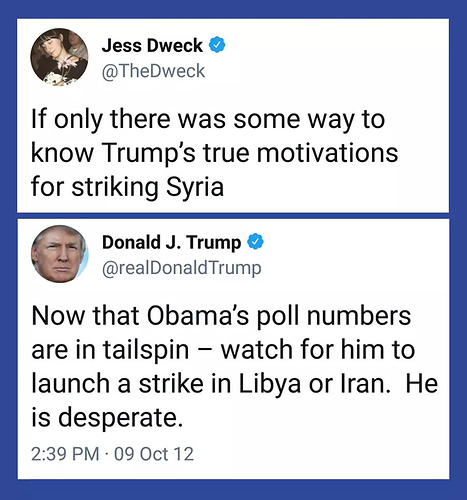