The most fun I’ve had in games is when the normal rules are tossed aside in favor of a gimmick - such as playing Fire Emblem with only Healer characters, Smash Bros with Dreamland Madness (Dreamland, Kirby, Damage 300%, Items High). Chess, for example, is greatly improved with the gimmick of “each side has five minutes to live”.

What gimmicks do you enjoy most with your games, board, tabletop, sports, or otherwise?

I enjoyed doing a pacifist run for Deus Ex. There’s only 2 set pieces where you have to kill someone (well, technically it’s possible to exploit past them but I’m not that skilled). It completely changes how you approach the game. Mind you, I’ve not found any other FPS that’s as flexible in play style as Deus Ex.

Old school Deus Ex is way more flexible than Metal Gear (counting boss fights against robots as lethal) by comparison. I think the only Metal Gear game that allowed a truly non-lethal playthrough was Portable Ops.

I don’t often play FPS’s because they don’t measure up to Deus Ex, and I include Half-Life in that as well. Portal was pretty decent, though.

there was an old arcade game called gauntlet which allowed 1-4 people to play at the same time. you had to select one character type to play for the whole game and if 4 played there would be one of each type. there was a fighter who was slow, somewhat clumsy, with a powerful but slow moving throwing weapon. there was a wizard whose aerial weapon was powerful but he was the slowest character with second worst grapple attack and second fewest health. the valkyrie was very balanced, and then there was the elf who had the fastest aerial weapon and the highest speed but had the lowest health, the lowest grapple the lowest aerial damage. the thing was that along the way there were items which would improve all aspects of the characters. the one which improved the most over multiple items was the elf. so if i started as the elf and could carefully complete the first 10-12 levels i would collect enough potions to have a character which could shoot an arrow with enormous power. basically if i could last through the first 20 screens i could play the game until i got bored with it and still have hours of play left to the character.

That takes me back, I loved that game! 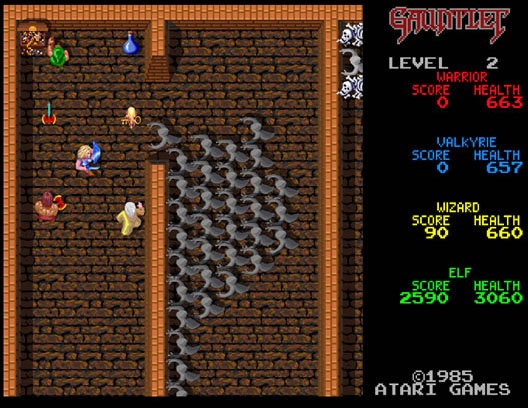 I was playing Bauldur’s Gate 2 on my ps2 (kind of like Diablo) with my Granddaughter who is going into the third grade. She was getting bored with the hack and slash so we made up some other games.

I like doing low level playthroughs of JRPGs when I replay them, though I am nowhere near the average level of 16 FFVI runs or whatever. It makes the games faster and more challenging. Undertale’s “hidden” modes were great for that reason too. Like, I beat FFX recently with a low level - but with the importance of weapons and cheesing effects made the last bosses simply a grind and getting auto-item stuff makes it easy, and those you can get with zero experience.

I tend to enjoy rogue-lite games so in my typical playing of games, so I really don’t need extra challenge often.

That reminds me, I quite like doing theme parties in Icewind Dale 1&2 - all clerics or all mages or all thieves.

A few weeks ago I went to GenCon and played a session of the tabletop RPG Star Wars: Edge of the Empire. The GM (a guy from Fantasy Flight) was energetic & fun, and at one point he was playing a junk dealer and said “OK, if you want this item, you’ve got to find my contact. He’s a guy wearing a blue hat and a blue shirt. And I need you guys to find some spare parts for me, ok? Get that stuff and we’ll talk.” We all looked at hm and wondered what we should roll. He just smiled and said “No, seriously, you have to go actually find them.” In the middle of the game we had to get up and do a scavenger hunt in the room to find spare parts the GM had hidden, and find a guy in a blue hat who’d give us some info. It was a great way to give us a little break and throw out the usual RPG rules for a bit.

Reminds me of a time when I was playing in a room with several large groups, one of which was playing Call of Cthulu. Some idiot in that group chanted “Hastur, Hastur, Hastur.”* Every GM in earshot immediately picked up their dice and started rolling. When a player at one of the non-idiot (and possibly non-CoC playing) tables protested that “we didn’t say it,” the response was “I don’t care. I heard it.” A definite break from the bubble of “we’re in an isolated universe over here.”

*For those unfamiliar with CoC, saying his name thrice stands a good chance of summoning the elder god. This is not good.

I know it’s not a popular opinion re: EotE, but that game needs any creative help it can muster.

Sounds like an amazing session though! No doubt my salt is born if jealousy.

I know it’s not a popular opinion re: EotE, but that game needs any creative help it can muster.

It’s definitely a system that leaves considerable gray area for the GM to play around in; I’ve been lucky to have really good people running games who bring a lot of flavor and fun to it. I can see how a lackluster or by-the-book GM would make for a very dry game.

I ran the system for a decently long campaign and there’s a few things I know about it: the basic specialization mechanics are below par and horribly unbalanced, I wrestled the dice much more than used them as intended, the meta currency for players is too easy to game, stats are incredibly unbalanced, managing strain is generally really unfun as a GM, they didn’t even try with force powers, starship combat doesn’t work, and the expanded powers for classes in supplements (while fun) suffer like force powers. I also dislike FFG continually convoluting (and introducing expensive gimmicks) mechanics from other games as their core RPG mechanics, it’s a running theme with them as a company. EotE is clearly inspired by PbtA games but removed a lot of the GM’s power in put it into the randomization pool.

There’s a lot of good too - the game has the best items of any game I have ever played. Shopping, crafting, etc. was never more fun. And that’s a big benefit. The other thing that was great are the social classes having a weight and power that works extremely well. And as much as I didn’t like the mechanics of the dice, it did introduce some extremely memorable scenes and the dice gave our campaign an extremely satisfying conclusion despite my players forgetting the many sessions before the last few that the dice results made a simple exploration of an industrial area a slow and extremely dangerous grind.

Like, the propogandist droid accidentally started order 66 and then the group retreating from the clone troopers was saved by the same robot getting tricking the soldiers into the starport and ejecting them into space with himself. The Jedi picked him up when he was saved by a wookie engineer that abandoned the group earlier, and while the droid worked underground with the empire’s rule the Jedi, wookie, and the Jedi’s secret Twi’lek lover escaped to the outer rim and got notification from the few remaining Jedi that all is lost and to live their lives in harmony with the Force. So it ended with half-Twi’lek children in a hidden corner of the galaxy with a happy but simple life as they received word about the events of the OT. Without the dice mechanic this ended wouldn’t have happened… but like I said, the dice made a whole section of the campaign a horrible grind.

My friends and I spent more hours than I would like to think about playing what we ended up calling Dude, Where’s My Dude? (We may have been a little worse for wear when this name came into being…)

Put simply, play Silent Cartographer (level 5 of Halo 1) in co-op until you get the second warthog. Drive round the beach to the start point where another warthog and about 10 Marines are waiting. Player 2 grabs the other warthog, each player picks up a full vehicle load of Marines each and then you joust at each other down the beach, trying to flip the other person’s warthog and run over their passengers when they fall out. Last person with a Marine left standing wins.

The physics are floaty but controllable enough that there is a remarkable amount of skill involved. If you get flipped, do you try to run obstruction and hopefully flip the other player, or do you desperately try to pick up one of your passengers before they all get smooched? Do you pick up speed on the approach and try to get under them as they crest a hill, or do you handbrake turn into them and try to deflect the force of the impact of their conical, scooped nose?

Halo 1 had lots of opportunities for player-generated minigames and such. Before Halo 3: ODST finally gave us Firefight, where you could just park yourself and shoot at endless waves of aliens to your trigger-happy heart’s content, you could do the same thing near a certain arrangement of Marines you were supposed to rescue (before the Pelican dropship arrives, toward the end of the “Halo” level). It took a bit of doing to avoid triggering the Pelican’s arrival that ended the mission, but it was loads of fun.

There was also grenade-launching Warthogs full of Marines for distance and accuracy, too. It was so fun to play Halo wrong!

I can’t speak to the game from a GM perspective, so I’ll defer to you about the hassles of dealing with the dice and strain. As a player it seemed like things flowed quite well and the dice seemed to have a nice balance of decision making and giving the GM options rather than dictate results. But there’s two things I do want to comment on…

they didn’t even try with force powers

True, but EotE was meant to specifically be a game without force powers. The whole point of the system was to be a Star Wars RPG that focused entirely on non-Force users. But they most definitely put a lot of effort into fleshing them out in Force & Destiny. Jedi tend to overpower a group, so splitting things up into different systems for different kinds of games was an interesting choice.

This is quite true. Even the dude from FFG that GM’d our GenCon session admitted that when he runs games with starship combat, he does what a lot of GMs do and just uses the X-Wing starship combat rules instead, since they’re much better written and much more fun. That’s what we do at home and it works pretty well.