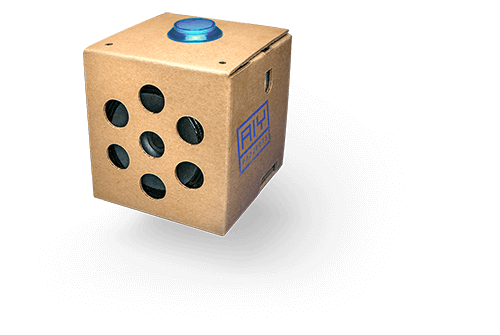 I tried to get a copy of the latest MagPi to get one of these today, but they were all sold out.

I’m sure I could, but probably not at that price.

I know the MagPi issues with the Pi Zero took a few weeks to filter out to stores in the U.S. I’ll have to keep my eyes open, this does look like an interesting one to tinker with.

I ended up picking up one of these… I wasn’t able to find one of the MagPi issues, but Microcenter is currently selling these for $25 by itself, or for free with the purchase a Raspberry Pi 3 for $35.

It’s a nicely-boxed kit, and comes with a full-color book from MagPi that walks through the build and setup. It may be a few days before I have any chance to get it put together and test it out.

Anyone else get one and have any tips on good things to do with it?

I also ordered one. I just need to pick it up from Microcenter.

I just need to pick it up from Microcenter.

You and everybody else, apparently. There was a 3- or 4-shelf wire rack at my local place today that had every shelf piled with RasPi boxes with names attached, easily 30+ per shelf. And mine wasn’t even in those piles, the person helping me finally found it in a back room instead!

I got it put together last night, and set up the minimal software today. The guide does a complete walkthrough for getting the basic Google assistant working on it, which is nice.

My only problem would be that there are multiple steps involved (different web pages to go to, logins to do, filling out form fields), and keeping the booklet open while doing it all without putting creases in the book is really difficult.

Yes, I am sometimes overly gentle on books, even product manuals. If you flatten one of my books open I will CUT you. Though, maybe just a paper cut.

Surely that damages the paper?

I opened the box and flipped through the book last night, but Wolfenstein II is too much of a pull right now for me to get any further into this.

Surely that damages the paper?

I don’t mind damaging a bit of paper, so long as it’s not a page from a book of mine.

It seems like all the demo code assumes that if you’re going to use your own commands, you won’t be using the Google Assistant for them (and, therefore, not using the voice activation with the “Ok Google” phrase). But, after some poking around, I did figure out a way to add local commands into the default Google Assistant demo (I added a “shut down” command that powers off the RasPi! Yay!). I’m not sure I’m doing it the “right” way, but it works! It took me a while because a) I’m really rusty on Python, and b) in spite of a fair amount of example and step-by-step demo code, the actual documentation seems a little slim.

Allow me to refresh you:

I wrote 20 short programs in Python yesterday. It was wonderful. Perl, I'm leaving you.

So… poking around online a bit in spare time, I saw some talk about scripts I didn’t have. Turns out, there have been updates… and one of them added a new script that does exactly what I’d worked out. *facepalm*

On the bright side, it looks like my additions to the original assistant script matched pretty well with what’s in the new script. So I still know how to code, even if it’s in a language I don’t usually use.

Just to save you time, @LockeCJ, if you’ll be following the book’s instructions then I suggest once you have it connected to the network:

that looks like it upgrades a few API files, and adds the file “src/assistant_library_with_local_commands_demo.py” which is basically the google assistant with three commands added (“power off”, “reboot”, and “ip address” which speaks the configured IP).

It also downloads a systemd file that references /home/pi/voice-recognizer-raspi, which I don’t have, so I may be missing out on something else. [edit: it seems that this is just the directory where the project github recommends checking the project out to. So I’m not missing anything. I don’t know why they would create confusion by using a different directory in the official image from the one recommended in the github, but there it is.]