Get your game on! Culture

@Wanderfound You know anyone who can do it?

Currently on hold due to the recent exodus of players (disappearing entirely from the BBS rather than specifically dropping out of the game) from the other place. If we can get some replacement players, I’d be happy to restart it and relocate it here. Ranar (@DaakSyde) and Thwip (@William_George) are here already; Hawk, Jibril and de Courcy have vanished. New players could take over one of the those three, or create a new chara…

This is the narrative thread for the game discussed at: …which is a continuation of the game started at: This thread is for in-character posts by the players and GM only; please keep all meta discussion to the other thread. Current party members: Thwip, a goblin steampunk engineer Ranar, a dwarven warrior Sasha, a dwarven geomancer Hayu, a human street tough

Hayu, (aka You-there! Smartarse, Likely Suspect, and ‘That prisoner over there’) grew up (somehow) in the back streets, brothels and taverns in Caridel. She’s left for a while, due to a misunderstanding with local law enforcement. She’s anywhere between the age of 18-22 and isn’t sure, herself due to the fact that there is no record of her birth. She spent her formative years (from about 2 or 3 years of age) in a Catholic orphanage run by Jesuits, but left when she was around 11, both parties agreeing that the other “asked too many annoying questions.” She can do large sums in her head, which has served her well in thievery, fencing (of stolen goods, not sword-work. She barely knows which end of a sword to hold and which to stick into people), and working as an alchemist’s assistant. Other than “probably human”, her ancestral background is a mystery. She has a weakness for fine art and is literate, even though she’s a) female and b) not rich, because c) it seemed like it could be a useful skill to have.

Cool. Thief with a touch of street martial artist, plus a hint of alchemical knowledge. I’ll work up a draft character this afternoon.

Let me know what you’d like changed or explained, keeping in mind that any points added to an ability will need to be taken from somewhere else. At the moment she’s a bit jack-of-all-trades; competent at all of her wide-ranging skills, but not spectacularly good at any one thing. Her lockpicking/trap-defusing skills are fairly low, but the party already has Thwip (goblin engineer) for that.

She’d clean up in a lightly-armed streetfight against a humanoid opponent, but would struggle in a genuine military or monster situation. Brass knuckles ain’t ideal against armour or trolls. It’d be worthwhile thinking how to deal with that; perhaps some archery skill, or load up on explosive potions or somesuch.

Her alchemy skill at the moment is enough to be useful in identifying potions, but is a bit low for safely/economically making them.

The party is currently on a dungeonbash [1], but they’ll likely be heading back towards urban intrigue fairly soon.

[1] They’ve finished off all of the apparent monsters, but are currently trapped by a flooded entrance and are threatened by a group of baddies on the surface.

Looks mostly good – I would like to add a few things to her gear. Some small bags of spices, for example. And while she isn’t good enough at alchemy to whip up something like a healing potion, I’d like for her to know enough to know that if you mix "x’ with “y” (I am too tired at the moment to look up any actual chemistry, let alone something like the discovery and isolation of chlorine and ammonia) you get eyewateringly bad fumes (so a couple of bottles of x and a couple of y wrapped up carefully)

.[quote=“Wanderfound, post:5, topic:601”]
She’d clean up in a lightly-armed streetfight against a humanoid opponent, but would struggle in a genuine military or monster situation
[/quote]

That’s pretty much how I imagined her. I probably will grab some explosive potions, and/or things that can be lit on fire (such as some vials of lamp oil) and flint+striker. (Oooh. Molotovs.). She’s not a “charge in and attack” fighter – that’s never a good idea when it’s you versus a patrol of the city guard. But in a tavern brawl or a riot, she knows how to take care of herself. I’d rather not go with the archery right now and stick with the chemical weapons (pepper bombs and mustard-gas equivalents) and incendiaries, if possible.

It’s a somewhat realistic low-tech fantasy world, so there are two options:

“Chemistry” is the realistic skill, “alchemy” is the magic potion skill. At the moment, Hayu has both, but at minimal-competence level.

Have a scan through the skill list; anything you find that you think she shouldn’t have gives me points to apply elsewhere.

Hmmm… Like I said, she barely knows one end of a sword from another, so unless shortsword is a stand-in for something else, I can probably sacrifice that and one of the “acting” points.

And when I say “chemical weapons” I really am talking the “take the two things Hassan told me never to mix together and mix them together. And try not to breathe.” type, nothing fancy. Basic distillation knowledge (for a stronger acid, say), that sort of thing. Nothing complicated like timed explosives or healing potions. Molotovs are basic – she’d be buying lamp oil and rags are cheap. I guess less grenades and more breakables with damaging and/or flammable liquid inside.

Acting is the skill you use to defeat someone else’s “Detect Lies” skill. Acting AKA “lying skill”.

Sure you want to reduce it? It seemed in character.

Okay, I will look again… It just happened to be one of the ones with more than one point.

It’s fine to shave it if you want to, I just wanted to be clear about why the skill was there. No theatrical background involved.

So what’s the plan? Are we gonna try to get to the end of the Vault?

Or are we going to start fresh with Thwip and Ranar sitting in a pub going, “My what a shocking end to our adventure.” “Yes. If the day comes I shall write down what happened. But for now words escape me.”

By shaving the points spent on Talents (advantages that boost a range of thematically-linked skills) I managed to raise her DX a point (which itself boosts all physical skills, and helps with avoiding getting hit). Dropped some of the less useful street skills (panhandling etc), gave her the ability to accurately throw anything (rather than just knives). Also added some poison-handling skill.

Smokebombs, lime powder and molotov cocktails are all now in the equipment list.

I really like this second iteration. I can live without the extra tough-guy advantages.

Sorry it took a bit to reply, but I wanted to look at it on the computer instead of the phone. 35 degree heat, small screens and migraines do not mix well.

Looking forward to playing. It’s been a while since I last played GURPS, but I have enjoyed it every time I did.

I’m happy with (2), or anything that gets it going again. 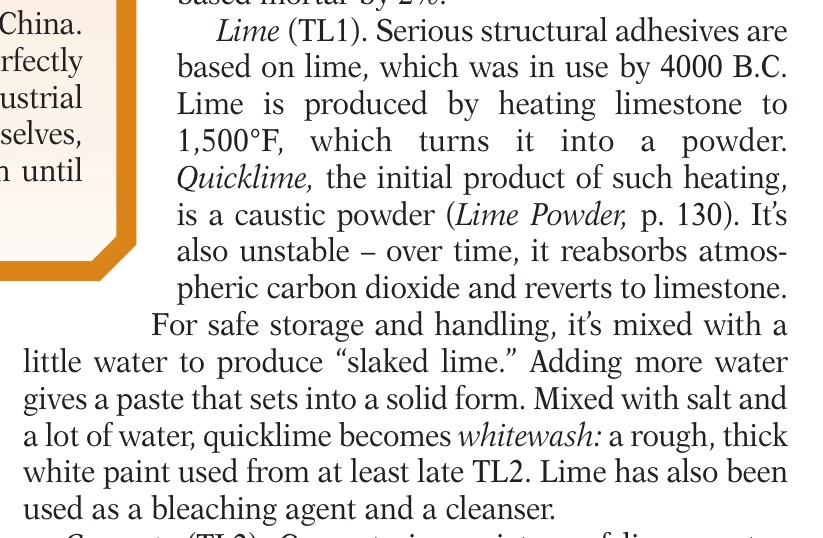 While lime is nasty if you get it in someone’s eyes, it’s fairly difficult to do that in practice. Respiratory agent = make them breathe it, blood agent = get it in their eyes or mouth.

To really boost her combat effectiveness, you want some magical grenades.

nods Quicklime is Calcium oxide, slaked is hydroxide and chalk is carbonate. I’ve done enough cement-mixing to know the first two are nasty, but carbonate is used as a vitamin. Just wanted to see if I had the “extreme pain in mucus membranes” version or the “cloud of dust but otherwise harmless” one. It makes a difference insofar as tactics, especially if there’s a breeze.

Ranar Bolijyr “I canna see outrunnin’ gallopin’ centaurs in the open. Here at least, we have confined spaces.” His tone conveys the natural dwarven love for tight underground spaces as he gestures at the walls. “Gives us an an ahh… the advantage. Maybe someone tricksy enough could make it more of an advantage - set up some traps along the corridors. We’ve got some rope, I think there was a crossbow in the weapons pile, maybe some knives… Improvise. Then we lure 'em in, through the traps,…

So where did you want to set the ambush? At the top of the entrance stairs, or somewhere else? Who is where, is the spider involved, what are you doing for lighting, etc. 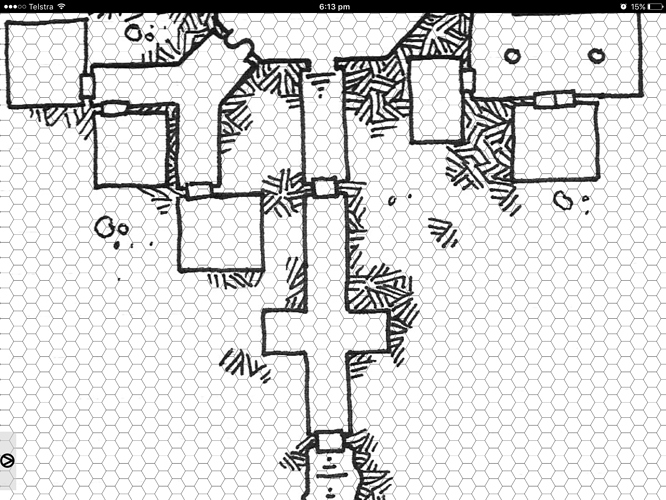 The opposition will likely notice as soon as the water is removed. The area between the stairways is flooded until then.

Thwip is going to try and pinpoint the locations of all of them. No point in running into an ambush over the next hill no matter what we decide to do.