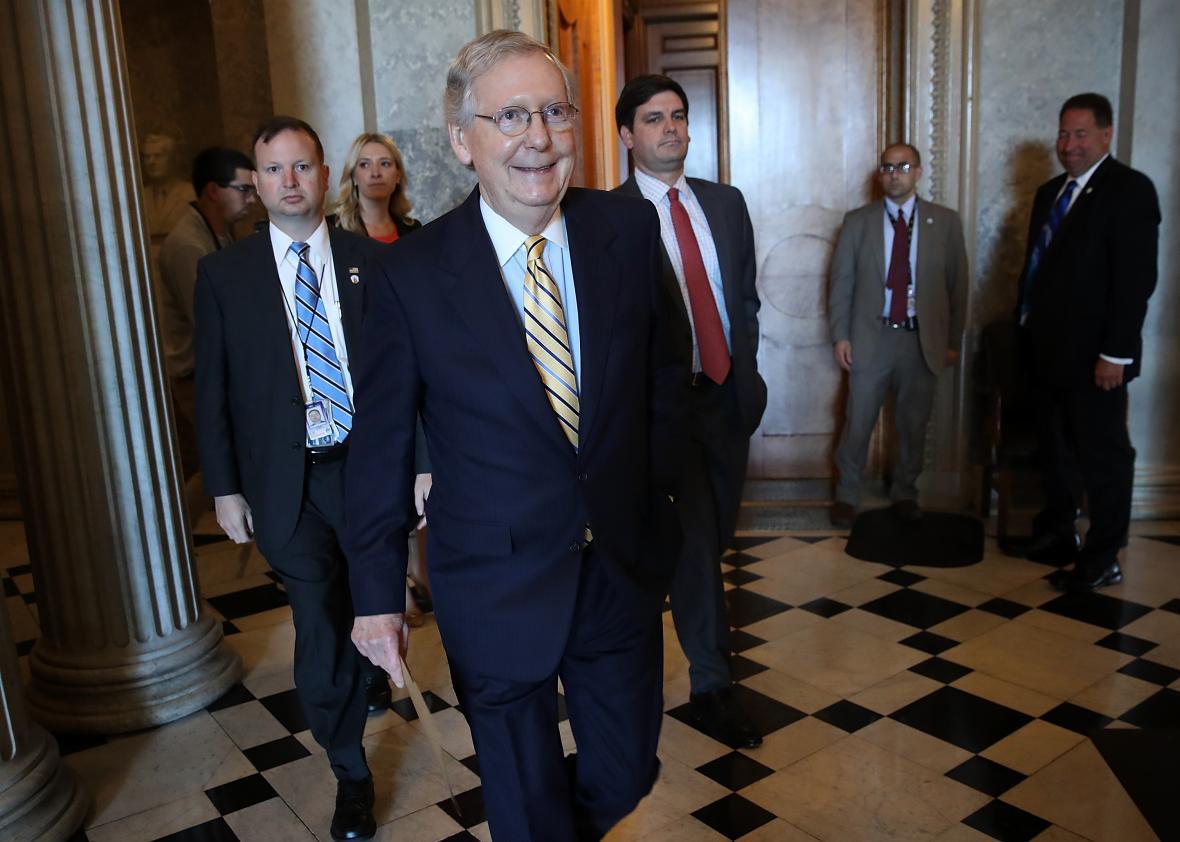 This is getting pathetic ... and even more dangerous.

[quote]
Here is how the four-step “skinny repeal” plan would work, as outlined by NBC’s Leigh Ann Caldwell:

As a piece of health care policy, the “skinny repeal” bill is a travesty. To repeat what health care writers have written at least a gazillion times now, repealing the individual mandate while leaving the rest of Obamacare unchanged would likely push the individual insurance markets into a death spiral, as young and healthy Americans stopped buying insurance, leaving behind a customer pool full of older patients with extensive medical costs.

But the skinny bill does not appear to be a real policy compromise. Instead, it seems like a legislative tactic aimed at keeping Obamacare repeal alive by winning 50 votes, then kicking the legislation over to a conference committee, where Republicans in the House and Senate can hash out a final piece of legislation. Of course, if this truncated, nonsensical bill is the only thing upper-chamber Republicans can pass now, it’s unclear why anybody thinks they’d be able to strike a workable bargain with the more conservative House—other than the possibility that lawmakers will feel they’re too deep in at that point to turn back.[/quote]

So far I’ve seen no information on how senators are likely to vote on the skinny repeal.

Right now my only thought is fuck this country, fuck the TGOP and fuck 45 with a rusty, barb wired fence post.

Opinion | How the Health Bill Could Cost Senators in the Next Election...

Republicans could eliminate coverage for millions of their own constituents, creating a cohort of uninsured voters in the next election.

If they pass the bill, some Republicans might put themselves in a difficult situation because many of them won their last election by fewer votes than the number of people who would lose health coverage in their state under the proposed legislation.

Of course, not everyone who faces a tougher insurance market will be swayed to vote against incumbent Republican senators who backed the bill, if only because voters won’t see the effects immediately. Under the repeal without replacement bill, Obamacare’s expanded Medicaid coverage would end in 2020, after the 2018 midterm election. Under the other Senate bill under consideration, the Better Care Reconciliation Act, big cuts to Medicaid would start in 2021, the year after the next presidential election.

Still, many voters might be worried about the prospect of losing coverage, or entering an insurance market that no longer has the protections of the Affordable Care Act, as they cast their votes next year and in 2020.

It pisses me off that we live in a country where people will gleefully sacrifice hundreds of thousands of lives in exchange for shallow promises of somewhat lower premiums. That having been said, I’m inclined to view anything the Republicans do as a temporary setback, the long road to single-payer being tread with two steps forward for each step back. At the end of the day, people like having healthcare more than they like having it taken away from them.

It puts me in mind of a Woody Guthrie song. We’ll get there, but in the mean time, it’s going to suck badly for a whole bunch of people.

I’ve thought about getting one of those “This Machine Kills Fascists” stickers for my car. 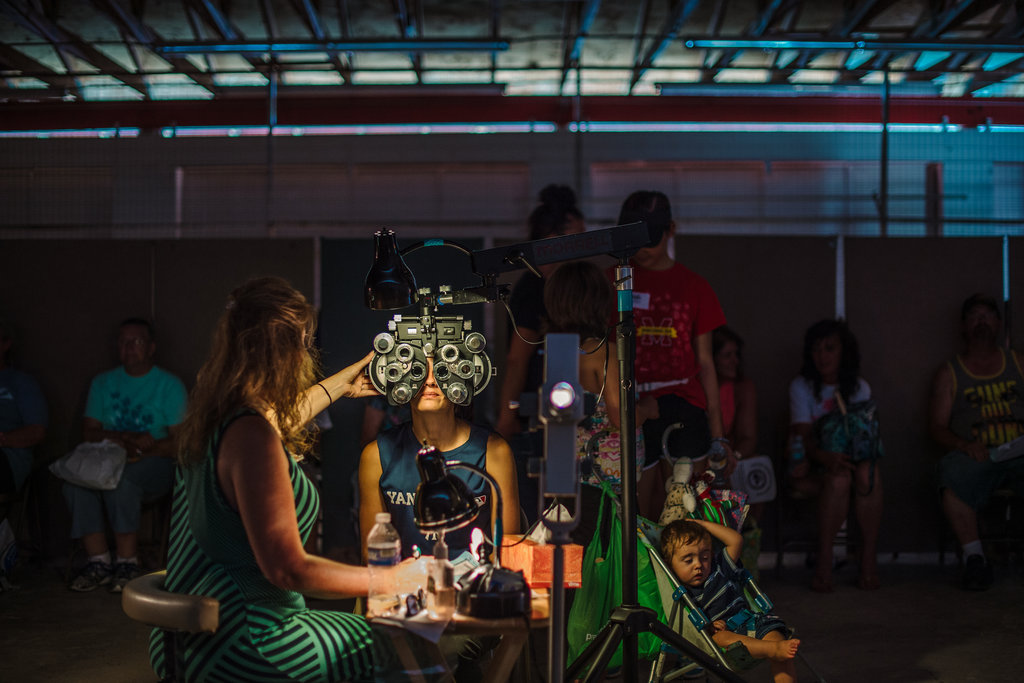 When Health Law Isn’t Enough, the Desperate Line Up at Tents (Published 2017)

The Remote Area Medical Expedition drew more than 2,000 people when it set up its free clinic at a county fairground in Appalachia.

That looks like a good thing to donate to right now.

Part of the reason they’re holding these votes is to gauge actual support going forward. In that context, this is significant:

The Tuesday night tally needed to reach 60 votes to overcome a parliamentary objection. Instead, it fell 43-57. The fact that the comprehensive replacement plan came up well short of even 50 votes was an ominous sign for Republican leaders still seeking a formula to pass final health care legislation this week.

Not sure I accept this line of reasoning, but this is the first comment I’ve seen on whether the skinny repeal is likely to pass.

[quote]The reason is simple. Even with the mandate currently in place, there haven’t been enough younger and healthier people signing up for coverage. The Congressional Budget Office and lots of other supposed experts were way off the mark when they estimated how many people would sign up for insurance to avoid the penalties for not doing so. Without a robust stream of premium revenues from younger people who are less likely to need expensive care, many insurers have exited the least profitable ACA exchanges. This is what some call the “Obamacare death spiral.”

The skinny bill would accelerate this scenario in a big way. If the penalties and requirements for health insurance coverage haven’t coerced the expected number of people to buy insurance, just imagine how quickly those coverage levels will drop without them. More and more insurers would bolt the exchanges in that scenario as they wouldn’t want to wait around to lose money when enrollment numbers fall. And those who think there are 50 or more GOP senators who will allow that to happen are kidding themselves.

Because a closer look at the map of states where the Obamacare exchanges are already without multiple insurer options is decidedly Republican-dominated. It’s filled with red states like Alaska, South Carolina, Wyoming, Arizona, Mississippi, Alabama, and Oklahoma. Not all the GOP senators in those states will resist ending the mandate, but Arizona’s Senator John McCain said Tuesday he wasn’t ready to vote for any replacement bill and his state’s dwindling insurance options could be why. Without McCain alone, the “skinny bill” is doomed, and don’t be surprised if a few other Republicans like Alaska Senator Lisa Murkowski vote against it too.[/quote]

Heller has said that “we’ll see at the end of the day what’s in it, but overall I think I’d support it.”

As it now appears, the “no caucus” consists of Heller, Collins and Murkowski, who voted against both bills. They were joined by Alexander, Capito, McCain and Portman, who voted to repeal and replace, but opposed the partial repeal. So, of the seven who voted against repeal without a replacement, how many can be persuaded to support the skinny repeal? 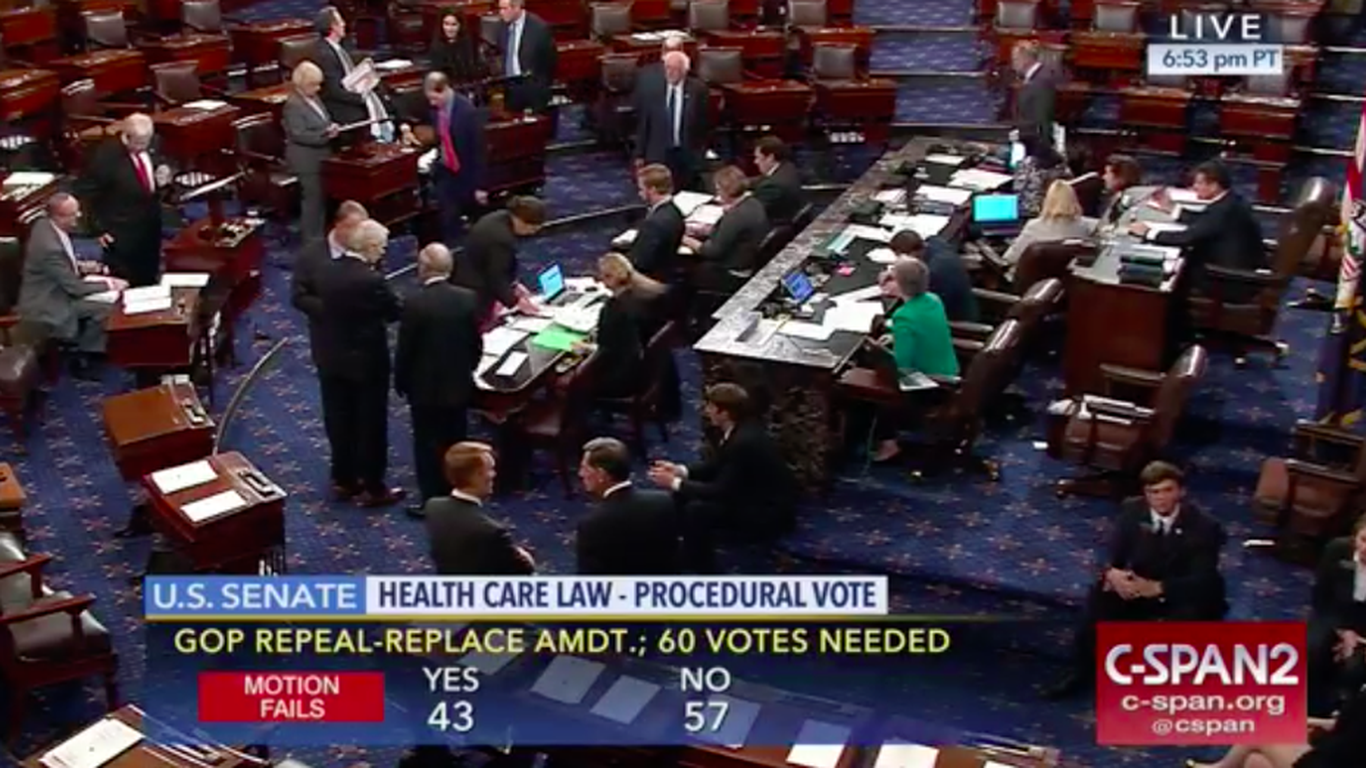 The first vote was on the Senate GOP replacement bill, which failed with nine Republicans defecting.

We’ll get there, but in the mean time, it’s going to suck badly for a whole bunch of people.

Senator Struggling To Weigh Interests Of Entire Constituency Against Nothing

WASHINGTON—As legislators gathered Tuesday for a critical vote that would go a long way toward finally repealing and replacing the Affordable Care Act, Senator Shelley Moore Capito (R-WV) was reportedly struggling to weigh the interests of her entire... Republicans are working their way through a list of demands in order to secure enough votes to pass a pared-down version of an Obamacare repeal bill.

“Not only do we not replace Obamacare, we politically own the collapse of health care,” Graham added. “I would rather get out of the way and let it collapse than have a half-ass approach where it is now our problem. So we are not going to do that with our vote.”

“Instead, we’re going to sit idly by and watch our constituents die pointless deaths, secure in the knowledge that our political asses are covered. Also, we’re going to casually announce this in a press conference, as though it weren’t an egregious breach of the social contract.”

I’m so glad I watched the vote live. The Democrats gave amazing, impassioned speeches about bipartisanship and the special interests that had crafted the bill; a single Republican then droned on for an hour, running down the clock. Because the Republicans were projecting so much confidence, Internet pundits felt pretty sure that the vote would pass, but McCain had never actually committed. In fact, Graham had earlier made some remark like “whatever he does, he earned it,” which didn’t sound like a “yes” vote to me.

So, when it came time for the vote, the Republicans realized that they didn’t have enough, and what followed was about an hour of people watching the live stream and reading into the senators’ body language. You could see them gather around McCain and Murkowski, McCain finally waving Pence off, who left the chamber.

McConnell gave a sad boy concession speech and challenged the Democrats to propose their own ideas, then scheduled non-healthcare business for Friday. Schumer appears to have then invited the Republicans to put some nominations forward, and apparently approved them a token of good will, or possibly as his end of a bargain.

Having compulsively refreshed through the two Georgia special elections, it was nice to be rewarded for once.

You probably know, but fascism was incredibly popular in Canada and America right up until the point Hitler made it unfashionable. I don’t think that boner knee-high boots and well-pressed shirts ever really left us. 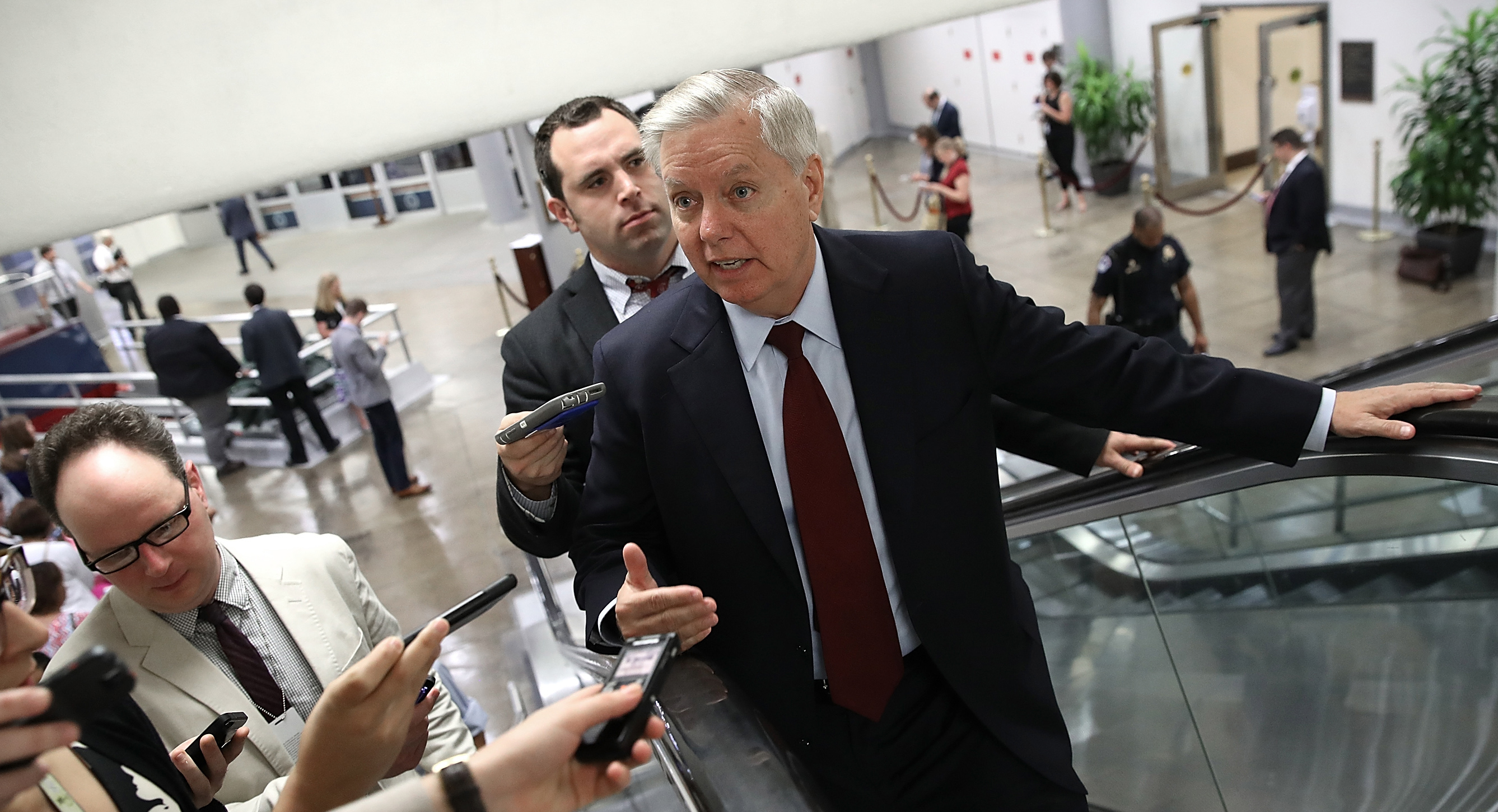 Some congressional Republicans are backing a proposal by Sen. Lindsey Graham they hope can get 50 Republican votes.

Maybe they should just outlaw disease.

Some congressional Republicans are backing a proposal by Sen. Lindsey Graham they hope can get 50 Republican votes.

My baseline anxiety dropped like 50% after the skinny bill failed. Now I kind of wish that I had quit while I was ahead just stayed off the net. That having been said, anything the Republicans pass at this point is likely to be minor, reversible, and amount to an assumption of ownership over the healthcare crisis.

Trump also appeared to take a personal shot at lawmakers, seemingly warning that he could revoke their own health benefits on the exchanges.

“If a new HealthCare Bill is not approved quickly, BAILOUTS for Insurance Companies and BAILOUTS for Members of Congress will end very soon!” Trump tweeted Saturday afternoon.[/quote]

…and nuke Alaska while he’s at it.

Honestly I can’t think of a more likely way for Trump to go down in flames than for him to start deliberately punishing the American public when he doesn’t get his way. Given his mental state and how things are going, it’s all too easy to envision a series of tantrums that result in the word “traitor” entering the public discourse.