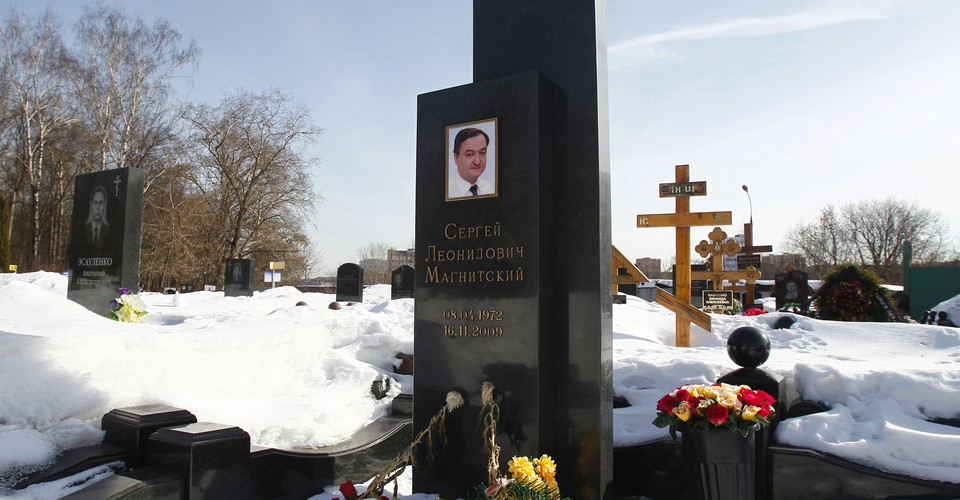 “I hope that my story will help you understand the methods of Russian operatives in Washington and how they use U.S. enablers to achieve major foreign policy goals without disclosing those interests,” Browder writes.

If even half of this is true… everyone in the Administration with any links to those criminals should be arrested. Or deported.

cause the media has decided to roll over is my best guess.

My guess is because it’s considered “old news”, what with the health care repeal thing and the transgender people in the military thing. Also the $1.6B approved for the Mexican wall thing.

Meanwhile, there are still people who believe all the Russia stuff is not true, doesn’t exist.

My guess is because it’s considered “old news”

That’s possible. I’d heard vaguely about the Magnitsky Act but I didn’t really know all the details. To read about its background in such detail is absolutely chilling.

Pretty sure this is why Annoying Orange went to talk at the Scouts and distract us.

All of the people some of the time, after all.

I think that everything he does is to distract us, at least anymore. He’s in panic mode.

Honestly not sure he has any other mode. Seems more and more like he’s lived his entire life putting out one fire after the next without ever really looking down the road.

Agreed, except he does look far enough to decide where his ambitions will take him. He got as far as “I’ll be President!”, but not “once I’m president…”.

For some people, this is their first full blown Narcissist. I grew up among such personalities and their variations (and escaped, until this). It’s all Panic Mode. If you’re not reacting to them, they will be reacting to you.

That’s possible. I’d heard vaguely about the Magnitsky Act but I didn’t really know all the details. To read about its background in such detail is absolutely chilling.

To get perspective you need to read quite a lot about the history of the Yeltsin era and the Putin era. Browder was in Moscow during the Yeltsin years and to me that means his evidence is inevitably as tainted as that of any of the Russian oligarchs or the American businessmen of that era. “Businessman” to a Russian rings similarly to “Al Capone” to an American.

There seems to be no doubt from his testimony that either he fell out with Putin or vice versa (inclusive or there). Putin was actually very poor by oligarch standards when he became President and it would be astonishing if he didn’t enrich himself to the degree that when he leaves politics he’s going to need an awful lot of protection because some very rich and very angry men will want him dead, and not too quickly either. Beyond that I suspect Browder of exaggeration given he’s telling them what they want to hear.

That’s why I don’t think it is - yet - that big a story. Independent corroboration from people who may not have bodies buried from 1995-2000 would transform the picture.

Note that I am not saying he’s wrong, just that he doesn’t sound like a very reliable witness. Businessmen generally are not, says my commercial lawyer friend. And of course in Russia ne pravda v’Izvestiye i ne izvestiya v’Pravde - there is no truth in “The News” and no news in “The Truth”. Though increasingly Anglophone western media doesn’t seem to be a lot better.

At this point if things are not to get a lot worse we somehow need to find out who knows, and is speaking, the truth. And it seems to be getting harder, not easier. Which is uncomfortably reminiscent of the period of lies and confusion before WW1.

Agreed, except he does look far enough to decide where his ambitions will take him. He got as far as “I’ll be President!”, but not “once I’m president…”.

This seems to be a thing with some Presidents. “I’ll invade Iraq and get rid of Saddam” but with no “then”. “I’ll get the Russians out of Afghanistan by arming Islamic fundamentalists”, also with no “then”.
Once of course politicians didn’t look beyond the next electoral cycle. Now they don’t seem to look past the next tweet.

Complete failure of long term thinking. It’s the scourge of our time, and may yet be our demise.

That seems to me to be why it’s not getting as much airtime as it probably should. If you’ve been paying attention for the last decade or so (as I imagine most journalists with Russia knowledge would have been) nothing in his testimony is really new.

It’s certainly good that this is on the record but I imagine the response from the journalists in question has largely been “yeh, we knew this already; give us some Breaking News to sink our teeth into.”

There is also of course the problem that in both the US and Russia (sticking to places where people have votes rather than straight up dictatorships like those of the ME) if you report that some very rich guy has had an interesting way of acquiring the money, you may just find that his approval rating goes up. Because so many people out there would do exactly the same if they could.

means his evidence is inevitably as tainted

I don’t think anybody in a position to actually inform us as to what the hell is going on, actually has clean hands. That doesn’t mean that the search for truth is meaningless. We’ve got to start somewhere.

That doesn’t mean that the search for truth is meaningless. We’ve got to start somewhere.

I would never disagree with that. But in this case we can’t test the truth, as it were. We’re just dealing with competing sides shouting at one another.
I would have thought that somewhere there were serious economists analysing, as best as they can, money flows around the world. If anyone has a lead on that I would love to see it because it would be more convincing than “somebody told me that…” Especially now when, largely as a result of the Obama hate and lying when his election campaign started, we have good cause to assign an even lower probability to anything Republicans say than even the low political average. We won’t get clean hands, but I am sure we can find cleaner ones than the ones that are making most of the running at the moment.
For instance, it’s convenient that just as Saudi runs into financial trouble due to its reckless arms spending and the low oil price, its friends find reasons to oppose Iran and Russia who are major oil and gas suppliers, and a campaign starts against Qatar. At the same time the British government refuses to release the results on an enquiry into terrorism funding, and people are saying that it’s because it fingers the Saudis. The fact is that US oil interests did try to gain control of Russian oil and gas - and it’s since that was stopped that many of the accusations started.
That could all be true and the Russian government could be a kleptarchy - they aren’t inconsistent.