Is there a way to block horrifying pictures

Is there a way

(a) for posters to post links which may contain horrifying pictures, without posting the pictures themselves to the discussion, and

(b) for users to block horrifying pictures, depending on our ptsd and/or panic attack and/or phobia triggers?

Of course, people have different triggers, so there’s no one-size-fits-all solution.

Is there a way

(a) for posters to post links which may contain horrifying pictures, without posting the pictures themselves to the discussion

Images can also be put inside spoiler tags. They show up blurred, until the viewer decides to click on them to reveal them.

(This is a picture of a smiling cat wrapped in a blanket, just because I feel like posting cute happy things right now.) 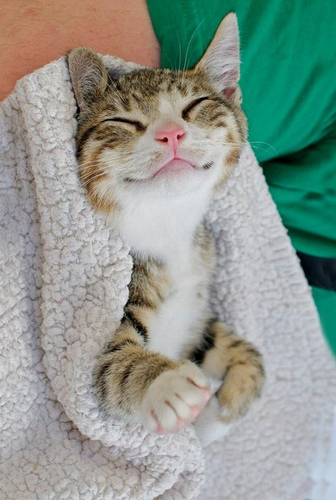 Edited to add: to add spoiler tags, click on the gear symbol on the post window toolbar. Select Blur Spoiler from the drop down menu. You can type, paste or upload whatever you like, between the beginning and ending spoiler brackets.

This text will be blurred

Also, please don’t intentionally post horrifying images, or at least those that would get us in trouble with our e-mail provider (Sparkpost.)

Actually, blurring images by default would be a pretty solid plugin. It would be opt-in, of course, but the actual implementation would be very straightforward since most of the work has already been done with the spoiler tag plugin. It would just need to add a checkbox to the user preferences, and then logic that acts on that for every image.

I don’t think anybody’s doing it on purpose.

A oneboxed link to a news story could have a horrifying image today.

ADDENDUM: Also there’s @Wanderfound and his links about the CIA. Maybe the Wanderthread is not the best place for people with triggers.

Sorry about that. I’ll add a warning to the top post.

Actually, it appears that I can’t edit a post that old.

@moderators is it possible to unlock that?

Can you try making it a wiki? It looks like the time limit is 24 hours by default, and I would have to extend that significantly to put that post back into the window. I could set it to forever (0), but I’m not comfortable with the idea of allowing anyone to edit or delete their posts for that long.

If you’d rather not make it a wiki, you can PM me the text and I can edit the post on your behalf.

I’m not sure we’ve correctly identified the relevant parameter yet.

I’ll have to investigate further. Perhaps TL3 gets a larger window, just not one that extends all the way back to July.

I’m going to need to blur things by default.

Also, what counts as “horrifying”? Is this mostly just violent images, and pictures of blood and gore?

Whenever I’ve posted anything like this in the past, or anything NSFW (involving nudity) I’ve spoilered it and tagged it as NSFW.

Also, what counts as “horrifying”? Is this mostly just violent images, and pictures of blood and gore?

I was floored to see “food” listed as one of the topics that should be under a content warning, suggested by someone on a relatively permissive mastodon instance, to be applied to everyone outside that mastodon instance. I can understand blood and gore, criminal activity, autopsy photos, surgery and post-op pics, images triggering photosensitive epilepsy, and sensitive topics going under a content warning, but surely most people have eaten, digested and excreted most meals without being psychologically scarred for life.

I may hide a lengthy preparation for a recipe under a content warning as the CW serves nicely as a hiding summary, but if someone has an issue with “eggocados”, that’s not a topic 95% of us need to tiptoe around

It varies from person to person.

I discuss some of my fears and triggers here; tw C. familiaris.

It is probably most flexible, for the most users, to allow users to block all pictures, and unblock if and when we choose to check one picture.

I was floored to see “food” listed as one of the topics that should be under a content warning, suggested by someone on a relatively permissive mastodon instance, to be applied to everyone outside that mastodon instance.

Food topics can be difficult for anorexics to deal with. Still, this seems a little excessive. If someone says they have issues with an image and asks if we can blur it, we should, but this doesn’t mean food has to be under a content warning everywhere from now on.

Also, on other social media, people go crazy posting pictures of their food. I can definitely see how this can be upsetting, not only for those with eating disorders, but because food is conflated both with health and with social status in these cases. Not everybody has figured out that Instagram is total bullshit.

Posting pictures of food in the food threads over here, obviously, is okay.

As in, violent crime, or just criminal activity in general? Violent crime photos are in the same category as blood and gore, so I agree with that. It’s a little irritating (to me) when people post pictures of their drug stashes, but I don’t care all that much.

I don’t have a “gear symbol.” I’ll try typing the brackets.

… I end up with a blurry link. 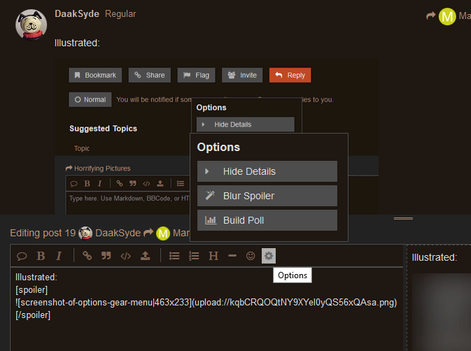 @LockeCJ and @tinoesroho are there browser side plug ins that accomplish this?

Doesn’t appear to be. It wouldn’t be difficult [1] for a webgeek to create one; insert a div over images via jquery and remove on click.

Not what you’re looking for, but very funny: