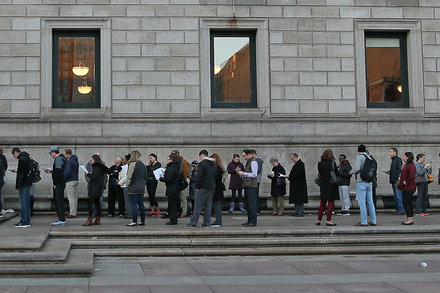 Opinion | Voting at Home Will Help Save Our Democracy

All 50 states should follow the example set by Oregon and Washington.

Along with the voters pamphlet we get sent in WA it is really nice. You can sit down and take your time and double check things before you fill in the ballot.

Also you get the fun of reading the position statements for all the loony candidates.

Along with the voters pamphlet

That’d be nice. I hate trying to find info on all the down ballot positions and especially the Judges.

I think that’s far too obvious and simple of a solution for people to accept it, even with proof that it works well both here and in other countries.

My state has absentee ballots, but you have to provide an excuse from among an unreasonably limited list. You’d need to fake a religion, disability, military service, or an employment obligation which would technically be voter fraud I guess.

I suppose I could possibly get by with it by claiming Daoism as a religion, since one of it’s tenets is to achieve results without unnecessary actions. Finding a polling place, walking down there, standing in line possibly for hours, are all unnecessary when in the end I could’ve checked the same boxes on the same piece of paper without doing any of that.

The argument against voting at home that I have heard is the situation when the “Head of Household” decides how the house is voting and pursuades everyone there to vote for their candidate/party/etc.

My mom tells a story about her mother and voting. It was the Nixon v Kennedy election, and my grandfather announced many times that he and his wife would vote for Nixon.

On election day, my grandmother told my mother that the good thing about the voting booth is that it’s private, and no one can know how you really voted. She didn’t actually say she voted opposite her husband, but the implication was clear to my mother.

Counterpoint is people standing in line at the polling booth asking each other who to vote for and/or people giving rides to the location and/or other gifts in exchange for a vote.