Last Call BBS - Available on July 5th! Boot up your Z5 Powerlance and dial into Last Call BBS, the last game from Zachtronics! The Barkeep’s loaded u...

Boot up your Z5 Powerlance and dial into Last Call BBS, the last game from Zachtronics! The Barkeep’s loaded up his retro computer with a full set of puzzle games for you to download and play. No need to worry about copy protection, they’re all fully cracked and ready to enjoy!

If you’re a fan of Zachtronics games and want a chance to get a deluxe edition, this is your final chance, since this is the final game from the studio.

They all came in a large white cardboard envelope, but it’s relatively nondescript, and I wasn’t sure what all I would need to obscure to avoid doxxing myself, so I won’t include a picture of that.
Here’s the invoice. There is in fact a yellow copy of the three-part(?) form. Maybe they kept the pink one… 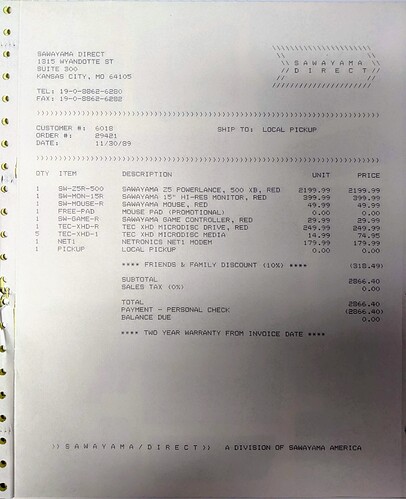 PXL_20220622_193342063(1)3023×3717 738 KB
The address appears to point to an empty lot in downtown KC. I haven’t a clue if there’s any significance there. It’s an odd coincidence, because it’s surprisingly close to the office building of my actual employer. I can’t imagine that the invoice is in any way tailored to the customer in this case, and I don’t see how they could know that detail anyway. I’m not sure if there’s any way to find out what was at that location in 1989, but that could be interesting.
The telephone and fax numbers are oddly formatted, but appear to be legitimate. I tried calling the first one and got what appeared to be a personal voice mail. The 908 area code is for northern New Jersey, and the voice on the outgoing message certainly fit that profile. I haven’t tried calling the fax number since I don’t want to bother anyone, and don’t have a fax machine anyway. The rest of the invoice is relatively unremarkable. It would be hard to determine if the prices on components for a fictional computer are accurate for the time, but they feel correct for me. If you’d like to feel the weight of inflation, the total ($2866.40) would be $6756.75 today. I like the detail of the Friends and Family discount, and also the multi-part tractor-fed dot-matrix printout with the guides still attached, and also ripped slightly. I don’t imagine that last detail is intentional, but it feels authentic nonetheless.

Next up is a sticker sheet: 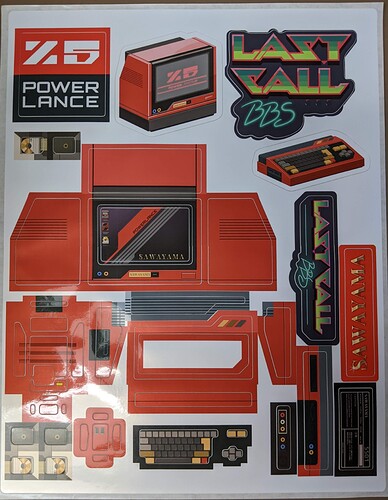 Similar to the deluxe version of Exa Punks, there’s an envelope that you’re supposed to open after a certain point is reached in the game. I assume Zachmatics is a play on Zachtronics. 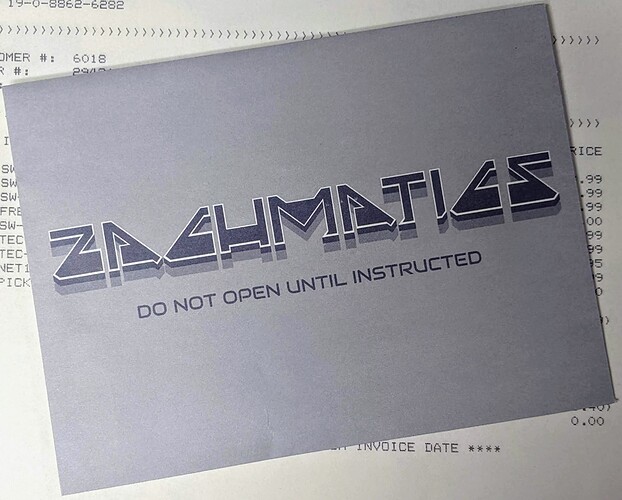 Next is a set of two pair of coasters like the kind you’d find at a quick casual restaurant, somewhere between cardboard and a sponge. One pair is for the BBS in the game, and features a phone number that I’m afraid to check if it’s real or not, and the fictional PC. I didn’t mention this earlier, but I was initially thinking of the Z5 Power Lance as being somewhat like an Amiga or an Atari ST, but I think it may be more influenced by one or more of the Japan exclusive(?) MSX PCs.
Here are the back sides of them: 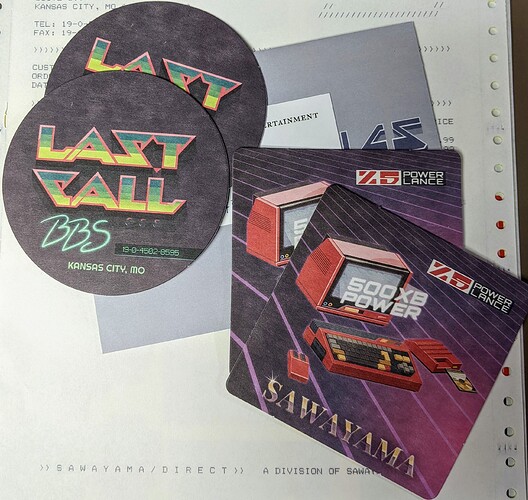 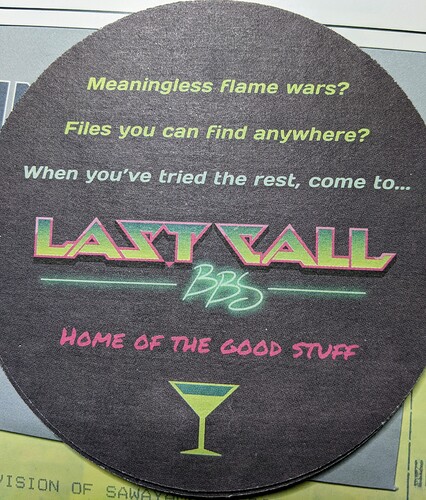 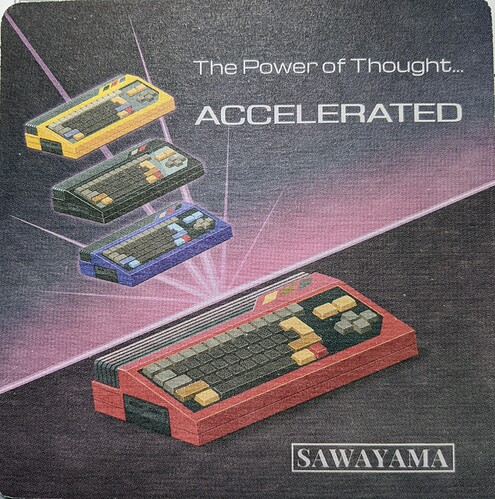 There’s this business card. Maybe it’s for one of the software companies that made one of the eight fictional(?) games within the game? 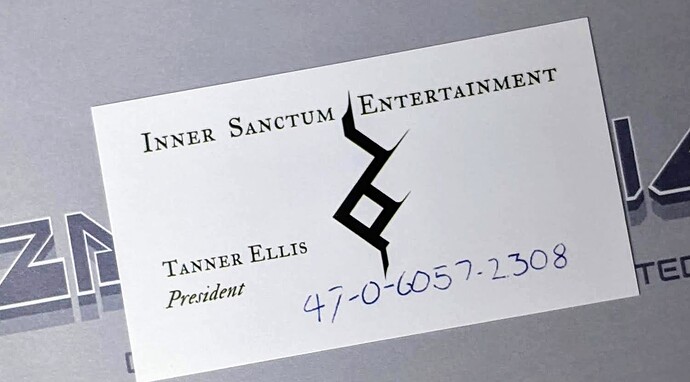 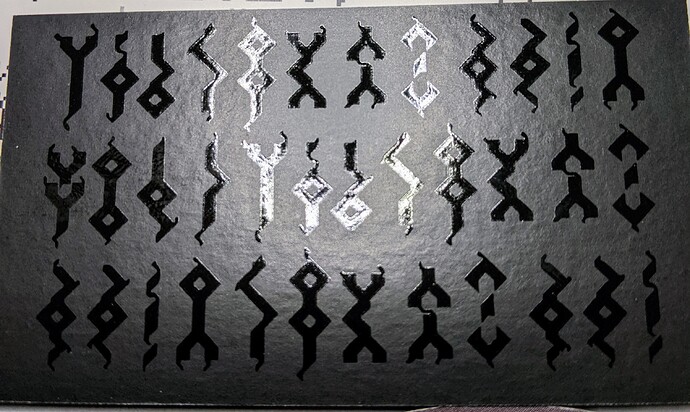 Finally, there’s what appear to be instructions or character sheets for the in-game Gunpla simulator. These seem exactly like the kind of thing that would be included with a subject like that. There are three different mechs mobile suits that are featured, but I don’t know whether that is the extent of the game or not. What I do know is that I already have a favorite among the three. 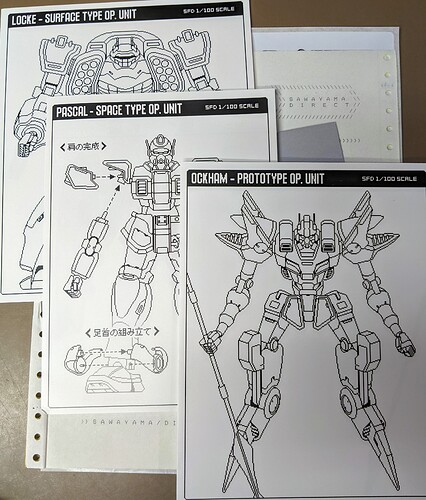 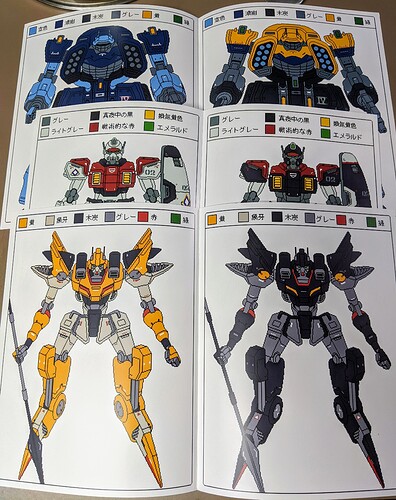 PXL_20220622_1935045663024×3812 1.63 MB
I ran the Japanese through Google translate, but there weren’t any surprises. The assembly instructions are pretty straightforward part names, and the full-color sections are just listing the color names. One nice detail I didn’t immediately notice is that each of the two variants are using the same palette. I’m sure if I were more artistically oriented, I would’ve noticed sooner.

I apologize if any of the above came off as a bit ad-like. The reality is that only 900 of these packages were made, and they’re already sold out. I also apologize if this had an air of conspicuous consumption. I just think that Zachtronics is a really cool game developer that has made many of my favorite games over the years, and I wanted to highlight how much care and thought went into this package. I’m genuinely sad that this is going to be the last game they create, with the founder, Zach Barth, seemingly leaving game development entirely. I hope that he is remembered more for creating weird and esoteric gems like this, rather than being the guy who created the game that inspired Minecraft.

I’ll try to follow up when I finally get to play the game on July 5th.

They no doubt kept the pink copy. How cool that it was in daisy-wheel!

That’s awesome! I miss when games came with cool stuff like that.

I think the last I got was Uplink (2001) which had some easter eggs in game but also something hidden in the print on the CD manual.

I went ahead and sprung for one as well - I’ve generally liked their games in the past, and figured I might as well get one special edition. It arrived a few days ago, and since the envelope was too large to fit in the mailbox the mail carrier was kind enough to avoid crumpling it and drop it and leave it in the gutter in front of the mailbox instead.

I can’t imagine that the invoice is in any way tailored to the customer in this case, and I don’t see how they could know that detail anyway.

Can confirm, mine has the same address (and other details, I think).

Uplink remains awesome. I still occasionally daydream about ways to design a multiplayer game based on it…

I haven’t played it, but isn’t hackmud basically that?

Also worth mentioning, but not multiplayer:

This is a lot like Uplink, the very little I played of it.


This is a bit more like if the Matrix was an incremental game, but has some similar trappings. Don’t sweat the programming aspect too much, there are totally scripts you can download from github that automate most of the things, so you can focus on the other aspects of the game.

I know Kotaku isn’t necessarily the most popular around these parts, but there are still some good writers there:

Hacknet of course if pretty directly inspired by Uplink, but those others do look like they have a little of the flavor. It’s odd that so many games in the genre went the route of being heavily commandline based… one of the best bits of Uplink was that it abstracted most of the hacking behind that movie-style interface. A lot less realistic, but very easy to get into.

It is kinda odd that so many went with command line style, but I suspect that was a natural reaction to the fictional cyberpunk VR description of cyberspace. VR-style interfaces mostly suck and people wanted to be more realistic. Since the beginning there’s been a sort of clash between the fiction and Hollywood hacking vs. how do we depict this in a more realistic way and still make an actually usable interface.

While I really loved Uplink, I felt the UI was half-baked. It kinda had the right idea, but didn’t actually behave the way a GUI does in Windows, Linux, or Mac. No tab-focus, you had to hover the mousepointer over a text box to type into it, etc. Good-looking, but oddly clunkier to use than even a native UI.

One that I think got that part really well was Decker (the 2002 one, not the 2019 one). That uses a standard GUI for out-of-matrix stuff, but when you’re in the matrix each of your programs is bound to a key. No remembering and typing out command lines and switches, no clicking through a clunky menu UI. You just hit a single key to run a program. Or click to target something and then hit a key.

It’s lightning-fast and quickly becomes reflex. If I were a decker with only a few seconds before a trace-and-burn caught me, that’s the UI I’d want.

Download Decker for free. Decker is a cyberspace hacking RPG where you hack into corperate systems to perform missions for rival corperations. Success lets you upgrade your skills, hardware, and reputation to take on more diificult jobs.