After the fantastic previous film (Avengers: Infinity War) much was riding on this film. A whole lot of build up and anticipation. There were actually huge queues at the theatre yesterday, five days after opening night.

The film takes place five years after The Snappening, when Thanos murdered trillions. The film completely fails to explore the consequences of the snap, using it only as window dressing to drape “dramatic and heartwarming reunion” around it, completely wasting character development and dramatic tension.

After the fantastic run of films from 2017-2019, a ton was riding on this film. So much potential. And all of it wasted.

Spectacle, not story, was at the heart of the shambling mess.

And I enjoyed that spectacle. But it was creatively, societally, and narratively a trainwreck.

If only Marvel had put their foot down and waited until the Fox Deal was completed. If only Sony hadn’t rushed for a September Spiderman sequel.

I have a lot of thoughts which I’ll be exploring in a later essay.

Thus is basically why I’m not rushing to see it. I was already underwhelmed by the previous film, and while since positive reviews seem to be genuine, others are hard to believe.

I’ve also come across a few “overall I thought it was good, but this part really upset me”, which always makes me wary.

I’m not trying to be contrary. I loved it. Yes, there was absolutely no investigation of what happened with the subsequent snappenings. That’s something all the subsequent movies are for. Alternate timelines are so heavily used because they give a franchise the flexibility to tell the stories that the filmmakers want to tell. This three hours is very we’re-here-now-in-this-moment. I didn’t need to know what happened to Rogers after the five-count. I want to know. I suspect that the Scarlet Witch show will touch on it.

It was much more watchable and had a lot more emotional range than Infinity War. MHO

The Avengers Just Took Over Our World. We Need to Talk.

With “Endgame” hijacking the box office — and the cultural conversation — five writers assembled to discuss these superhero-saturated times we live in.

I enjoyed that spectacle. But it was creatively, societally, and narratively a trainwreck.

I don’t know what anybody was expecting besides what we saw on the screen.

I mean, the first three weren’t great cinema either.

I was glad to see Dr. Banner doing so well, anyway. They should’ve made his voice deeper though.

Same. I already know the story and I still don’t want to see it right away. I can wait for streaming when I can pause it for a bathroom break.

Best line I heard from someone walking out. “I guess I should of watched Infinity War.” If you’re invested in the Marvel Universe, you’ll enjoy it. They reduce the cast of thousands to the original avengers. They provide closure to multiple Marvel movies and introduce the new cast. Less action, more character study.

I guess I should of watched Infinity War .

Heh, I can’t imagine understanding this movie at all if one hadn’t seen Infinity War, or really appreciating it without seeing nearly all the other movies too.

Personally, I hated Infinity War. Thanos was a dumb villain with a dumber, nonsensical plan. (E.g. no understanding of population doubling times, no discrimination in what kind of “life” he was destroying half of (further unbalancing ecosystems already in crisis), no thought that maybe he could use the stones for a productive solution… he was literally “The Mad Titan” and people, including fanboys, just kind of went along with his motive instead of pointing out how moronic it was. The comic book version where he does it to woo Death was less stupid, and… that was stupid too.

OK, dumb villain, what else? Infinity War was the story of “heroes” fucking up repeatedly due to their own selfishness, stupidity or just rotten luck, and the trickster genius types failing to be trickster geniuses. The soulstone thing on Vormir was completely unconvincing (I don’t believe Thanos had genuine love for Gamora). The whole “we’re not going to let Vision sacrifice himself” thing was a dumb move. And the ending of the movie felt like it did fans a grave disservice, not just ending on an extremely depressing note but also with the meta-knowledge that several of those characters had sequels in the pipeline and therefore the stakes were essentially zero. I left the theater pissed off and did not watch Infinity War a second time as I have with several other MCU movies.

Endgame was fun. It was literally, fun. Sure it was serious at times, but it had a sense of humor that Infinity War entirely lacked after the Strange/Thor/Loki scene. It was a solid heist movie. There were a ton of payoffs and callbacks and I’m afraid I shouted “yes!” a couple of times and laughed my ass off at a couple of them. I even liked Tony Stark in spite of myself.

The soulstone scene on Vormir was dumb again and I’m annoyed that they killed off Nat that way. (Didn’t she have a movie coming up too, or did that get cancelled again? Prequel? Bleh.) But that, and maybe the Thor fat jokes, was all that bugged me about the movie. 3 hours didn’t feel like a long time at all.

or really appreciating it without seeing nearly all the other movies

I agree with just about every point except that Infinity War has become tolerable and enjoyable in a I hate the fact that Desdemona has to die kind of way. Fat Thor allows Hemsworth to still show up, but without the personal trainer.

That’s the thing. They’re still setting things up in each new movie, even without the shitshow failed loop closure. 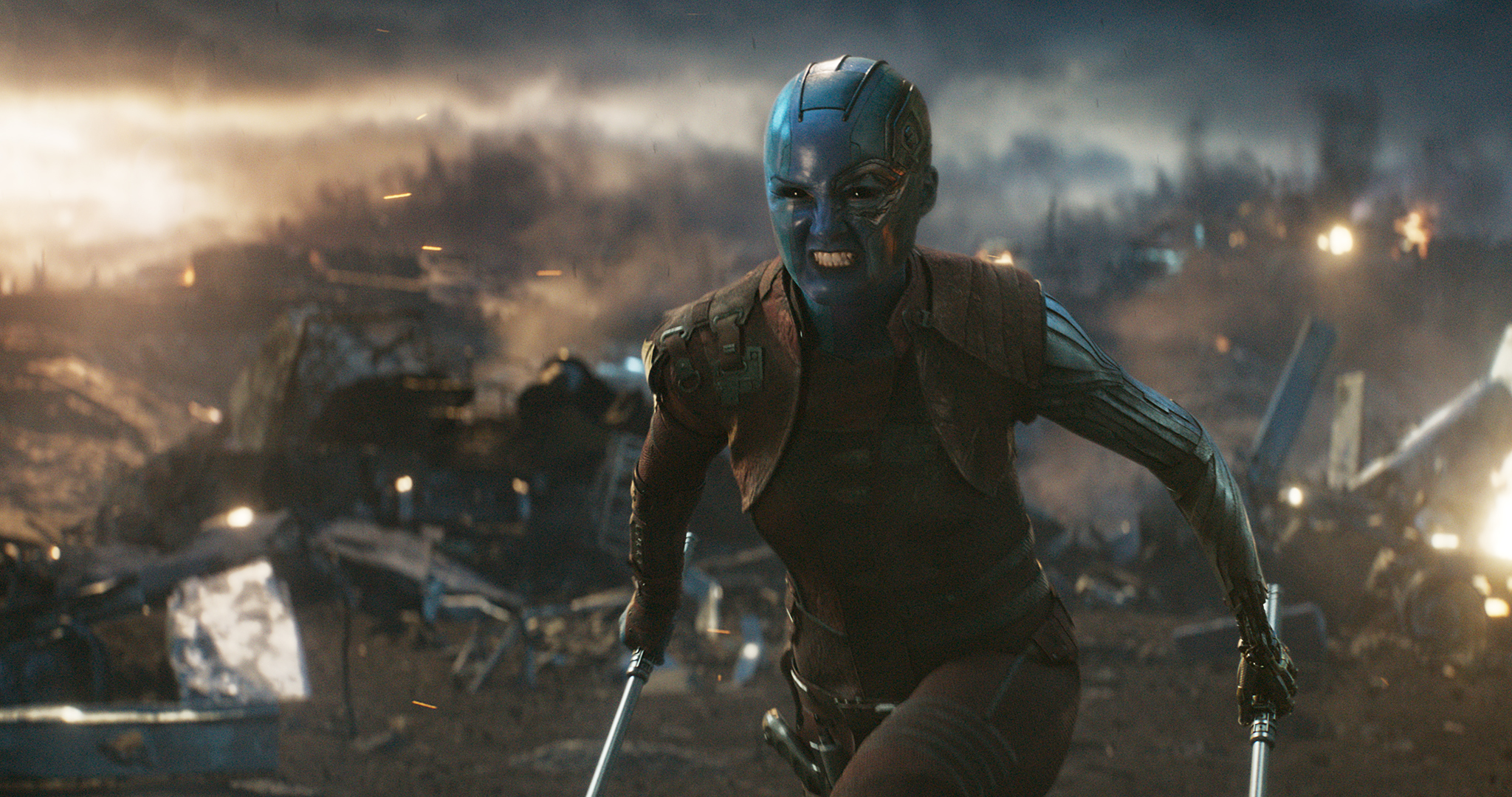 The Legacy Of Character in Avengers: Endgame

There were a ton of payoffs and callbacks and I’m afraid I shouted “yes!” a couple of times and laughed my ass off at a couple of them.

In the part where Captain America takes up the hammer, someone a few seats down loudly said, in a slightly awed tone, “How is he doing that??”. Then repeated it a few beats later in the fight. Then a few beats after that…

He actually stopped us as we were heading out and asked if we knew. We mentioned the whole “worthy” bit and that they had been hinting at it through the earlier movies, which led to a reply of “dang it, now I’m going to have to go back and re-watch all the other movies again”.

For the most part, it worked.

Other than the usual coincidences which are the mainstay of Marvel movies (e.g. Thanos being arbitrarily powerful depending on what the fight scene requires, to the point where he was more powerful without the gauntlet than with it), and the fact that the end was spoiled for me (but still worked, because I had a totally different vision of how that went down), the only thing that really bothered me was when Steve showed up at the end, despite the movie having repeatedly told us having told us that time travel does not work that way.

All in all, though, a satisfying conclusion to the MCU (and a much, much better movie than Infinity War), so I think I’ll hop off the bus at this stop. I’m fine with not watching any more of these.

Edit to add: This thread is tagged with a spoiler warning, so why are we all whispering?

I’m no superhero movie fan, but I have enjoyed and appreciated the effort that Marvel has put into making their MCU movies fun and entertaining and not totally 100% stupid. I mean, the whole genre is written for eight-year-olds, and the Infinity Stone arc has always felt like it was conceived by those same eight-year-olds, but the roles are consistently well-cast and the banter is fun. Even though I was never invested in any of them, I still somehow ended up watching nineteen (!) of the twenty-two MCU movies. And I’ll watch the upcoming Spider-man one, too, not necessarily because I want the last bit of closure on the Tony Stark arc, but mostly because Tom Holland is a hoot.

But once Far From Home wraps up Phase Three, I won’t feel an urge to watch any more superhero movies for a good long time.

But for what it’s worth. I thought Endgame was mostly lots of fun. Plenty of holes, and yeah, the variability of Thanos’ power irritated me no end, but other than all the illogical and silly stuff, I found it a satisfying finish. I’m happy with Steve Rogers’ ultimate fate. I figure if anyone could be careful enough to pull it off, he could. The assumption is that he was there all along, living out a happy retirement where none of the other characters knew him except Peggy. He deserves that.

I’m happy with that, too. Kill that final time-rule-breaking conversation with Sam at the end (or have it as a flashback before leaving, or a recording, or whatever), and it’s fine. I’m just annoyed, after all that hullabaloo about “Changes made in the past don’t affect the present” (without which the rest of the plot of the movie doesn’t work) that they would just throw that rule out, with no particularly good reason or explanation.

Things I liked: Scott finding Cassy alive and well, the prospect that Gamora is out there for The Guardians to find, Tilda Swinton!, and Credible Hulk. Also, a whole theater full of people saying “we won’t bend. we won’t break” along with T’Challa.

Things I didn’t like: Tony’s little girl growing up without dad, Nebula’s time-fluxing brain, Captain Marvel just sorta being there, no Ravager fleet!?, and the total absence of Vision. Also, having to figure out who the kid in front of William Hurt at Tony’s funeral was supposed to be (it’s the kid from Iron Man 3, if anyone else was perplexed by this).

Summary: I don’t think the Russos really know how to do “lighthearted” popcorn romp very well, and seriously underestimated how popular Black Panther and Captain Marvel were going to be.

“Changes made in the past don’t affect the present”

It didn’t change anything – Old Steve had always been there

I’ll say it again: the plot of the rest of the movie depends on time travel not working that way.

Does it? I mean, if traveling back through time starts up a new timeline (albeit one where there’s an aging Steve Rogers living out his retirement with Peggy somewhere out in Pasadena or wherever, AND a younger Steve Rogers patiently snoozing away in the polar ice, waiting to be defrosted in 2011 or whenever it is), then who’s to say that that particular new instance isn’t simply the timeline we’ve been watching all along since the first Iron Man movie?

Never mind what Banner said; that was all just handwaving. If you can go back in time and interact with it at all, then Steve can go back to be with Peggy. And as long as absolutely nothing he does for the rest of his life happens to alter the course of history (in this case, the history as he lived it in the MCU movies), then there’s no logical reason why it wouldn’t work.