First round of the election is tomorrow. My girlfriend’s voting pack came in the mail a couple of days ago, it came with these: 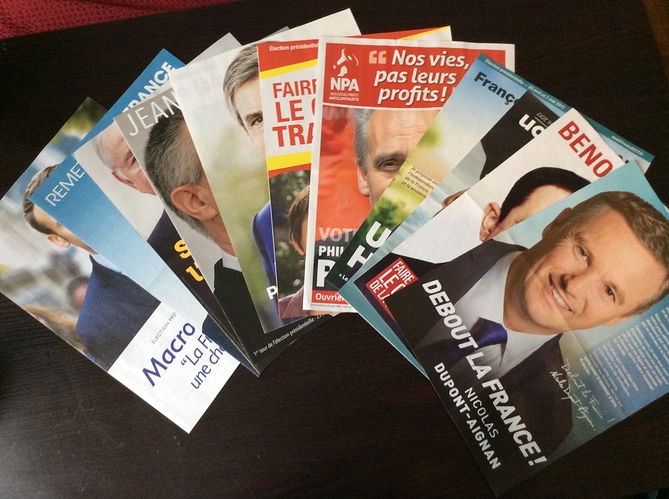 Every candidate gets a two page spread. I like it, good old fashioned propaganda like they used to make. You can hold it in your hand, you can read it or you can cut them up into little paper people and make them do battle. I can’t vote but I thought it might be fun to leaf through before they get culled down to two. Here they are in order of whatever. 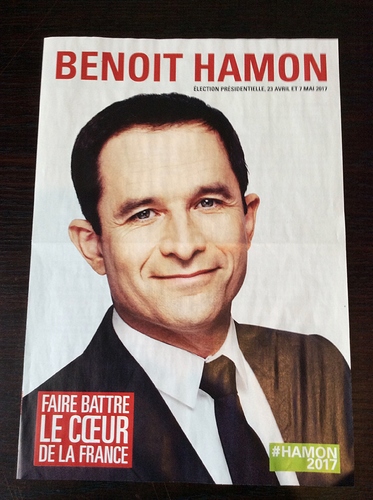 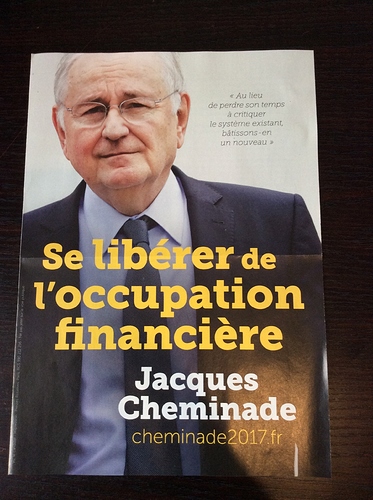 Jacques Cheminade: Break Free of the Financial Occupation
People I know voting for Cheminade: None.

One of the “everything’s fucked and we need to change it” crowd. Thinks Frexit is a great idea. 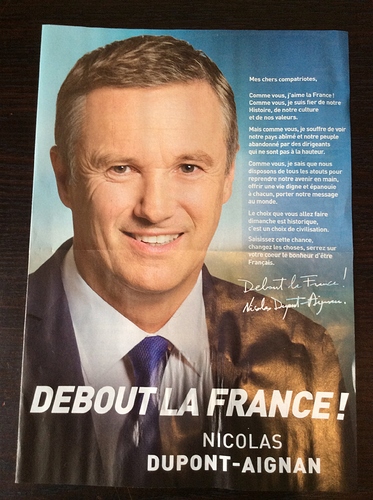 Maybe that’s a loose translation of his slogan, but this guy sure does seem to love France. “My dear compatriots, like you I love France, like you I’m proud. Like you, it pains me to see our country wrecked and abandoned” oh wait that took a turn. 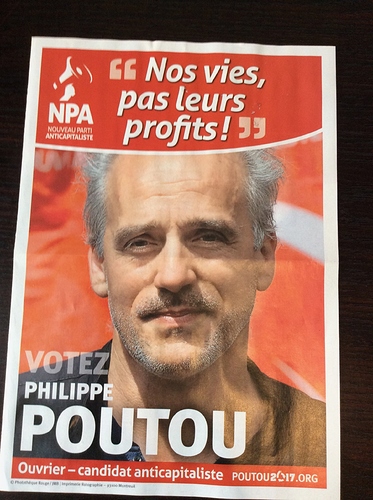 Philippe Poutou of the New Anticapitalist Party: Our Lives, Not Their Profits
People I know voting for Poutou: Nobody, but you can tell everyone kinda wants to.

I watched one of the last debates with some friends and Poutou was easily the crowd favourite. When I get asked who I’d vote for I say Poutou to get a laugh. He is up in the other candidates’ shit about everything and he does it well and it feels good. His own policies are nothing new though, or at least nothing new for an anticapitalist. 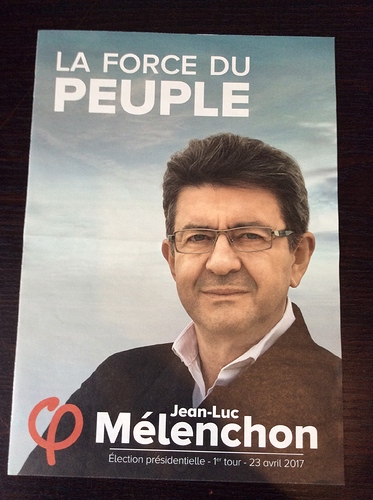 Jean-Luc Mélenchon: The Power of the People
People I know voting for Mélenchon: One guy for sure, probably others.

Left wing, which is nice, but he wants to start up some shit with the EU and I’m not into that. I feel like there’s a streak of entitlement that runs through French politics, when I think France should be showing some leadership in terms of international aid and cooperation. Anyway. 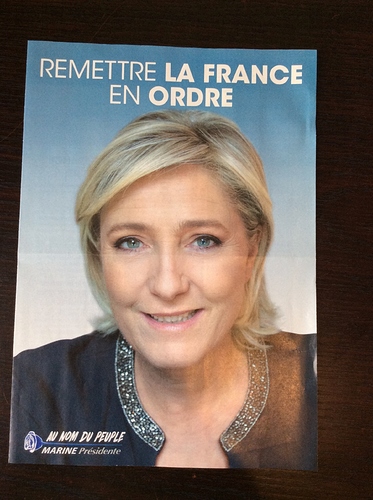 Marine Le Pen: Put France Back in Order (in the name of the people)
People I know voting for Le Pen: Don’t worry none. 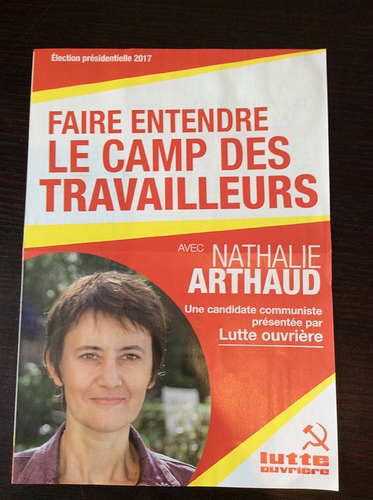 Nathalie Arthaud, a communist candidate presented by the Workers’ Struggle (or maybe Workers’ Battle?): Make The Workers’ Camp Heard
People I know voting for Arthaud: None.

I feel like she already got everything into her title so I’ll leave it at that. 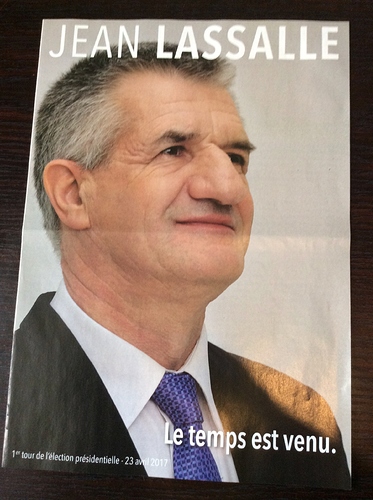 Jean Lassalle: The Time has Come
People I know voting for Lassalle: None.

To quote the great Bill Hicks, debating with Lassalle is like boxing a glacier. He will get to the end of his sentence come what may, whether you try to interrupt him or just fall asleep. No support here in PSG land but I imagine he plays well with retired rugby players. 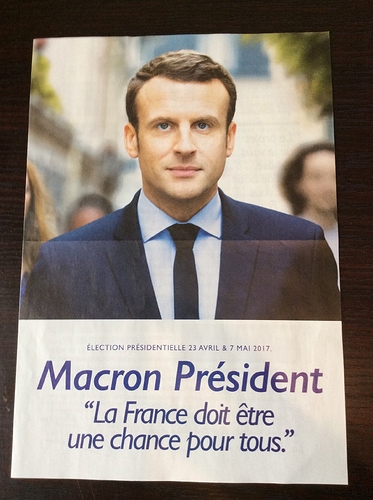 Emmanuel Macron: “France must be an opportunity for everyone.”
People I know voting for Macron: Some. 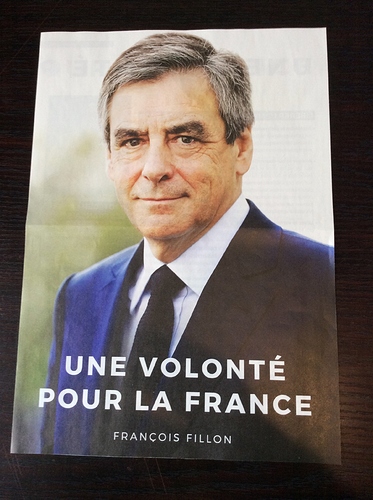 François Fillon: A Will for France
People I know voting for Fillon: Mmmmaybe somebody?

I’ve heard a few jokes about voting for “one of the -ons”: Fillon, Macron, Hamon, Mélenchon. I just can’t think of anyone who was super enthusiastic about this guy. 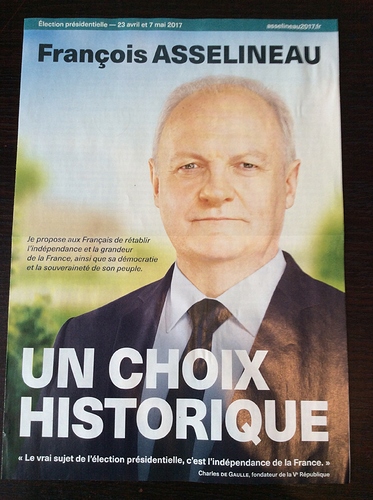 François Asselineau: An Historic Choice
People I know voting for Asselineau: None.
“The real subject of the presidential election is France’s independence.”
Charles de Gaulle, founder of the 5th Republic

So, do you want me to open any of these? I’ll try to translate a bit.

Since the French system is a run-off, why not vote for an outlier like Poutou if that’s closer to what you want?

It’s not really a runoff though, it’s a two-round plurality vote, and since all the polls are saying it’s Le Pen in the second round, for a lot of people I know it then becomes a one-round vote for who you want to see in the second round against Le Pen, where all the same perverse “a vote for third is a vote for first” logic of a first-past-the-post system comes into play.

A common conversation here is whether to cast a “useful vote” or a “vote of conviction”. I’ve been at a 60th birthday party tonight and I’ve spoken to three people in exactly the same cycle of logic. They’d like to vote for Hamon (polling fourth I think), a reasonable left wing candidate, but the worry is that the second round will be Mélenchon (third) v Le Pen (first). Mélenchon is left wing but similar to Le Pen in terms of his position on Europe, so the fear is that he won’t sufficiently motivate voters to come through in a direct head-to-head with Le Pen, which could lead to the worst case of a Le Pen victory. In which case, maybe it’s better to vote for Macron (second). He’s right wing economically but he should beat Le Pen without trouble, so maybe he’s the safe choice.

I’ve spoken to yet more people here who have gone through the same cycle and come out either pragmatic (Macron) or idealistic (Hamon). Everyone seems to agree that it’s a bit funky as an electoral system and something where you just vote your conscience without all the strategizing would be preferred.

The other thing is I might have overstated the attraction of Poutou. He’s great when he’s skewering the hypocrisy of the ruling class, but less inspiring when he’s promoting his own policies.

Oh god, that sounds nasty when you put it that way – having a candidate for practically every position in the coordinate space. When I voted for Minneapolis mayor they use a “rank your top three” system that isn’t exactly game-proof – no voting system is – but it at least gave me the chance to vote for my favorite and a pragmatic alternative.

[…] but the worry is that the second round will be Mélenchon (third) v Le Pen (first).

What worries me about this scenario is that people may object to Le Pen based on principle while she is reasonably good at making her platform sound harmless unless you are reading between the lines. Mélenchon on the other hand seems to advocate some immediately controversial stuff like scrapping the constitution. I can shake the feeling that to many who are not very committed to opposing Le Pen he may seem like the less safe choice.

In May there’s also a parliamentary election which is more of a proportionate, vote your conscience type thing, but even there I’m told the actual apportionment of seats is skewed in some weird ways that I don’t yet understand.

I’m starting to think that maybe any voting system can be broken by the simple act of thinking about it too hard. News outlets here are proclaiming that Polls Are Not Predictive even as they report the latest results, and everyone I’ve spoken to seems to accept this as a fact, and yet it’s still the polls that have created the narrative of Le Pen as a looming bogeyperson which in turn has driven the logic by which pretty much everyone seems to be casting their votes.

You can for sure do better than the French system though. I like MMP, x% of the votes gives you x% of the seats, give or take. Instant runoffs seem OK but I think there’s a lot of confusing leeway in how you add things up. I’m also not sure I’m a big fan of presidential elections in general; I think you can get by with just parliamentary elections.

I’m starting to think that maybe any voting system can be broken by the simple act of thinking about it too hard.

All voting systems have been broken by thinking about them hard. And provably, too: In social choice theory, Arrow's impossibility theorem, the general possibility theorem or Arrow's paradox is an impossibility theorem stating that when voters have three or more distinct alternatives (options), no ranked voting electoral system can convert the ranked preferences of individuals into a community-wide (complete and transitive) ranking while also meeting a specified set of criteria: unrestricted domain, non-dictatorship, Pareto efficiency, and independence of irrelevant alternatives...

As for the French Electoral System, The two-round vote was really only put in place so that De Gaulle would be guaranteed to win when he stood.

For the candidates, it looks like it’s going to be Macron against the lepenistes, with Fillon and Mélenchon just behind- could we have more from those three if you’re going to translate more for us?

It’s Macron vs Le Pen. I don’t know enough about French politics to guess how this will actually play out so I’d be interested in any commentary you have on this.

Seems like Macron is the mostly-centrist outside-the-system choice, while Le Pen is… well… yeah. Current polling is 60/40 for Macron.