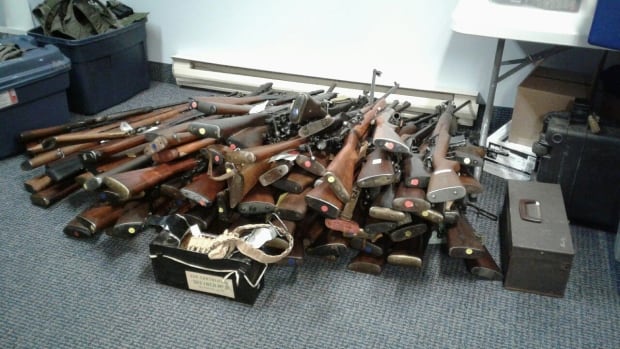 RCMP stumbled upon 100 unsecured guns earlier this week while checking on a home in Nova Scotia's Yarmouth County after the resident misdialed 911, police say.

Um…he was holding them for a friend, RIGHT?

I know I’ve been marinating in gun culture because that photo doesn’t even look scary to me.

I don’t have enough exposure to guns to identify these, but the majority according to the article are long guns, rifles, and from the picture at least some of them look to be bolt action. So at least for some of them, I’d assume not as dangerous (to other people, in most situations) as other possibilities. Difficult to conceal, less maneuverable in close quarters, and you would want some range between you and your target.

On the other hand, even if I’m right on that, 94 of them just lying around unsecured is a rather bad decision. And absolutely no excuse on the handguns…

Yes, they appeared to me to be manufactured for sanctioned hunting of animals. But geez, how many hunting friends does he have? And I agree with you on the handgun, those are specifically for killing humans.