More Than Four Dots in a Row

Over in the “And Then The Murders Began” thread, I attempted to correct a user’s Morse code for H (four dots), but couldn’t post more than three dots, no matter how many I entered. Is this a feature of Discourse?

Game: "And then the murders began." Culture

I was about to correct you and say that H is (four dots) not (…), but I find that Discourse won’t allow more than three dots in a row.

Where’s your precious First Amendment now, Americans? And then the murders began.

(It looks like it won’t allow mixing regular periods with html entities, but using just the html entities alone ( &#46; ) gets you there.)

Interesting. Looks like it might be a markdown feature that I was previously unaware of. Looks like it can be worked around by using a backslash prior to a dot to prevent the conversion to ellipsis.

Here’s a setting that applies to titles:

I don’t think it applies to content. @messana’s explanation is likely correct.

I double checked. Whatever it is, it’s not in the original Markdown.

Discourse likely uses something that complies with CommonMark. The most recent thing I can find suggests Discourse probably uses markdown-js with some custom bits. It might be something we could consider a Discourse bug.

I’m not in a position to test the vanilla markdown-js at the moment so I’m not sure that’s where the issue is. (It’s not outrageous to mock something up but most of my JS these days doesn’t involve the DOM and it could take me literally hours to put together an HTML/JS file that would let us test since I don’t have any working DOM code handy.)

For the time being, for something long like a Morse code segment, I’d suggest using backticks around the entire Morse code segment as a workaround. It’s shorter than \.\.\.\.ing your way through the whole thing.

Note: Copying my text directly may have odd consequences. There are some invisible characters in the mix to keep Discourse from turning the four periods into a three period ellipsis. I suppose you could use invisible characters (&zwj;) yourself but if you’re not keen on learning HTML entities, the backticks are probably an easier solution. Plus that would make the workaround even longer.

I use Haroopad extensively in my own work because it has a bunch of neat features. It’s a cranky mess and likes to crash in part because of the neat features. The different libraries they put together weren’t meant to work with each other. Since they do “smart” things like auto-ellipsing and smart quoting, I figured I’d check to see how they handled … elongated ellipses.

Note: This is a screenshot. Inside the post preview, that’s not obvious. 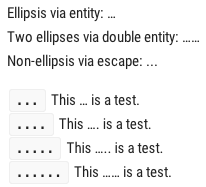 Thanks for the very detailed and useful reply, and for allowing me to complete my life list of “characters on my keyboard that I have used”. (I had to look for it.)

In human terms, can the triple backtick be roughly translated as “display the text exactly as I type it”? (“Dammit” implied)

* Oh hey, look, I can put an asterisk at the start of a line without it changing to a bullet point! Bliss is it in this dawn to be alive!

In human terms, can the triple backtick be roughly translated as “display the text exactly as I type it”? (“Dammit” implied)

In a sense, yes. I forget what the exact terminology is but it’s meant for typing in blocks of code (to share with others) that might otherwise have parts that would be misinterpreted as formatting. The downside is that it puts a grey background on things.

The backslash escape @messana mentioned is better for most things. Including putting asterisks at the beginning of a line.

Typing this:
\* No grey background :‍D

It’s just kind of obnoxious if you have a long string like Morse code since you’d be typing \.\.\.\. every time you needed four dots.

I believe it’s usually referred to as “preformatted text”, or in some cases just the “code” option.

Yeah. Preformatted text and codeblocks (again, not sure this is the right term) are sometimes different things with subtle differences in how they behave. In Discourse, it’s a bit confusing. Code and Pre seem to work exactly like each other except that Code has a grey background and Pre always forces the start of a new line.

I’m sure there’s a purpose to all this but the only parts that make any sense to me are the backticks and the “four space” lines.

This appears to be the interpreter that Discourse is using: https://markdown-it.github.io/

The ellipses appear to be related to the typographer option, which you can see in the demo linked above.

I’m willing to entertain a conversation about disabling this setting, but the case will probably have to be stronger than the desire to simply enter morse code, given the workarounds shared above.

What if we wanted to play classic games? 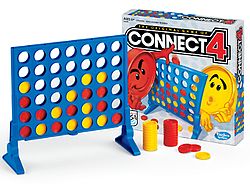 Connect Four (also known as Captain's Mistress, Four Up, Plot Four, Find Four, Four in a Row, Four in a Line, Drop Four, and Gravitrips (in Soviet Union)) is a two-player connection game in which the players first choose a color and then take turns dropping one colored disc from the top into a seven-column, six-row vertically suspended grid. The pieces fall straight down, occupying the lowest available space within the column. The objective of the game is to be the first to form a horizontal, ...

(sorry, it’s just that this is what always pops to mind every time I see the title of this topic pop to the top…)

Great, now I want a bot that lets us play connect four.

Or people could just learn to write messages without the numbers 4, 5 and 6 or the letter “h”.

Tink of it as a callenge!

I’m willing to entertain a conversation about disabling this setting, but the case will probably have to be stronger than the desire to simply enter morse code, given the workarounds shared above.

Considering how many things it would change, I’d definitely agree with just leaving it as-is and letting people do workarounds for Morse code on the rare occasion they want it. xD 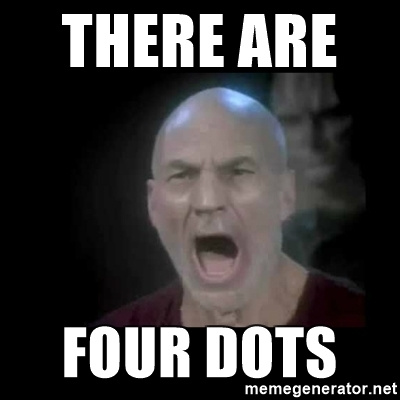 Considering how many things it would change, I’d definitely agree with just leaving it as-is and letting people do workarounds for Morse code on the rare occasion they want it. 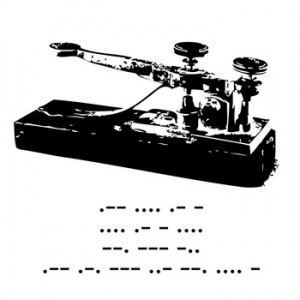 What have I wrought?

It’s not about the Morse code.

It was never about the Morse code.

Well, a little. The Morse issue was just the trigger that got me thinking about various formatting problems I’ve had in the past, such as inputting a whole line of periods or something like that. I appreciate all the responses. I’m sure that with your and @messana’s advice I can face Discourse alone. I feel strong and confident.

inputting a whole line of periods