OnePlus and Google release Crackables, a crypto puzzle game with a grand prize 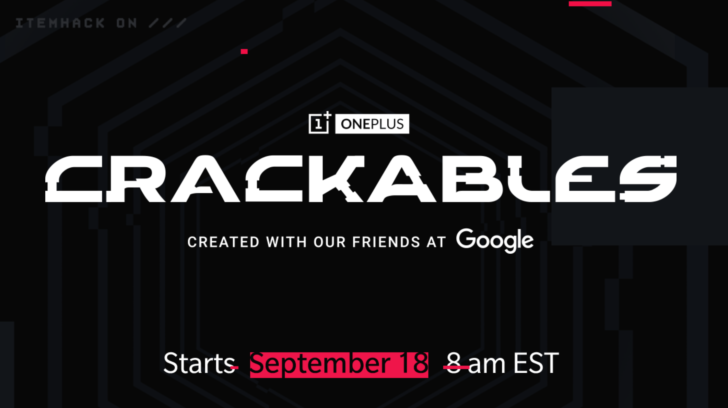 OnePlus and Google release Crackables, a crypto puzzle game with a grand prize...

OnePlus and Google have just announced a new game called Crackables, featuring a mix of real-life and digital puzzles. Various rewards will be dished out... by Ryne Hager in Games, Google, OnePlus, Videos

This is potentially interesting.

I’m stumped. I got to the one that looks like it’s a simple “trace a route through every node and line without doubling back or visiting the same node twice” puzzle but there are too many nodes with multiple lines coming out of it for it to be solvable in that way.

The clue says “how many corners does a circle have?” and each node is a different shape; either a circle, pentagon, rhombus or triangle. These shapes are randomised each time you restart, which makes me think they are red herrings.

Weirdest of all, it wants me to give a text answer, not solve the ostensible puzzle. I have no idea at all…

Ah, I solved it and it’s reasonably obtuse. I’m willing to share my answers so far but when I finished that puzzle, it told me I had to sign in with Google, but every time I try, it just opens a new browser tab and then closes it again.

ETA: it only works in Chrome or Safari; don’t bother with any other browser, even if it’s chromium…

I’m on the same puzzle; does the colour of the lines/nodes have anything to do with it?

Edit to add: I mean, I’ve figured out what the shifts in colour correspond to, but is that important in any way?

Trace a line through all the nodes and the code you have to put in is the number of corners in each shape in order. So if it starts off circle, circle, rhombus, triangle, the code would be 0043 etc.

I tried that. Repeatedly. It doesn’t like the order.

If the password isn’t going to include the first digit again at the end, don’t allow me to connect the path back to the first node.

Yeh, I’m over this. I got up to “The Answer” and it’s not a puzzle so much as a random “spin stuff around and eventually you might line up things in exactly the way we had intended” waste of time.

The previous puzzles at least felt like there was something to them. I’ve googled the solution to it and I still can’t get it to line up in exactly the way the designers intended (because it’s a 6-axis puzzle and they’ve given me two axes of control), so that’s that then.

There were a couple of nice puzzles that could be thought through but mostly this game just felt like fighting against bad UI.

There were a couple of nice puzzles that could be thought through but mostly this game just felt like fighting against bad UI.

Yeah, I’m currently at “describe this symbol to me.” Any description other than the letter it most resembles has failed.

Okay, that’s done, and the next (really frustrating, much more than the earlier, similar one; I had to work it out on paper). My phone is starting to die at this point, so I think I’ll leave the rest 'til tonight.

I still can’t get it to line up in exactly the way the designers intended (because it’s a 6-axis puzzle and they’ve given me two axes of control), so that’s that then.

I’ve solved two corners of it, and, AFAICT, it can be solved with two axes of mobility (and if you get close enough, it will take you the rest of the way automatically).

I’m more frustrated by “Trace a Path from A to B Part II: Hazard Pay”

There. I’ve reached as far as the game goes (for now). The sixth wall cannot be brought down yet, and I have the first three parts of the final password (the fourth is obvious from the other three, but I don’t think it’ll let me enter it unless I get selected for the last part of the game).