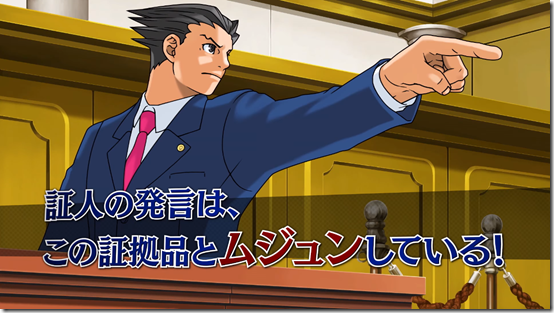 Capcom announced during TGS 2018 that Phoenix Wright: Ace Attorney Trilogy is coming to all modern consoles and PC via Steam, and collects every case from the first three games.

I mean, I’ve already bought these games like 4 times (DS, Wii, and iOS - twice) but what the hell, they are so great I’ll buy them a fifth time.

I mean, I’ve already bought these games like 4 times (DS, Wii, and iOS - twice) but what the hell, they are so great I’ll buy them a fifth time.

So, no objection to porting them again, I take it?

I thought I would be interested in more when I bought a DS (original), but the only game I really, really enjoyed was the first Ace Attorney (I never played any of the sequels).

I liked Trauma Center: Under The Knife, but it’s not as compelling as Phoenix Wright. I really liked Advanced Wars, but I’m bad at that kind of game (turn-based war strategy). I did really, really like Mr. Driller: Drill Spirits, which I would say is probably my favorite arcade-style game ever (most others of which get boring to me very quickly).

However, Phoenix Wright is the only thing that has ever really brought me back to the fun of the Lucasarts point-and-click adventure games I loved back then (obviously the game mechanics are different, but the feeling you get playing is similar). I dressed as Phoenix Wright for a video-game-themed Halloween party once, because I had a similar blue suit to his and I don’t care about most any other video game characters, but only a couple of people even knew the game.

Now, I know there are a ton more obscure Japanese games like that I would probably like, but to be honest I just don’t have free time to fall into that rabbit hole. I did not know the Phoneix Wright games were on iOS though so I may at least play the sequels I never played.

but the only game I really, really enjoyed was the first Ace Attorney (I never played any of the sequels).

The first three are excellent - especially Trials and Tribulations. It wraps up several story arcs the span across all three games.

The later titles were still good but not as good as the first three - they lost some of the magic. Still very much worth playing.

Spirit of Justice was freaking excellent though - mostly because it had a story arc with major links to the original trilogy and beyond.