I was just thinking what if facebook brought something like 23 and me.
Potentially a massive boom to personal medicine or a massive way to exploit people. Either way the insurance industry will be completely changed.

I’ll go with answer B.

In particular, it sounds like the kind of dystopia we’re headed for, if nuclear annihilation doesn’t destroy us all first.

Add in the Chinese idea about the personal/social credit score, because it would be such a clear fit, and I’d start rooting for that annihilation.

Where was the silly/fun thread again? Imma need a kitty or something.

So is anyone else getting the ads for crispr clinical trials.

What are they trialing? Interested because I run a lab in .be that does clinical trials testing, and we’re a year or so away from opening a new DNA lab in Galway, Ireland, to handle an expected demand for consumer-grade/patient ordered (vs diagnostic through your doctor) DNA testing.

BTW, when I had my own Ancestry DNA test done, I used a pseudonym. I occasionally get an email from someone thinking they’ve found a new branch of their family, and they’re so disappointed when informed that, no, I’m your cousin RatMan and you know me well. The RatsClan has a surprising number of members. Many branches and offspring a few generations back makes for interesting genetics now.

No sorry joke on my part.

Ok simple crash course crispr is an immune defence in bacteria that defends against viruses by dismantling their dna. It has great value in the world of applied biology as it can let us edit genes down to the level of a single letter cheaply easily and reliably.
I’m sure there are others here who can provide more details.
Needless to say this is big and far reaching.

Whoosh! Was that it going right over my head?

Didn’t say “good” joke it’s just the ads I see coming if facebook had genomes to pair with profiles.

I’ve wondered a lot about how DNA legal rights will play out. Like maybe you don’t give your insurance company the right to see your DNA, but they have access to a close family member’s, so they might still be able to see you have a 50% probability of having a particular at risk gene, etc…

But more likely DNA scanning is just going to be as common as fingerprinting so there’s not really going to be any control of that info, anyway.

And it could be very scary indeed. 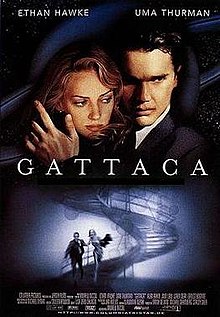 Gattaca is a 1997 American science fiction film written and directed by Andrew Niccol. It stars Ethan Hawke and Uma Thurman, with Jude Law, Loren Dean, Ernest Borgnine, Gore Vidal, and Alan Arkin appearing in supporting roles. The film presents a biopunk vision of a future society driven by eugenics where potential children are conceived through genetic selection to ensure they possess the best hereditary traits of their parents. The film centers on Vincent Freeman, played by Hawke, who was The f...

Kind of expecting it to become so commonplace in a generation or so that it will be like when they have all the kids at school make fingerprints (presumably to help find them if they get abducted, but they never talk about how that’s supposed to work, and we all assume it’s going into an FBI database).

And random businesses and institutions will use your DNA for ID - instead of giving the last 4 digits of your SSN, you’ll be prompted to enter the tail of your gene sequence. Then identity theft will get really messy.

Thats a film I keep lending out as it hasn’t been seen by enough people.

I’m surprised by both who has and who has not seen it when it is brought up.

Last time it was Lunch Table Discussion, two of my fellow SciFi peeps had heard of but not watched and two of the “not typically into SciFi” people at the table had seen it. Both thought it was interesting.

Maybe because it doesn’t have space battles, killer robots, or disgusting parasite creatures?

You could be right it can’t be sf it only examines a potential future through the lense of fiction.