Retail "Benefits" Are An Insult 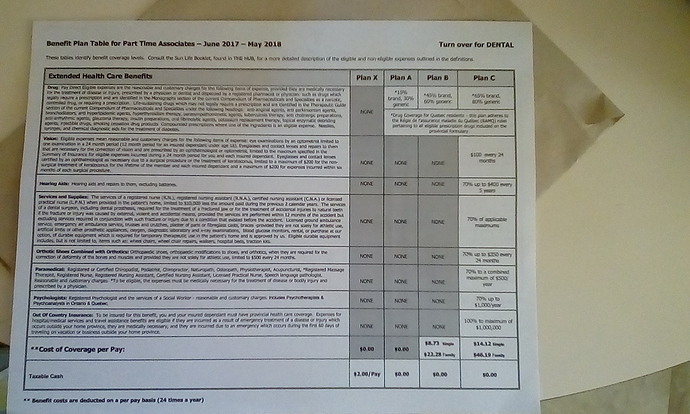 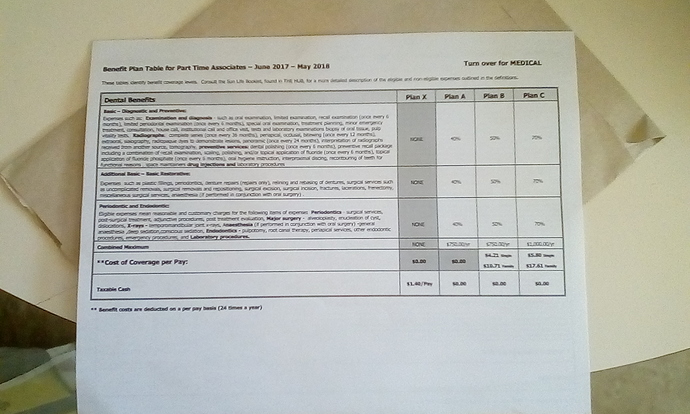 Benefits are a scam. Unionize now.

Who is that for?
Cuz most retail places don’t give benefits at all. I’d have loved this when I was working at The Bay!

And for our American friends, this is “paramedical” benefits. aka: prescriptions, glasses, massage, orthotics, etc. Basic coverage for things broken bones, surgery, cancer treatments (include cancer screenings, mammograms, pap-smears et al), etc. All are covered under each provinces health care.

There is a lot of growing noise to make things like glasses, dental, prescriptions covered for all Canadians. (like the UK) Ontario is starting to cover every child, until 18, I think (I don’t have kids so I don’t pay attention), so thats a start. But those lean years between childhood and adulthood are gonna suck for dental care. I know I didn’t see a dentist for 10 years because of the cost.

It’s from Staples. The basic (free) tier essentially covers the tax on prescriptions and a discount to dental (limit:750 in savings every two years). Apparently Wal*Mart is worse, but the local Wally gives far more hours…

businesses want slaves and nothing more.

I never had any benefits when I worked retail.
Not even when I worked for Godiva Chocolates, wholly owned by Campbell Soups! Who you would think could afford it. I guess eating free chocolate all day was benefit enough!

Where are you again? AB?

What’s weird is how Saskatchewan is the province that first introduced universal healthcare.

The idiots here keep electing conservative right-wing grifters. For the past decade and a half.

Retail bennies in a union environment aren’t that much better. It took ages for grocery (almost all the major chains are under UFCW) to bring onboard bennies, and even longer to straighten out privacy issues (oh, prescription coverage is only good in your home store, which means some of your co-workers get to know way too much about your medical history!).

Unions tend to be more helpful outside of the extended medical arena.

On another note, it’s surprising how much variety there is in extended medical plans, right down to the number of hoops you have to jump through to be covered.

There is a lot of growing noise to make things like glasses, dental, prescriptions covered for all Canadians.

I thought Canada had modern health care? My family just got passports in case we need to flee to somewhere civilized in the near future and we thought Canada would work.

Benefits are a scam. Unionize now.

When I worked retail it was luckily at places that had relatively decent benefits, but I was full-time. Part-timers really got the shaft. Never understood why health care was tied to employers anyway, let alone the differences between full-time and part-time. It’s just wrong. On all levels.

Basic health care (doctor visits, hospital stays – no extras like TV or single rooms, mind) are covered by all provinces. Some cover dental or vision, some don’t. Lab work is generally covered. My province covers prescriptions for people below a certain income level. It doesn’t cover dental (except possibly emergency surgery in a hospital) or vision care, though it used to. Psychiatry is covered, psychologists aren’t.

Right now, I am trying to figure out something that is wrong with me. This means multiple doctor visits, lab tests and probably a specialist. I pay directly for none of it (I pay my taxes, so some people would argue that I do pay, but not like in the States). If I need surgery, it’s covered. I would have to wait if the problem is non-lifethreatening (pretty sure I am good) because contrary to propaganda, the more urgent cases tend to be prioritised.

Never understood why health care was tied to employers anyway, let alone the differences between full-time and part-time. It’s just wrong. On all levels.

Never understood why health care was tied to employers anyway,

That goes back to the three years when the USA actually was a socialist country: 1942-1945.

The large-scale factories, like the massive bomber plants that GM built 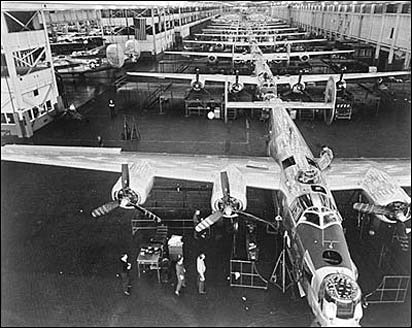 , needed a huge in flux of new workers.
But there were wage and price controls, so the big employers couldn’t use the traditional method for attracting workers: better wages and/or working conditions.

Instead, the management figured that complicated, high over-head “employee benefits” were easier for big companies to manage (per employee) than small companies. So the big employers made “employee benefits,” like health care and pensions, available to all workers instead of just the privileged upper tiers. And we’ve been stuck with this model ever since.

(obviously, the story is way more complicated than this. But not a bad starting place for a blog post 8)

So, even though I pay in taxes, it still averages out less than the US. If a country with Canada’s population can leverage this, imagine what one the size of the US could do, if it wanted.

Hey now…my mother’s maiden name was Carpenter, and she and many of her relatives lived in Detroit at one point in time or another, including me.

What does that expression mean, by the way?

Broker than broke. When the recession hit, the builders were the first to feel it… Even in Canada, the industry has not recovered.

Some of them are working, mostly for Habitat for Humanity, by the look of certain areas.

As to the topic:
I have no idea what my benefits will be at the locally-owned, non-franchise craft-supply store at which I work, 'cause I won’t be eligible for them for another ten months or so.

My son, however, works for Wal-Mart. He went through Michigan Rehabilitation Services, who then moved him to Jewish Vocational Services, who got him trained and got him the job. He’s been there as part-time for over a year, so no benefits.

Health insurance for both of us comes from the Healthy Michigan Plan through the MI Dept. of Health and Human Services, administered by United Healthcare. But life insurance (when I was a kid, I thought that meant you paid it and as long as you did, it ensured you would live, lol), disability - nope, for both of us.

To me, the most important benefit at my place is that it’s close. For him, it’s the 10 percent discount and the fact that they have lots of deals on the action figures, etc. that he collects.

The biggest insult, not from the employer, is from customers who treat us like we’re their servants.

So here’s a thing I only just realized…
People (Americans) are freaking out about “who is going to pay for it” in regards to universal healthcare… because they think healthcare is really expensive.

Every other nation on the planet already knows this is lie, that healthcare does not need to be as expensive as it is in the USA. But America is just used to paying 10x for things, they just assume that is the cost. No wonder everyone is freaking out! 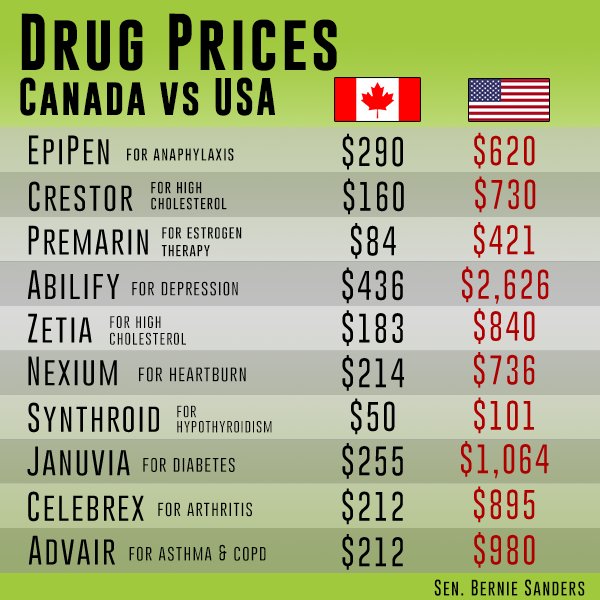 And yet Canada has some of the highest drug prices in the world! Its just compared to you guys we look great!
Which is such a problem for us, we need to look at the countries that are doing this well, and see how we’re failing and how we can get better, but we don’t, we always compare ourselves to you, and say “well at least I don’t need to go on TV to get addiction treatment!” and its shite, and I hate it. Bah!

When Jennifer* was laid off, it wasn’t paying the mortgage she was worried about – it was paying her drug bill. The $24,000-a-year cost of Enbrel, used to treat her rheumatoid arthritis, had been covered by her employer. She remembers sitting in the...

I am not sure I ever paid even that much for Synthroid.

So yeah, even without extended medical, we’re better off.