Scroll, and on supporting an internet without ads

Some time ago,I signed up for Scroll as a way of supporting sites indirectly after Google Contributor was more or less cancelled. Yesterday, I received this email from Scroll: 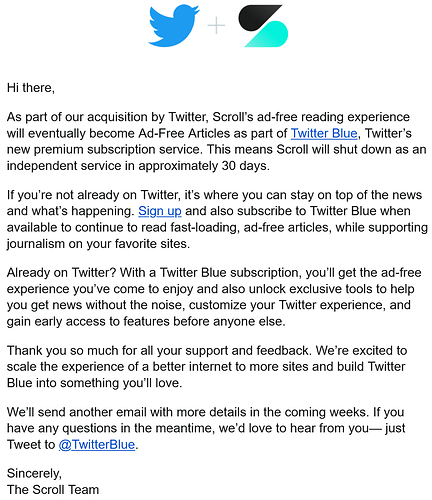 image1080×1250 105 KB
I wasn’t that much of a fan of Twitter back when I had an account, and I’m not particularly inclined to reactive my account in order to either pay more for a service I already use in order to support the other features of Twitter Blue, or pay some part of my monthly subscription to Twitter and likely leave less going to the sites I’m trying to support. Also I don’t see how this isn’t a conflict of interest for Twitter. Even if it somehow isn’t, I don’t think they’ll be a good steward of the service.
Alternateto.net has zero alternatives currently listed, so I’m not sure what my options are going forward. For those sites which use Patreon or OpenCollective or some other direct payment, that’s an option, but it doesn’t scale since I’m not just going to add another $5 monthly payment for every site I visit, and that’s not even possible for those sites which don’t offer other ways to support them.

Assuming that another service like Scroll or Google Contributor becomes available, what’s to stop this cycle from repeating again? Short of implementing something like Project Xanadu (also – warning: contains Jeff), how does this issue have any meaningful solution?

Late reply, I know – I miss Flattr being a thing; Flattr had the option to auto microtip every time you visited a site. It’s something that its competitors like Patreon or [groan] Brave Attention Token fail to replicate.

Flattr isn’t dead, but it’s mostly dead. And that sucks.