Well worth the read. Taser defends themselves by saying the weapons shouldn’t be used on people who may have heart problems or seizures – but that’s exactly who they are being used on. Shock Tactics: A 911 call, a Taser shot and the toll of stun guns

In a first-of-its kind study of deaths involving Tasers, Reuters finds coroners have listed stun guns as a cause or contributor in more than 150 U.S. fatalities

The main problem isn’t the tool, but the people.

The cops who use it as a shortcut. The sales and PR people at Taser who are doing everything to ship more units. The popular culture surrounding them – one of the things that makes me wince about one of my favourite shows is how casually it tosses off Tasering people as a joke.

In many of these cases, the victim was already contained when police showed. The cops could have easily retreated to a safe distance and talked.† They could have tried listening to the people pointing out the health conditions. But Tasering is faster, so they move to it.

The other problem with less-lethal* devices like this is that the psychological barrier has been lowered. Even as members of the general public, we think they’re better than a gun and encourage their use: we forget that they, too, are supposed to be a weapon of “last resort” when all others have failed. The problem there is that other methods are hard, draining and often emotional, and humans in general are lazy and will take shortcuts when possible. And double-down on the excuses when those shortcuts fail.

*Less-lethal is the correct term, despite smartasses who try to ask “how can you be only a little bit dead?” Less-lethal simply means that the statistical likelihood of it killing an individual is smaller than with other methods. Which doesn’t make it safe, but – feeding into the psychology above – makes it more palatable.

ETA: † This was one of the findings in the Braidwood inquiry into the death of Robert Dziekański. Unfortunately, the coroner’s recommendations are non-binding.

Dziekański’s situation was especially heartbreaking because he wanted the police to come, having given up on the airport employees who kept misinforming him and blowing him off.

People need to stop acting like Tasers are some Petronicus spell.

Very revealing article. I’d also like to see stats not just on fatalities but on serious injuries (broken bones, lost teeth) resulting from falling five or six feet down to pavement.

That’s why I kinda like “less-lethal” as a term: once you understand what it means, it’s a reminder that these things are still fucking dangerous. It’s when people call them “less-than-lethal” that I don’t like, because it implies that they are not deadly when they are.

California cops used to regularly pepper spray people who then later died, and the victims were usually said to have tested positive for cocaine.

This made me wonder

So just “shouldn’t be used on people” then?

does the combination of cocaine and pepper spray kill people?
does pepper spray cause people to falsely test positive for cocaine?

IANAD but I would guess no, to both; pepper spray is mostly just capsaicin, albeit at incredibly high concentrations, and there’s nothing in chilli peppers that should cause an interaction or a false positive.

My guess as to the cause of the correlation is that cocaine is terrible for the heart and there’s already a link between cocaine use and heart attacks generally.

A long term coke habit having already weakened the heart, cocaine in the bloodstream already heightening pulse (and blood pressure, iirc) combined with the shock of suddenly eating 3 million scovilles worth of capsaicin seems like it would trigger a heart attack pretty easily…

This made me wonder

does the combination of cocaine and pepper spray kill people?
does pepper spray cause people to falsely test positive for cocaine?

Or do police departments play CYA with disturbing regularity?

An alternate term would be “torture mechanism”.

They’re designed to achieve the effect of force without the mess.

The main problem isn’t the tool, but the people.

Years ago I had to design an interesting little test system for lightning simulation. In the course of this I consulted with H&SE (Health and safety executive) on safety interlocking and possible induced currents.

The tl;dr is that there is NO safe level of electric shock for the human body and a Taser cannot be regarded as a nonlethal weapon.

Taser: Can't say our weapons killed somebody unless the autopsy says so. Also Taser: If the autopsy blames our weapon, we might sue you. https://t.co/VCmooICbCc 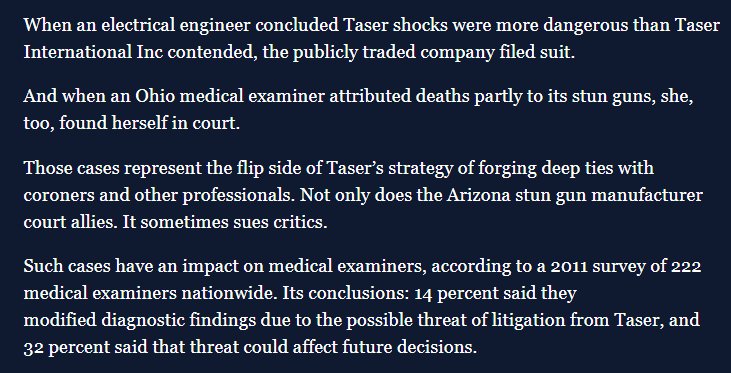