I suspect @PatRx2 and I may get a tad nerdy, however that isn’t a requirement nor a need for this thread. Pop music, classical, punk, noise, new wave, you name it. It is welcome. This is a free, open space to discuss the music you love.

I have been thinking of a melodic song in the style of Lush Life. In B Dorian, to D major, back to B, then F#. The bridge in Straight ahead E 1/4/5.

I lack lyrics at this time

THis is going to be a long post, here’s the artists that have my attention at the moment:

Hristone “Kingfish” Ingram, this kids got something special.

EDM/Jazz, ultrafunk IDK what else. If there is any justice in the world this should be the future of pop music (Alas, there is not, however, this may still happen):
Knower
CD to listen to “Think thoughts” Followed by "Life"

And in the last category: "Give it up, nobody needs you making music, Jacob Colliers got you covered"
Jacob Collier.
Check out his CD "In My room"

Moved a couple of weeks ago, Now I have my own study/office/studio but everything is still a mess. Slowly starting to get back into songwriting mode. For a long time I was very unhappy with my lyrics, it’s not that I never liked my writing, it’s just that it never felt like anything I wrote mattered but I feel like I’m finding my writing voice now.
It’ll be hard to point what I like about my writing now since it’s in Spanish, but it’s OK, it’s not your fault.

I don’t usually learn pop songs, but when I do, I like to make my own fucked up version, this one was a request from a friend for his birthday. (Warning, song requests will be met with this same level of passive aggressive hostility)

I’ve been puttings songs aside for a sci fi concept album about the people who stay on earth after everybody leaves for mars, I tried to sit down and write the whole album but most of those songs are forgotten now, so I just write songs and file them away for future use, here’s a couple:

@tachin1, there is only one word. Nice

@PatRx2 very much like strayhorn. But I wouldn’t even… Presume… The more one listens to him the more one knows they need to learn.

However, modelling a piece after a masterpiece isn’t a bad practice for anyone, even very experienced composers. By all means, use Strayhorn’s progressions as an initial scaffold. It’s just that you probably aren’t going to sound like Strayhorn, except as a pale imitation, so you accept this, and you start pounding on the ideas of your piece until they make sense to you and flow properly in your judgement, and, by the time you’re finished, the piece has a hope of sounding reasonably good, and you will have a hope of finding your own voice.

Note that making sense to you often means that the formal framework you inherit can find itself adjusted as you pound on your ideas and make them fit in place properly.

anyone here listen to jandek? i’ve been a fan for close on 20 years now and the more i listen the more respect i have for him and his style. i’m trying to get a wind chime made with the tunings from his second album “six and six”

his earlier music took on the characteristics of blues but with very idiosyncratic tunings and stylizations, here’s two i particularly like from this period–

from 1978 to 2004 he had put out 37 albums of music ranging from the blues and droning styles above to loud and wild music with electric guitars, drums, harmonica, piano, and other vocalists with him. during this time he had no public appearances. then, in october of 2004 he appeared at an outsider music festival in scotland and has done numerous live and studio albums since then. every live show is different, different songs, different styles. here’s one from the 04 performance–

jandek is not the only thing i listen to, i enjoy a range of music with country and western probably my least favorite genre.

two things i’ve been listening to lately are merzbow, with “pulse demon” on repeat

and some mid-90s french hiphop i find very enjoyable–

Whoa! I have some listening to do, thank you!

I was playing around with some progressions last night. They were like if strayhorn and Copland got really high together. Nothing worth saving, but like the old joke goes, how do you get to Carnegie Hall?

Nothing worth saving, but like the old joke goes, how do you get to Carnegie Hall?

Not just practice, but pounding on even silly disposable things. Consider the utter boneheaded simplicity of the material used here: 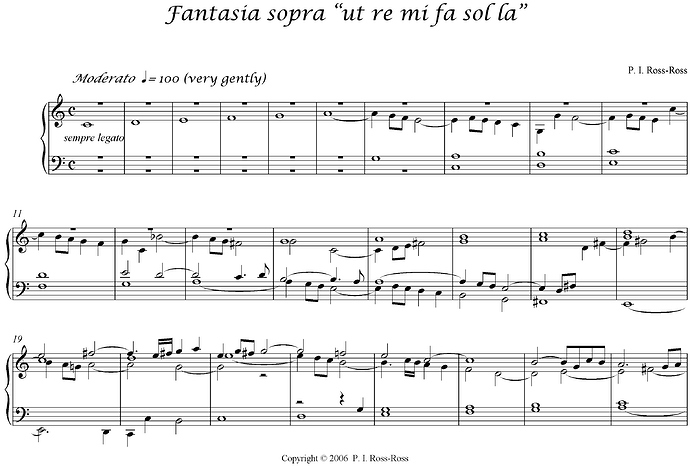 That is pdq quality. But to be a pedant, a sharped forth to make a major second chord breaks the premise of the title.

The Bb major to D major sounds like something I would do.

And an E major diminished 7 leading to a C maj 7 leading to a D major with the fifth transposed in the bass, and a dimineshed chord I don’t recall. Is this literally a test piece of music? It… Makes sense, but makes no sense.

Are you one of my professors? Do I have homework?

The F♯s contribute to a tonicisation of the dominant (G). It’s not out of place if you treat the scale segment from G to E as the answer to the C-to-A segment used as a point of imitation - it’s a transposed Si in that context.

The progression with the B♭ in the descant is (m.11) C, Gm, (m.12) double appoggiatura (Edit: suspension - this and the next one I mention are bloody suspensions! Doh!) to F♯ dim in 1st inversion (on the 2nd minim), to (m.13) G (with an appoggiatura to the tonic in the bass). The B♭ is a modal substitution that suggests that we are in the subdominant region without actually confirming a key of F. The diminished chord is a standard substitution for the dominant seventh.

I’m not sure what you’re referring to in Edit 2, Can you give me the measure number of the start of the passage?

As the B♭ in m.12 is the only instance of that note in the entire passage, I presume that you mean the E7 in m.18. The B held into the following measure is a suspension with a real resolution of G (giving a C chord in 1st inversion). The end of the bar and start of the first bar is a D7 in root position then 3rd inversion. It’s a standard deceptive progression from the relative minor key through the relative major (from A minor to C major in this case) to the dominant (G in the 2nd half of m.20) - my voice leading is just a bit sneaky.

Posting Sam Fish and Jacob Collier together? Are you me?

Samantha Fish is an excellent blues singer and guitarist from the Kansas City area. Her music is straight ahead down and dirty blues. Gives me hope to see Millennials keeping the older traditions alive.

Jacob Collier, man, that dude’s from a different planet. Those harmonies…

The chords I’m using for this are Amaj7/B, D11, some weird chord that I thought was some flavor of D but was actually a really open F# voicing, B6/9, E6/9, and plain old vanilla A7. Not sure of the order, because it’s all been stream of consciousness. Sounds like jazz but quirkier, but I like it. Maybe that’s why I like it.

I hope you don’t mind, I think this is a lot of fun.

Edit two refers to a reduction of measure 22. The bass line drives the harmony in step, which is why given the mode I pointed out the two obvious ways to approach it.

Measure 13 has a close tritone, which is held for a beat and a half. The score even has them approach each other. Like the opposite of chopsticks.

Wait, is it yours?

M.22 is a double suspension to G7 in 2nd inversion (2nd half of the bar), moving to C in first inversion (second half of m.23). It flirts with E min in the first half of m.23 (which would be a deceptive progression, V-iii). The sneakiness is that it is really V-I. The next two bars are IV then V. The alto D in m.24 is an anticipation that suggests an added sixth chord on F or an inverted minor seventh chord on D. This works OK because F and D minor have pretty much the same (pre-dominant) function.

You sly fox. I thought I was analyzing a master’s piece to trick their students. And you did

I can’t play or hear the piece, so it is all in my head. Take this with a giant grain of salt, and is only a question.

There is quite a bit of counterpoint. However the left hand is largely traveling thirds. That is how I would write, and I am curious what your thoughts are on that?

Single suspension leading to C major (and not even a dissonant one). I’m buggering up because the scale size of the illustration is right at the edge of what I can read.

What I think I was doing well with this sketch was using the scale segments in stretto right from the beginning. I think I did the early stretto idea even better with a verset for an organ Magnificat. However, it used a bit of Gregorian chant for a subject instead of the hexachord. The voice leading has points of similarity.