Every genre has a shitty, so-bad-it’s-good representative. In any medium. It’s one of the immutable laws: 1% of crap is so crap it’s not.

Starting off our thread, I present Mako Mermaids:
https://www.dailymotion.com/video/x4rezrv

Words fail to describe the shambling mess it is. A mess on every level, from technical aspects to narrative. The colour grading is off; frame blocking is bad, the scoring is terrible, the audio mixing amateurish at best. Even Canadian shitpasta has more technical merit.

The not-as-successful predecessor to the Big Bang Theory. Came out in time for the heady days of Windows 95. 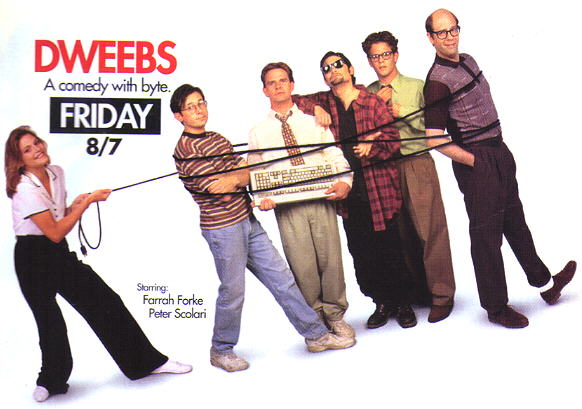 Dweebs is an American sitcom that ran on CBS from September 22 to November 9, 1995, before it was canceled. Ten episodes were produced but only seven aired. The show stars Farrah Forke as Carey, a woman hired to be the office manager of a highly successful software company named Cyberbyte, owned by Warren Mosbey (Peter Scolari). Warren and the other employees (played by actors Stephen Tobolowsky, David Kaufman, Corey Feldman and Adam Biesk), were stereotypical nerds or "dweebs", highly intellig...

Sounds like a mashup of The Big Bang Theory, Silicon Valley, and The IT Crowd

Could be mildly entertaining at least, could be a total train wreck. Either way, I’d watch.

OMG Farrah Forke! Bit actress from 90s sitcoms. Alex Lambert from Wings. Don’t ask me how I know that.

Farrah Forke, plus Peter Scolari and what looks like Stephen Tobolowsky, plus a whole lot of other people I’ve probably forgotten about… this whole thing is a throwback to a much simpler yet unfunnier time. I’d definitely watch.

I watched, as I recall, one-and-a-half episodes.

The on-screen tallent was pretty good. Quite a good cast really. But the writing was not even interesting enough to be a cliché.

I remember enjoying Dweebs. I also remember enjoying the Dilbert animated series around that time as well. I’m not sure how I would feel about them now, as I’m sure some of the appeal was the novelty of being pandered to.

Yes.
“Car 54 Where Are You?”
I cannot stress that strongly enough.
I could write a long post explaining why that show is so great.

Last I checked (which was a while ago) Lucille Ball’s work was still funny.

And people still say good things about Barney Miller and WKRP in Cincinnati.

Porridge seems to have aged fine.

I would quibble with Lucille Ball’s work holding up. There was a lot of racism and sexism in “I Love Lucy”, for example.

Carol Burnett, on the other hand, seems to have aged much better.

Carol Burnett is so funny, but it’s not a sitcom.

I find the genre itself is very dated and do not watch them.

Maybe I was watching one of her later shows. She was doing sitcoms until 1973 at least.

Off the top of my head, no. Perhaps there are examples I never watched (as previously mentioned) but every time I’ve gone back to a “well-loved comedy from days of yore” … it has been painful to watch.

OK. You asked for it. Give me a few days…

Perhaps there are examples I never watched (as previously mentioned) but every time I’ve gone back to a “well-loved comedy from days of yore” … it has been painful to watch.

What about “News Radio?”

Does The Young Ones count as a sitcom?

I feel a bit cringy about some of the actors in it, but the material still holds up.

Yeah, that’s mainly the guy I was thinking of.

But saying it’s his finest work is like finding the bowling ball with the sharpest corners.

When I was in college we would watch the old All in the Family shows and those held up well.