The thread for art.

There’s a thing happening in my area where you paint a rock all purdy-like, write “Post to Broome County Rocks on Facebook” on the back, and leave it for someone to find. When they’re found people post a photo to the group and so the idea spreads. It’s kind of everywhere right now. Does anyone else have this going on in their area?

If not, I suspect that you will soon. 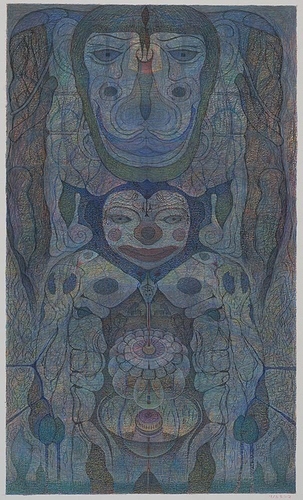 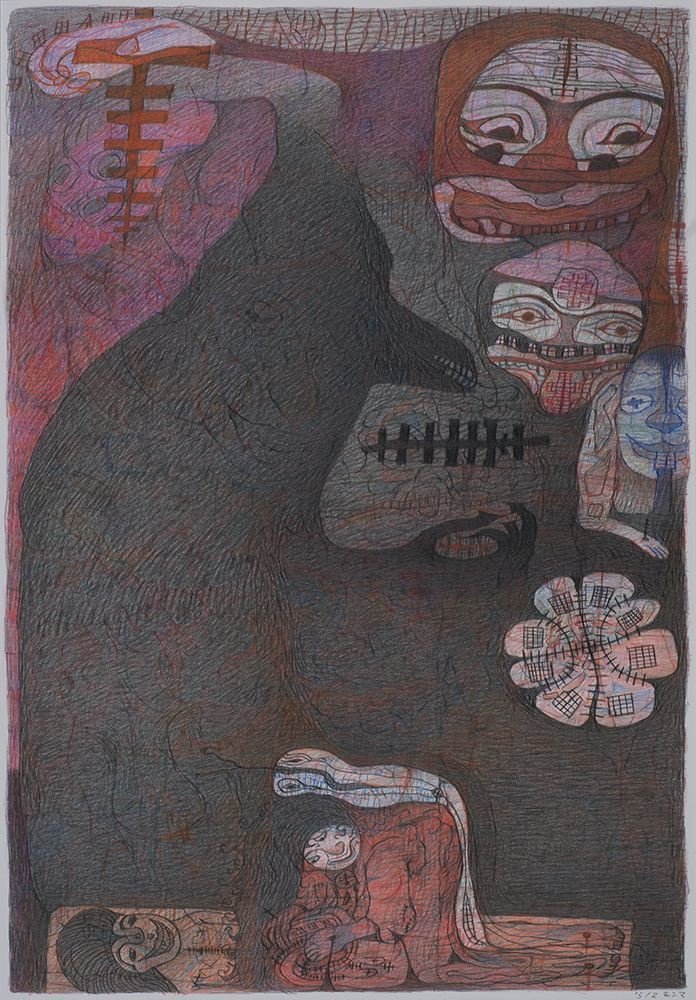 When M'onma makes art, he says his body glows and he cannot see. In this trance, what he calls a "visitation," he creates dream worlds that he sees as di... 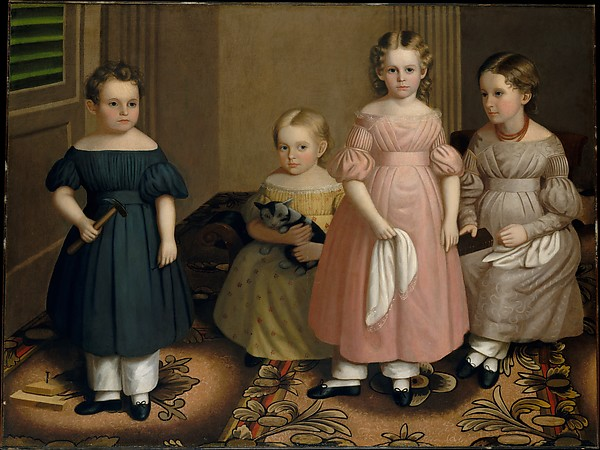 The tragedy of child mortality in the 19th century coincided with, and was heightened by, emerging modern attitudes toward children and the sanctity of childhood. Its most enduring expression may be found the memorial art of the period, of which Oliver Tarbell Eddy’s The Alling Children is a poignant example. The Metropolitan Museum of art identifies it as “the four children of Stephen Ball Alling and Jane H. Weir of New Jersey, in commemoration of the death of the only boy, standing apart at left.” Bathed in heavenly light, he remains present with—and, indeed, painfully close to his sisters, even as he is separate from them.

He has a retreat center not too far from my house.

Apparently he and his SO decided their market is “cheesy magicks people” so I think there is a disconnect between the excellence of what he creates and the space they have created, but his work is gorgeous and well beyond the mystical woo stuff they seem to be peddling.

I love this Sacred Mirrors project in particular. These are about 9 feet tall.

Apparently he and his SO decided their market is “cheesy magicks people” so I think there is a disconnect between the excellence of what he creates and the space they have created, but his work is gorgeous and well beyond the mystical woo stuff they seem to be peddling.

That seems a little harsh. He’s a visionary artist, so the mystical experience is, to some extent, what he’s trying to describe. And, when you dig into it, ceremonial magick isn’t really woo—it’s people manipulating their psychology in order to alter their perception of reality, and the serious ones tend to very conscious of what they’re doing.

Of course, there’s always a lot of new age nonsense associated with that. You just have to cut through it to get to the good stuff.

He has a retreat center not too far from my house.

I just recently became aware of the fact that he’s only a few hours from us. We thought about staying there for a weekend, but I’m not actually a howl-at-the-moon kind of guy, and I figure that if I’m going to go, I might as well wait until the Chapel of Sacred Mirrors is finished.

My wife grew up in Wappinger’s Falls. 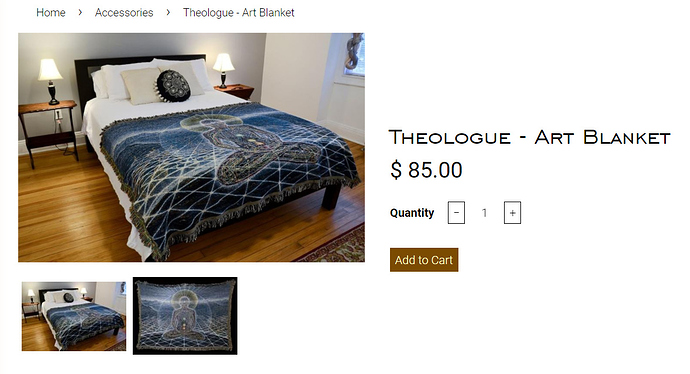 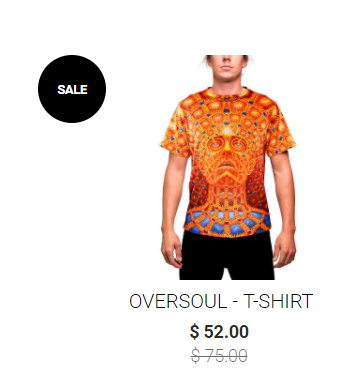 You don’t have to be a howl at the moon person to go - just choose when to be there. We were there when it was quiet. Beautiful grounds and space. Definitely special. Also kind of rough as far as, like, the breakfast was just DIY at best, kind of half-assed and there were places on the grounds that are not tended to.

I think they’ve done a lot and I am impressed with the community they are creating, but there’s this element of the local incense tourist store to their vibe that I think diminishes how skillful he is as an artist.

I was introduced to his art by Tool, of all things.

So, thank you, Tool.

Hi all, sorry I’ve not been around much, but look, I’ve made some art of note: 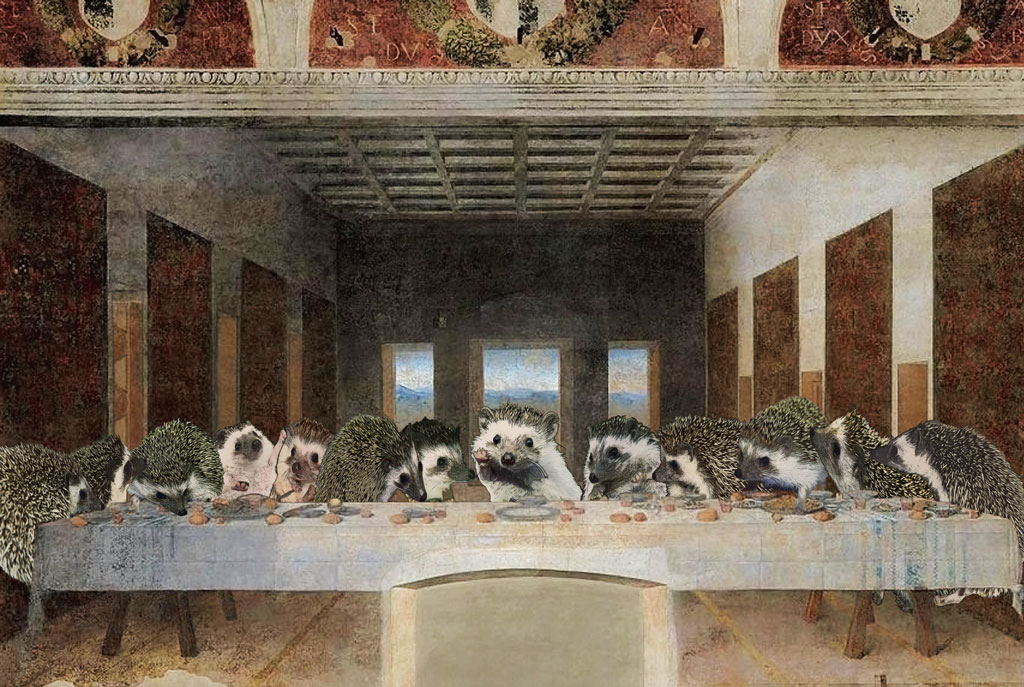 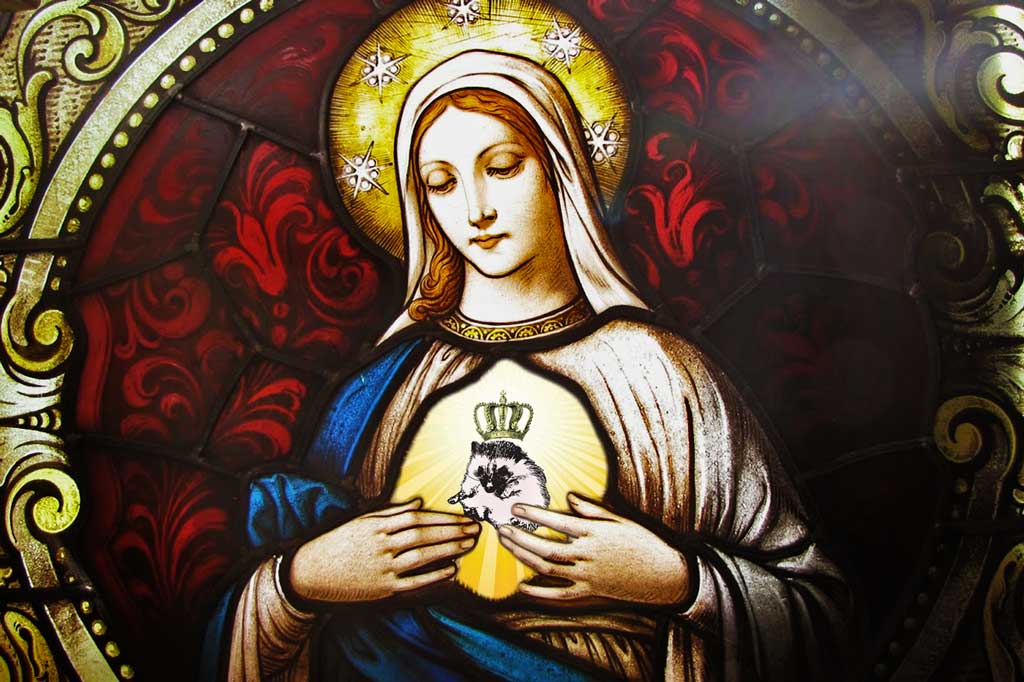 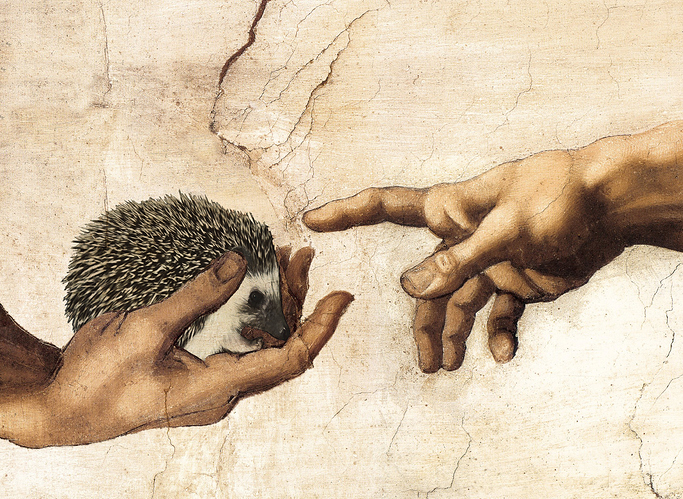 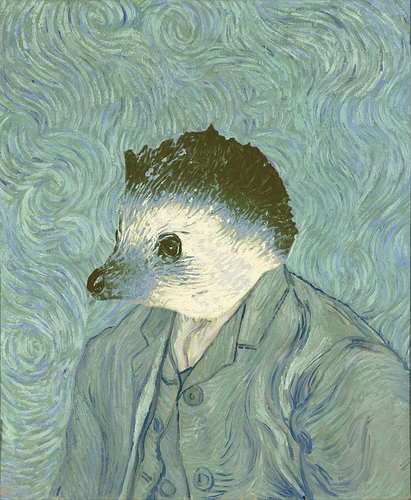 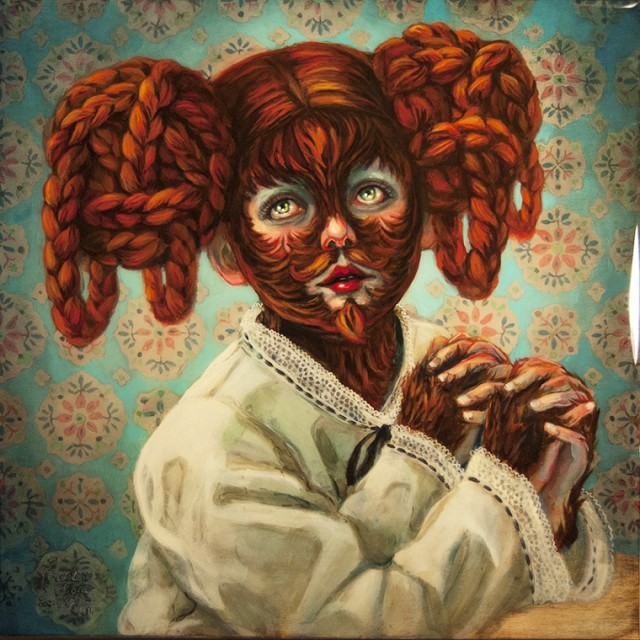 One of the things I’d do if I were a millionaire is hire Lori Nelson to illustrate Anne of Green Gables, with Anne as the monster pictured and everyone else normal. In the book she hates her red hair and thinks it makes her look freakish, so the premise would be that the illustrations are showing her as she pictures herself. 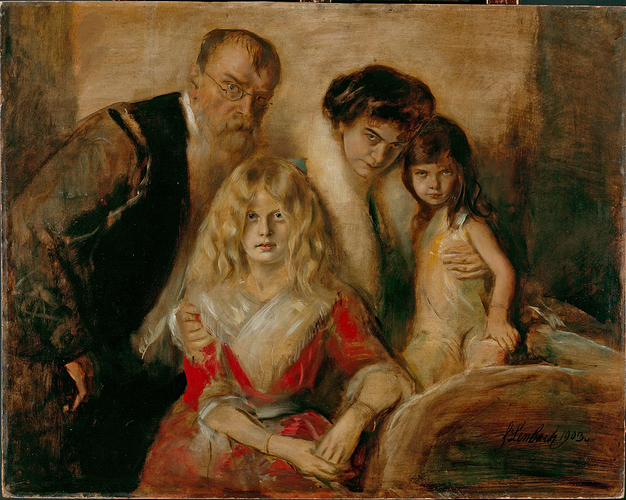 Franz von Lenbach, Self Portrait with His Wife and Daughters, 1903

I love how she’s teaching her daughter the Kubrick Stare. It’s never too early. 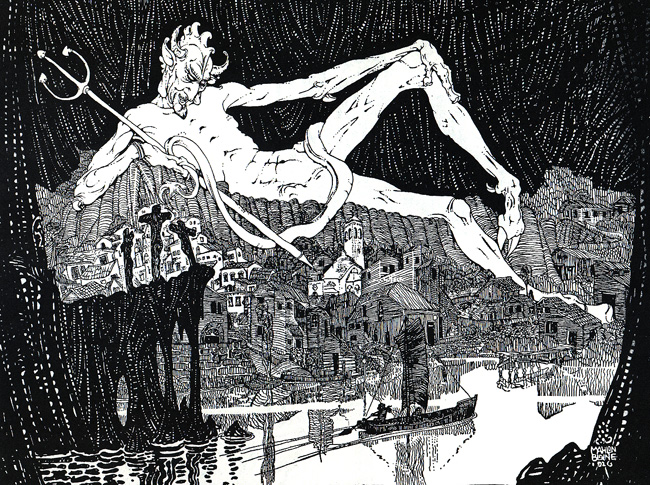 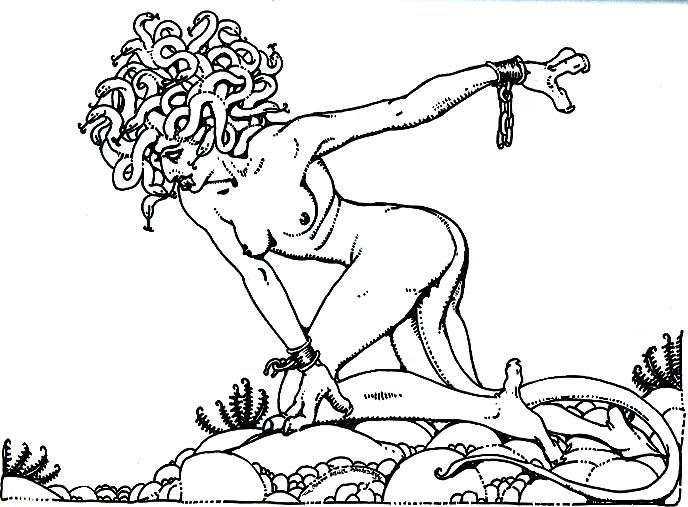 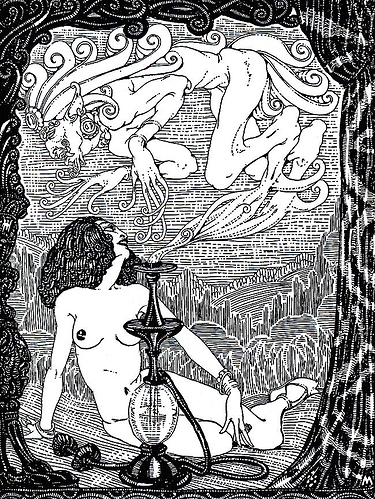 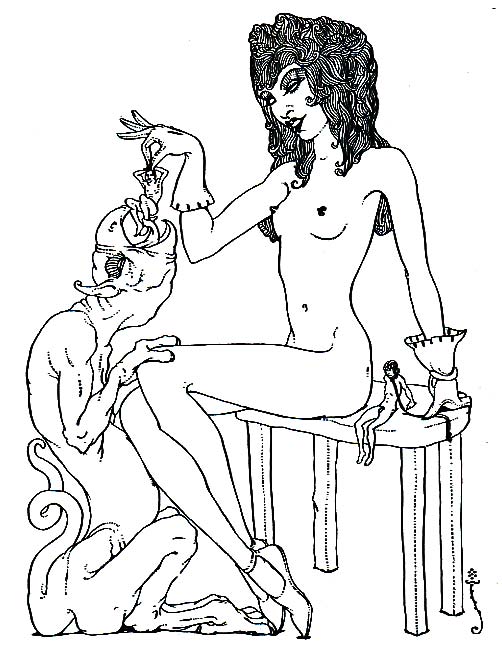 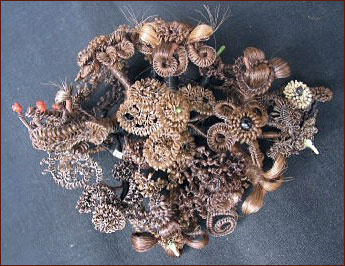 [quote]Mrs. Hamlin of Omaha, Nebraska left a rather curious heirloom to her descendants—an intricately woven bouquet composed entirely of human hair. Buried deep inside, each of its flowers is numbered with a tiny label corresponding one of fifteen names written on a separate index card; those of herself and her loved ones. More than a century ago, each of these people offered up their locks of brown or gray—literally, pieces of themselves—to provide the material for what would become a lasting symbol family unity.

The weaver need not have been the eccentric that one might suppose. On the contrary, she was likely to have been a conventional middle class lady going about her fancywork. She may have included a lock of her own in the wreath, but quite possibly she did not, preferring instead to be present as the sum of its parts; the invisible weaver of family ties. As a good 19th century woman, the domestic harmony she fostered was an expression of herself; her self-portrait in sacrifice.

As Helen Sheumaker describes in Love Entwined: The Curious History of Hairwork in America, hairwork in its myriad forms had not only established itself as longstanding tradition by the latter half of the 19th century, but had become an active fashion. Husbands went to work wearing watch fobs fashioned of their wives hair. Locks from the dearly departed were mounted into rings and brooches. Ladies filled their autograph books with snippets from their friends. At a time of rising commercialism, sentimental hairwork became a way both to signal one’s sincerity and, paradoxically, to stay in style. [/quote]

Now that my right ring finger is no longer hurting - I sliced a tiny bit off of it while slicing a potato - I can start sculpting with the clay from my backyard!

In the meantime, here’s a splatter painting I did a few years ago. Jackson Pollack can kiss my shiny non-metal ass! 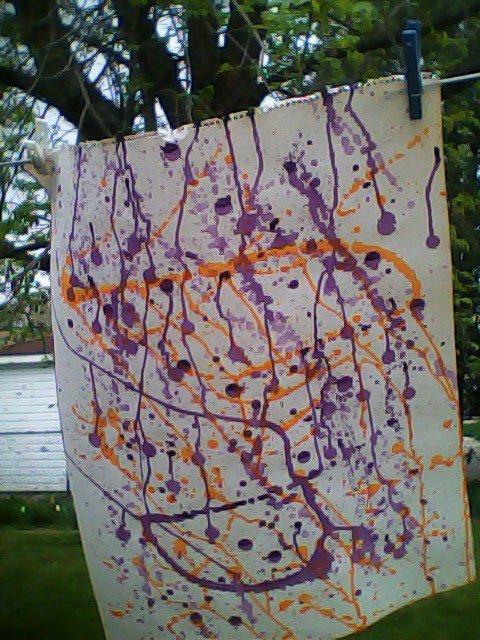 I just came across some exquisite corpses I did with my wife a 2-3 years ago. 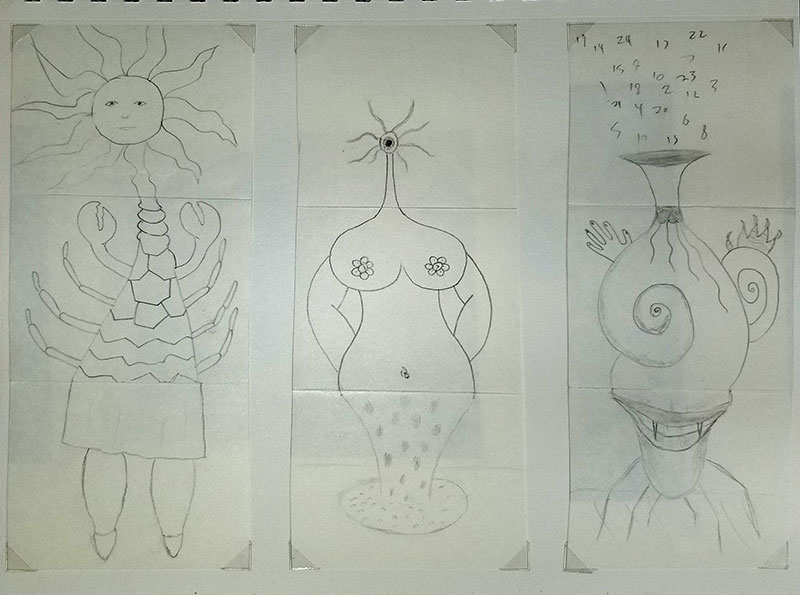 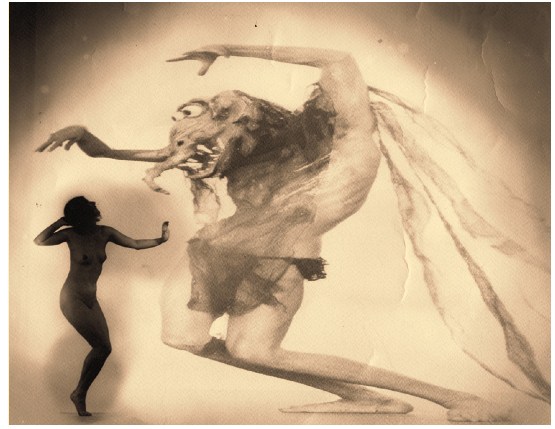 Beauties and Priests, Among Other Beasts: William Mortensen’s Images of Witches, Demons and Sadistic Inquisitors

[quote]If he were resurrected today, almost 50 years after dying a marginalized and maligned figure in his field, photographer William Mortensen would surely have no trouble finding work or creative kindred spirits. His influence and affinities to his work are evident across a range of art and popular culture. Techniques he pioneered for manipulating photographic images–a practice for which he was once disparaged–now have digital equivalents that are widely employed and accepted in photography. A few decades of hindsight reveals him as a visionary and a consummate artist ahead of his time.

These aspects of Mortensen’s work are foregroundedin this selection of 20 prints he made in the mid – to late 1920s. Most are from a never-completed project on witchcraft and demonology, evidencing a fascination with the occult and reflecting his predilection for juxtaposing images of seduction and fear. These relatively early examples of his work yield insight into his personal interests, his ideas about beauty, his affinity for the grotesque, his experiments with montage, and other means he devised for manipulating images to amplify their effect.[/quote]

(NSFW, unless you work somewhere cool)

Thanks for sharing, exquisite indeed!!

I used to be pretty good at bookbinding… 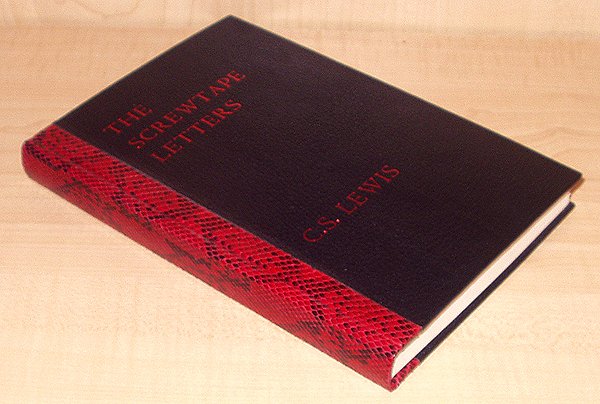 Goatskin boards with python skin spine. The book is a demon’s advice on how to tempt mortals.

The text block finished with graphite.

The Lesser Key of Solomon, in 1/2 goatskin and hand-marbled paper. 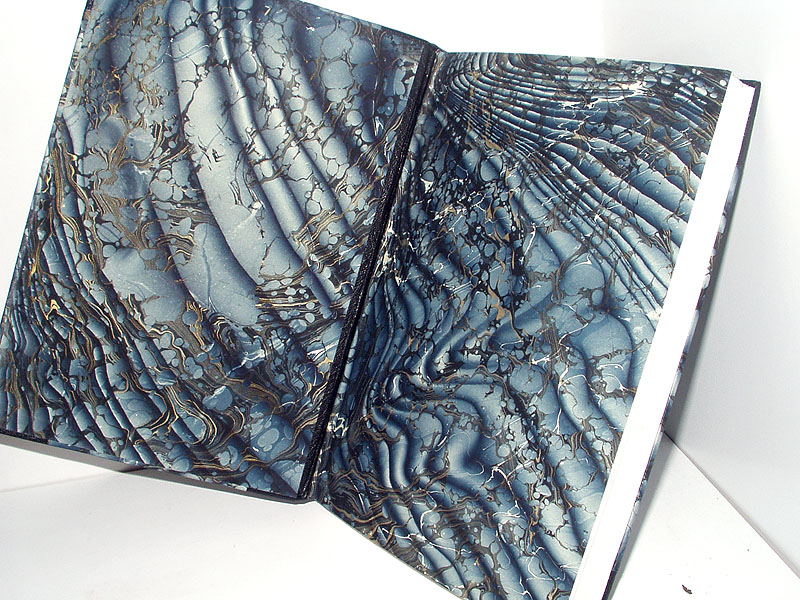 The endpapers as well. The text block was also finished with graphite, as above. I sold this one on eBay for $400. 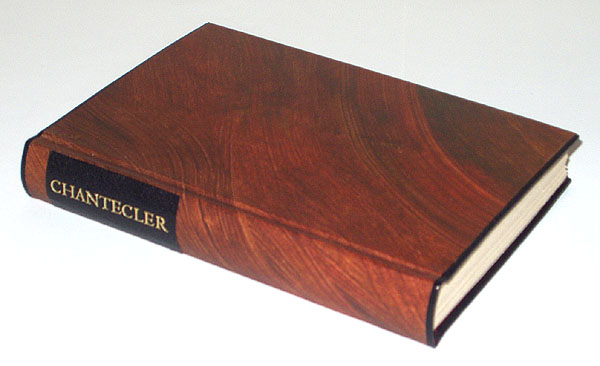 A millimeter binding with my own paste paper, befitting a play about a rooster.

The problem with bookbinding is that the materials (not to mention tools) are really expensive and it’s easy to make tiny mistakes that end up ruining the entire book. There was always too much time and money at stake for me to actually enjoy what I was doing.