The journalist’s uneducated interchanging of “spin”, “weave”, “embroider”, and “seamstress” will give anyone who knows needlework a headache, but it’s still a fascinating read.

I wish she had an apprentice. 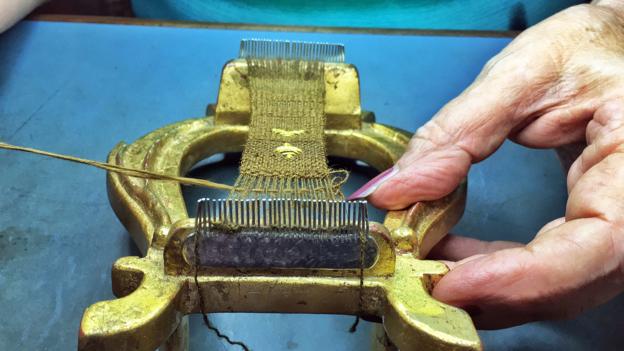 Byssus, or sea silk, is one of the most coveted materials in the world – but after more than 1,000 years in the same matrilineal family tree, this ancient thread may soon unravel.

For the record, ancient references to byssus refer to linen, and only modern ones refer to sea-silk.

Well, that certainly goes with the general textile confusion in the article.

I <3 textiles. This lady is amazing.

I feel that this article did a disservice to the artist.

The videos and pictures are too low resolution to really document the artistry–or even show off the process.

or the British Museum

(and 4k would be a nice bonus, though neither of my exemplars actually use 4k at the moment.)

The terminology was completely and utterly confused – I would not be surprised in the least to learn the journalist can’t even sew a button on, or had never threaded a needle before. I’m sort of resigned to it when it comes to mainstream reporting on anything to do with textiles.

Which is pretty sad, really. Even nudists use towels and bedsheets. We are swathed in textiles nearly our whole lives. Our first introduction to human society comes minutes after birth when we’re swaddled in a blanket. Yet even fashion journalists get the most basic terms and method descriptions incorrect.

ETA: imagine a cooking article confusing boiling with deep-frying with steaming with stewing. Why are textiles any different?

There’s a bit of “magic” to her process,

I recall seeing a documentary on the making of some legendary sword (either Ulfberht or Katana-- can’t recall which), in which the sword is imbued with the warrior spirit by burning human bone at some point. Of course, from a metallurgical perspective, this adds some impurities to the steel which leads to a more desirable blade. Phosphorus, most likely.

I wonder if some of the rituals associated with this craft have a similar effect.

Her process doesn’t sound that dissimilar to turning nettles into a linen-type fabric, except that she needs to rinse the salt out first. I mean, okay, nettles are plants and not clam spit, etc. etc., but clean/soften/separate/spin/weave is a pretty common process.

To me the magical parts are the rarity, the long (but documented!) tradition, and the clam spit. I’ve knitted with yarn made from seaweed extracts, shrimp chiton, and cassette tapes, but clam spit… that’s cool.