The opposite of "reality TV"

We all know what talk shows are like, don’t we: they’ve a fairly rigid formula. Entertainingly witty host, celebrity guests who are all publicising something, laid back chat , then time for the theme music. Or you have the political variant, which has soundbytes, talking heads and arguing about the headlines in easily digestible chunks.

What would it look like if someone did the opposite of all that?

You’d get After Dark.

For 10 years, back in the mid 80s to 90s, the UKs Channel4 (back in the days when it took risks and innovated), found a creative solution to an unusual problem. TV in the UK was just starting to broadcast 24 hours a day, which left them with large blocks of overnight time to fill, which advertisers were reluctant to sponsor. So they came up with a format that turned the discussion show on its head. 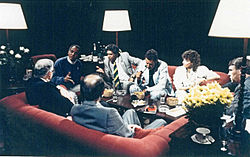 After Dark was a British late-night live discussion programme broadcast on Channel 4 television between 1987 and 1997, and on the BBC in 2003. Roly Keating of the BBC described it as "one of the great television talk formats of all time" and the Daily Mail called it "the most intelligent, thought-provoking and interesting programme ever to have been on television". In 2010 the television trade magazine Broadcast wrote "After Dark defined the first 10 years of Channel 4, just as Big Brother Br...

This little kitty was a little bit too young to appreciate it at the time. This staple of post pub TV ended before I was legally allowed to be purchasing strong beverages, but some episodes are available online, like the one linked below- two and a half hours of in-depth discussion about spying and official secrets in which some seriousl explosive claims are made,on live broadcast.

It’s something tha could only have happened when it did. Today’s media landscape is much more tightly controlled in many ways, and hours of air time of indeterminate length wouldn’t be given over to such a program today. But it should.

It’s still around, it’s called In Our Time With Melvin Bragg.

On his show, he frequently betrays the fact that he has an agenda,

Each show, he has a list of things that he wants to cover-- and quite often, his guests get involved in a tangential discussion. Bragg will try to hurry them up and get the discussion back on his track. You might argue that this what any good host should do. But most hosts will try to disguise that fact on air and very gently guide the discussion back where it “needs” to go. Bragg is brasher.

…the Daily Mail called it “the most intelligent, thought-provoking and interesting programme ever to have been on television”.

The description was doing so well, up until that point…

Yes, well that was an unfortunate selection by the onebox summary. In context, they’re saying how widespread the praise was for the programme. They had a following from a wide swathe of the press, who could not normally be capable of agreeing on much beyond “water is wet”.

It genuinely sounds like something that would be interesting to watch, as a sort of precursor to podcasts and the like. Apart from anything, it would be a great time-capsule for people like us who were too young to have appreciated that sort of discussion at the time.

That said, when the Mail recommends something, I feel duty-bound to despise it with every inch of my being. I’m pretty convinced that if the Mail ran a story tomorrow that read “breathing oxygen is good for you”, I would start holding my breath involuntarily. I mean, they have never yet been on the right side of history, so that must mean that they are playing some kind of angle that I haven’t yet understood: is my consumption of oxygen somehow now an act of fascism? Did Mosley/Hitler/Bannon write some sort of creed about how white people breathing oxygen is bad for Jews, and that’s why they’ve chosen this moment to declare themselves “pro-oxygen”?

In this case, my immediate assumption is that the rambling and unmoderated format of the discussion meant that some of the people who appeared on the show were drunk and racist, and unfortunately weren’t immediately dismissed as such when it happened. I honestly can’t think of any other reason that the Mail would call something “intelligent” and “important” in the same sentence.