A more specific version of the “Underrated or overrated movie” thread. 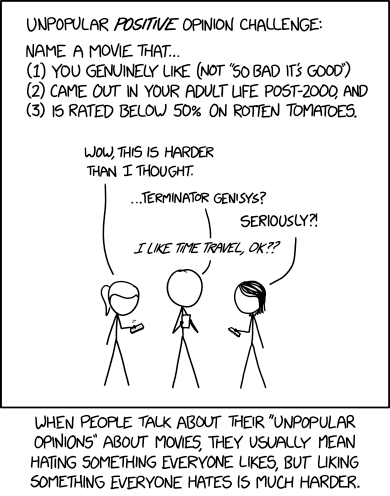 I wasn't a big fan of 3 or Salvation, so I'm trying to resist getting my hopes up too much for Dark Fate, but it's hard. I'm just a sucker for humans and robots traveling through time to try to drive trucks into each other, apparently.

The challenge is to name a movie which:

This is the list I’m using to find my choices, as you can sort by T-meter score.

So far, I’ve come across:

…And that’s about it. Can anyone else find any candidates?

1Terminator: Genisys, the film referenced in the comic, is at 53% Audience score, so I’m assuming the comic is referring to Tomatometer.

I’m a fan of Rowan Atkinson, John Cleese (and many of the other actors), not to mention ensemble comedies in general. I love this movie (and much of the music from it) and bought both the DVD and the soundtrack.

The movie appears to be an homage to “It’s a Mad, Mad, Mad, Mad World,” a movie I have also loved since it first came out.

And not necessarily remembering if it genuinely liked the movie.

Although, I think Miss Congeniality (2000) would count.

Oh, Underworld! I liked that as well!

Shall have to look for others on my list.

I used to watch so many movies long ago and now that it is easier than ever I have almost stopped.

I am not sure I have found one I “genuinely like”, but I remember enjoying the original Resident Evil at the time. And while it was no Silence of the Lambs, Hannibal was fun enough.

Ah, so it’s important to keep it within the last 20 years so that the majority of readers/posters will know what it is. Thanks!

That, and Rotten Tomatoes’ coverage of movies that predate the site and ubiquitous online reviews can be a bit hit and miss.

I used to watch so many movies long ago and now that it is easier than ever I have almost stopped.

Same here. And even fewer in a theater.

I haven’t seen it in a long time, but I remember liking Itty Bitty Titty Committee. I don’t remember enough to know if I can see it now.

So far the ones I’ve looked up have all come back with “Critics Consensus: No consensus yet. Tomatometer Not Yet Available” Well, it’s only been 9-15 years since they came out.

Actually liked Bright. Sure it was flawed, but it had a good Shadowrun feel about it. I particularly liked the evil elves. Critics: 26% Audience: 84%

This is the list I’m using to find my choices

30 Days of Night
Jurassic Park III
The Book of Eli

This isn’t that hard

For example, I’m not a fan of Anchorman, but it’s pretty plain that they weren’t trying to make a good movie. If I actually enjoyed it because it’s trying so hard to be a bad movie, that would be enjoying it for what it is.

On the other hand, Wild Wild West is supposed to be a film about these two cool guys who take down this awesome mechanical spider… and everyone in the film just comes across as so pathetic that it kind of loops back around to amusing. I don’t laugh because the insults that West and Loveless are lobbing at each other: those are cringe-worthy. But the fact that they get into such a pathetic insult-off is, in itself, amusing. I’m not enjoying it because of what they were trying to do; I’m enjoying it in spite of what they were trying to do.

Hmm, I’ll go with Repo! The Genetic Opera. I wouldn’t have thought it was so unpopular with critics (38%) but that may just be the influence of the crowd I tend to hang with, who bloody love it

I love that movie! Sure, it’s flawed, the plot doesn’t flow very smoothly from one scene to the next, and its blend of horror and rock opera is probably too gruesome for some tastes. But the songs are amazing, and the cast is top-notch. (I’d happily pay to hear Anthony Head sing pages from the phone book, and he’d do it well, too.)

One of these days I’m going to give myself a treat and track down Devil’s Carnival, the not-a-sequel follow-up. I’m probably going to love that one too.

Okay, so from that list I genuinely like (from after 2000):
Mars Attacks!
Riding in Cars with Boys (that got a low rating???)
Creation
Kate and Leopold (sorely underrated)
Bobby