However, most of the music I’m listening to at the moment is old revolutionary folkie stuff. And I’m aware that some people use the music threads as a respite from the craziness of the world, so I’ve been trying not to spread my political obsessions where it might be unwelcome.

But there’s helluva lot of good protest music out there, and it’s needed now more than ever.

If you feel like it, add some discussion about why you like it, who wrote it, what situation it’s suited to, why you think it might be problematic, etc etc. 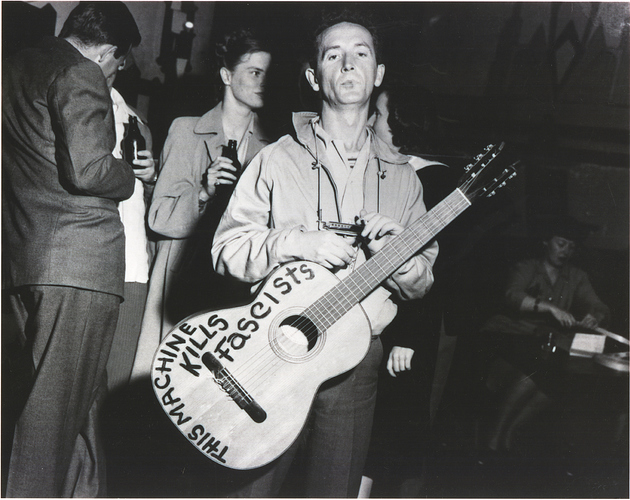 May as well kick it off with the one I’ve been spamming for months.

The history they teach is the voice of the victor
You need to look again you need to have a propaganda!
If truth is your price then come join the bounty hunters
Because truth make you the enemy of all these liars

A bit distant from today, although still relevant. Catchy chorus.

A bit distant from today, although still relevant.

A bit distant from today, although still relevant.

Although I love a bit of Seeger…

…I’ve always had a thing for the Bragg version of Which side are you on?

“This song is Copyrighted in U.S., under Seal of Copyright # 154085, for a period of 28 years, and anybody caught singin it without our permission, will be mighty good friends of ourn, cause we don’t give a dern. Publish it. Write it. Sing it. Swing to it. Yodel it. We wrote it, that’s all we wanted to do.”

I think I played my CD until it scratched. I’ve chilled out a lot since 1990.

speaking of Phil Ochs and Billy Bragg, this must be posted:

i love the entire album it’s from, The Internationale, but this live version is great for many reasons:

You’ll have me cracking out the real Tankie stuff if this keeps up.

A little CanCon for the board

“It Could Happen To You”

Oh my heart is sinking
Same old useless, worn out thinking
You live your life in the court of kings
Bow to the ruler and kiss the ring
But we don’t even understand a thing you say

Well, Oh my heart is sinking
The same old useless, worn out thinking
You live your life in the court of kings
Count your money as the raven sings
Safe and sound when the wrecking ball swings
But all your riches won’t mean a thing someday

i’ve never heard that one before. so good!

I could select just about the whole Manics back catalogue, but let’s stick with the obvious one for now

and let’s have some PWEI too

I was on a months long canoe trip during the 2008 market crash & emerged from the river into a different world, so this pretty obscure song (released ~2010?) has always resonated with me. Can’t find the original, more pared down version with the It’s a Wonderful Life samples though.

Another Guthrie song. This version is my favourite. Never more relevant.

"Deportee (Plane Wreck at Los Gatos)" is a protest song with lyrics by Woody Guthrie and music by Martin Hoffman detailing the January 28, 1948 crash of a plane near Los Gatos Canyon, 20 miles (32 km) west of Coalinga in Fresno County, California, United States. The crash occurred in Los Gatos Canyon and not in the town of Los Gatos itself, which is in Santa Clara County, approximately 150 miles away. Guthrie was inspired to write the song by what he considered the racist mistreatment of The ge...

Is there a link to go with the lyrics? I just see a blank space.