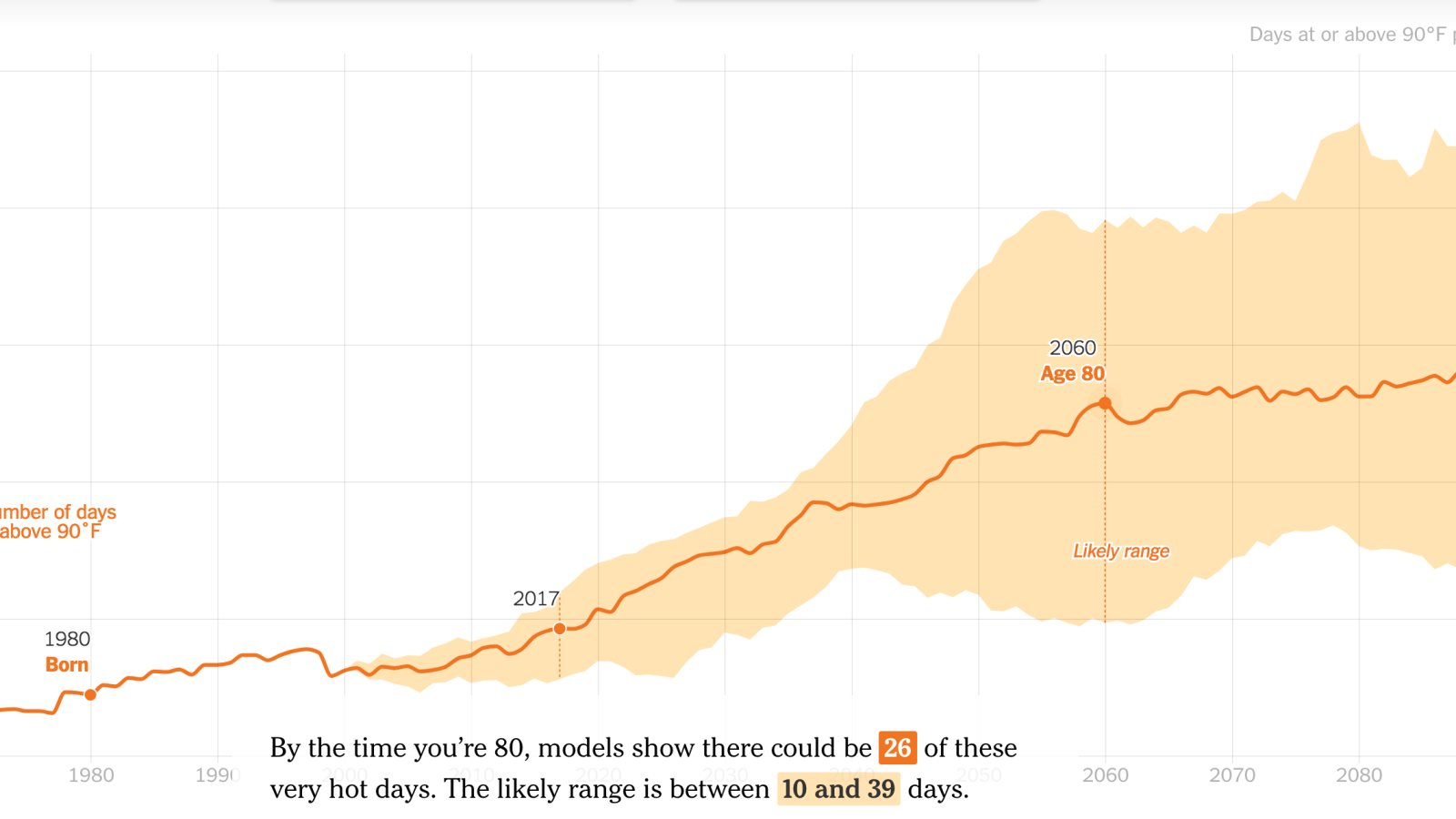 You’re not imagining it: there really are more sweltering-hot days in most cities than when you were growing up. A new tool from the New York Times shows you exactly how your hometown’s climate has changed since you were born.

Another fascinating tool from the New York Times.

Mine says that there were an average of 5 comfortably warm days per year when I was born, it’s currently still 5, but by the time I’m 80 there could be two whole weeks of comfortably warm weather. Hopefully I’ll move somewhere warmer before then, I don’t want to have to wait that long for that little warmth.

How do you get it to display “comfortably hot” days? Mine is stuck on evil death days from Hell, where the sun is like the coals of a barbecue and the ground is the lid keeping the heat in and attempting to broil the flesh from your bones like so many spare ribs.

IDK, when I looked at it it was all about days in the 90-100°F range which is precisely where normal human body temperature lies. Lukewarm, where minimal energy (internal or external) is needed for heating or cooling, therefore the most comfortable possible. Exactly what we evolved for.

It doesn’t account for humidity though, which could make a big difference.

2500 kCal is about 120 Watts of energy that we are constantly putting off just doing our daily thing.

I don’t know if you’ve ever touched a 100 Watt incandescent lightbulb, but they put off quite a bit of heat.

A human in 37°C at 100% relative humidity will overheat almost immediately, even at complete rest, even though that’s normal human body temperature, because they will have no way to shed the excess heat that their body is producing.

Anything above 25°C I find markedly unpleasant, even at low humidity, as my body finds itself having trouble transferring the heat its normal metabolic processes create into the surrounding atmosphere. If I’m going to actually be physically active outside, I’d prefer it somewhere in the 15-20°C range, to easily shed the extra Wattage I’m burning through exercise.

32°C, even in low humidity, even in a period of low activity, in the shade, is hot enough that I need to be constantly drinking litres of water just to keep myself cool through perspiration.

So, yeah. I’m not buying the “mid-thirties is the temperature where the human body needs the lowest amount of energy to maintain its normal internal body temperature” idea. We’re a 120- Watt light bulb, and we’re not even shedding much of that energy as light. That excess energy needs to go somewhere.

We’re a 120- Watt light bulb, and we’re not even shedding much of that energy as light. That excess energy needs to go somewhere .

Good point. Hmm. I haven’t done conversions like that in ages. But reasoning ~104 kCal per hour spread across 1.8m² average surface area that would be something like 0.58 kCal per cm² per hour?

It was over 90 degrees and very humid today in NYC, and just by chance I happened to watch a very appropriate episode of the Twilight Zone called “the Midnigt Sun.”

The word that Mrs. Bronson is unable to put into the hot, still, sodden air is ‘doomed,’ because the people you’ve just seen have been handed a death sentence. One month ago, the Earth suddenly changed its elliptical orbit and in doing so began to follow a path which gradually, moment by moment, day by day, took it closer to the sun. And all of man’s little devices to stir up the air are now no longer luxuries—they happen to be pitiful and panicky keys to survival. The time is five minutes to twelve, midnight. There is no more darkness. The place is New York City and this is the eve of the end, because even at midnight it’s high noon, the hottest day in history, and you’re about to spend it in the Twilight Zone.

Edit — I should point out the episode is about increasing temperatures and diminishing resouces.

the most comfortable possible

The thermoneutral zone describes a range of temperatures of the immediate environment in which a standard healthy adult can maintain normal body temperature without needing to use energy above and beyond normal basal metabolic rate. Its value is 25 - 30 degrees Celsius (77 - 86 degrees Fahrenheit) for a naked man, standing upright, in still air. Note this is for a resting human and does not allow for shivering, sweating or exercising.

Both OSHA and The American College of Sports Medicine have recommendations. IFA has developed the following along those guidelines: The aerobics, cardio, weight training and Pilates areas should be at about 65 to 68 degrees. Yoga areas should be somewhat warmer at no higher than 80 degrees. Pool areas should be in the 70 to 80 range.