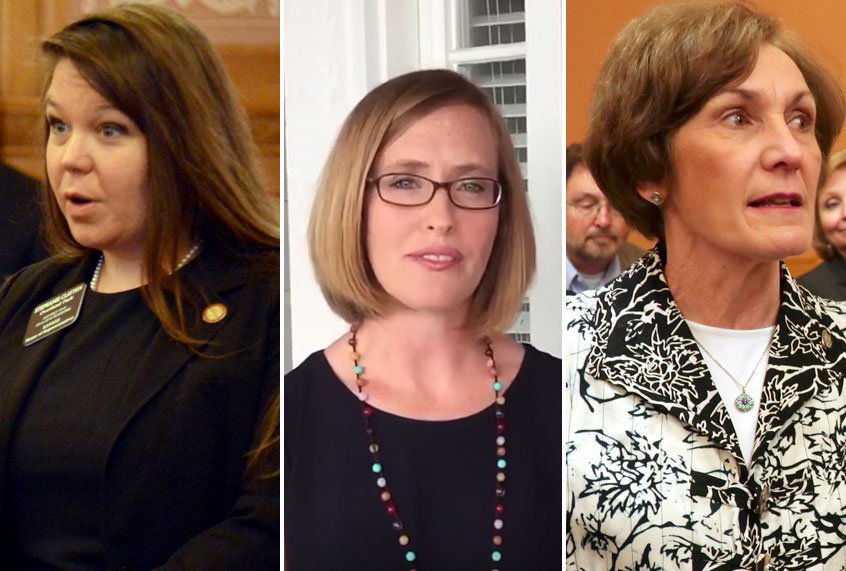 Three Kansas state legislators, all women, bail on the Republican Party in the same week. Now comes the deluge?

Kansas seems to be experiencing its own little blue wave, in a somewhat unexpected way. It’s odd to me that it took them so long to realize that their party had abandoned them, but better late than never, I suppose.

I’m surprised that they supported the TGOP at all considering they are women.

Sometimes it takes a long time to figure out they’re not including you when you include yourself.

Having grown up in Kansas, I know the Republican tomfoolery has been going on longer than these women have been in office.
I suspect less “enough is enough”, and think more that these might be post-midterm job-extending manouvers.

Yup. Now that the R brand is tainted, it’s time to take over the D party and nail its feet to the far-right floor just short of what Kansans will stomach. Mussolini more than Pinochet.

I suspect less “enough is enough”, and think more that these might be post-midterm job-extending manouvers.

I suppose it’s possible they’ve had genuine changes of heart, but I’m doubtful.

Kansas is a pretty red state, so it’s perhaps not surprising that it’s often “moderates” vs. wingnuts, rather than dem vs. gop, and you might think that at least some moderates are actually crypto-dems practical enough to get elected, but that thought would be a mistake. There really is just some sort of weird streak in Kansans that makes people more conservative than you’d expect.

And to me, in this case, it just feels like the reasons they’re citing for making the switch are nothing new, or are even and/or actually core precepts of the party.

I suppose at the end of the day, I just can’t trust someone who says (as quoted in the article) “I have been a proud Republican my entire life,” but is feckless enough to just switch parties when the going gets a little rough. I mean… It seems to me, that if you had realized genuine moral objections to the positions of your compatriots, then you might not only question your future path, you might also acknowledge the heinous nature of your past actions and be inclined to reflect on them in private. In other words, if you actually felt bad about it, you’d try to make amends. And I don’t see that. Instead I see, “red team’s kinda suckin’ lately, I think I’ll switch to blue team.”

Look at it this way: these are people who were apparently happy enough to share a party with Sam Brownback, as he drove the KS economy into the ground (and presaged some of the shenanigans the GOP would soon pull at the national level), as well as Kris-fucking-Kobach, a well-known shitheel from way back in the day.

OTOH, what do I know? It’s possible the party might have moved enough to leave them behind; the overton window is a thing, after all.

not to be a total downer, but maybe it could signify how far right the democrats have become.

if you except social issues, pretty much the fiscal polices of democrats now are the republican policies of the 80s.

at the very least, democrat leadership isn’t presenting an an alternative world view.

Of course the Democrats are far right.

That’s why I vote third party. It usually doesn’t matter who wins, because the two major parties are (or rather, were) too close together for it to matter, so I vote my conscience.

However I’m noticing a disturbing trend, where these far right DINO Democrats are retiring or being unseated, and their seats are going to legit fucking fascists. I’ve gone from a third party voter to a Democrat in practice …

… at least until the Democrats embrace fascism and it doesn’t matter which fascist wins.