Three young girls could use some help

OK, here I go again…but first a bit of backstory.

When I first came to Tijuana, I was staying at the Sombrero Hotel off Blvd. Agua Caliente where I met my first friend, Martin, who was working as the maintenance manager there. After a couple of weeks, he invited me to stay at his place until I could find an apartment, because he didn’t want me to waste my money on a hotel room for so long. By now, I’ve been witness to him gaining a beautiful and kind girlfriend, Cecy, and her two boys, Axel and Gael.
Martin has a good friend of many years, Fidel, who comes from El Paso, TX. He’s a good dude, and very loyal to Martin.

Anyway, Fidel had some business to conduct in the city of Mexicali, a fairly straight shot east of Tijuana, and he invited Martin along, because Martin had some family there he hadn’t seen in many, many years…his aunt and his cousin. I think it was meant to be a surprise visit.
Martin and Fidel invited me along, because I don’t drink much and could act as designated driver, and see some parts of Mexico I hadn’t seen yet. Cecy, Axel, Gael and Cecy’s first cousin came along, too. Anyway, after business was done (checking out a house meant to repay a debt), we went over to Martin’s family’s house for a tearful reunion.

Alright, cutting to the chase…

Martin’s cousin has three daughters, roughly 12, 8, and 3 or 4 years of age (and from appearances, maybe one on the way?). All cute and polite, and very sweet.
Friends, I saw a level of poverty there I hadn’t run across in a long time. They live in a little house with a dirt yard, dogs running around, with many things in an obvious state of disrepair. Apparently, the aunt is retirement age, so the daughter’s husband appears to be supporting everyone…his wife, her daughters, the aunt, and her good-for-nothing husband.
When we arrived, they offered us some Coke, bringing the dining room table and chairs outside to the yard.
This dining room table consists of a large piece of weathered plywood supported by planks. The chairs were random, one of them a bank of chairs like you see in municipal buildings or bus stations, three together. The daughters appear to own nothing but summer clothes, even with a long winter season like we’ve had this year. They were riding around on bicycles that had no tires, just rims. Despite it all, the kids seem pretty happy.
We offered to grab some dinner for the evening, taking the aunt with us for directions, and grabbed some pollo asado, some breads for the family to eat for the week, and various other things. It was both heartwarming and heartbreaking to see the looks on the kids faces, because I think it was the biggest spread they’d ever seen at one time. Granted, there were a lot of us there.

To sum it up, I want to get these girls some help. I myself want to first get them some tires and inner tubes for the girl’s bikes, with some Slime and some Tuffy liners to prevent punctures. I have already asked around my apartment complex to see if anyone has some kid’s clothing to fit them, but I think it would be nice if they could have a few new items also. Jackets and sweaters and long pants especially for the next winter.
I have the idea of scouting for used furniture in San Diego, probably renting this local guy’s kid and his van for 50 bucks for a day to help me check out curb alerts or maybe grab a few items from furniture resellers here in Tijuana.

Does anyone want to contribute to this effort?

I’d like to help but I’m so broke right now, I can only just pay my rent and credit cards are just about maxed out (only food, bills and other necessities go on them). Anyway. Long-winded way of saying please remind me of these three girls about July and I’ll see what I can do then.

People here know I’m not a top earner due to my career choice of being a painter, but man, I’ve never seen a kid so determined to ride a bike that they’d do it without tires. Getting them some good rubber is first on my list.
Hand-me-down clothing is readily available here in TJ, but I am of the opinion that any kid deserves at least one nice outfit every year or so if they can get one.

What was really touching was when they used their cell to call Martin’s mom in California to Skype with her, and she told me that Martin talks about me all the time. I’m just trying to be a good dude, but it’s nice to hear that I touch people’s lives in some way or another.

ETA: It was also really cute to see the girls trying to teach Gael how to ride a bicycle. Martin and Cecy live right on a busy street here in TJ, so the kids don’t have a place to run wild, especially on a bike.

I’m texting Cecy right now to see if it’s cool to come over this afternoon, and I’ll see if anyone got photos of the girls that I can post for ya’ll.

If anyone has suggestions for how to find quality stuff for cheap, I’m open to advice. Clothes are very inexpensive here, as it’s usually stuff that trickled down through stores like Marshall’s and Ross, I think.
I think I’ll see if I’m still registered on Freecycle, too (for furniture). You’d be amazed at all the decent stuff that gets thrown out in San Diego.

Okay, I got it all figured out. It’s the female cousin’s husband who’s no good. The other guy is her brother. Apparently, what happens is the aunt, the brother, and the sister all work and pool their money to take care of the family. But if the husband gets a whiff of any cash, he steals it or beats her and takes it and goes out to drink it away, leaving nothing for the care of the kids. (edit: This is the first time Martin has seen his aunt and cousin in 15 years. If he knew what was going on, he’d have done something about it sooner)
She wants to leave him, but is not sure where to go.

Martin has just got a line on a three bedroom house here in TJ, and would invite all but the husband to come here, but they don’t have a solid plan worked out yet. No matter what happens, the girls need some aid, and at the very least, Martin and I will take the stuff to her and take the girls clothes shopping when we get there so the asshole can’t take any cash from them.

Martin has called the brother to get the rim measurements of the bicycles for me, and to ask him to take some photos of the girls to send to us.

Okay, here’s some photos, in order of age. My goodness, the youngest one is so precious. She’s a sweetie.
Keep in mind not all of Mexicali looks like this. This is just a poor neighborhood.
Griselda, 11 yrs. Isabel, 8 yrs. Zera, 4 yrs. 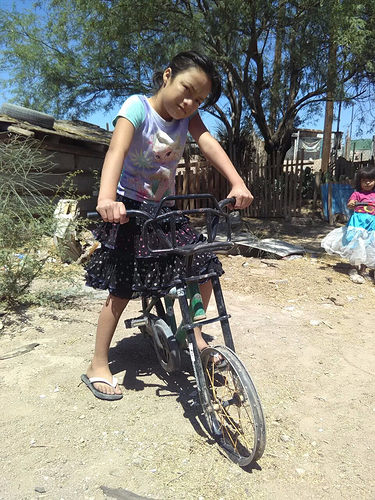 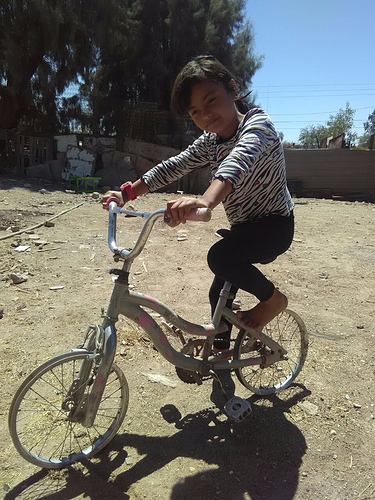 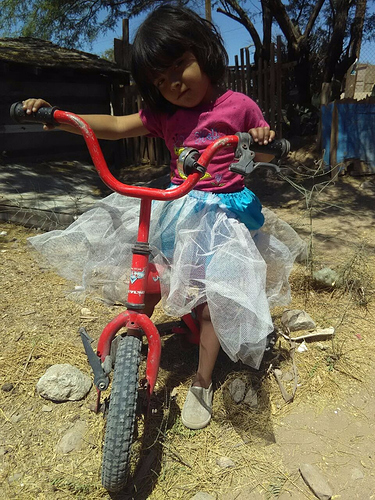