Today I learned a thing

This weekend I learned that you can apply toner instead of hair dye to cover gray hair, and that it doesn’t damage hair the way dying it does, and also gives it extra body and shine. It won’t totally cover the gray but blends it in if your gray is kind of blendy anyway.

I’ve had toners applied before after hair color, but never just done it instead of dye. My stylist put it on dry and left it for 20 minutes. I was surprised at how strong the color was; much more than I was expecting. It was way cheaper too.

I really did think you were talking about a laser printer toner, and was going wtf? before I realized it was probably something in the health and beauty department!

I learned this week that I can enjoy a short story even if I can’t follow the plot, by paying attention to the setting, characters, and style. As someone who is VERY plot oriented, this is kind of a revelation. Not that it is possible, but that I might be able to enjoy it this way. 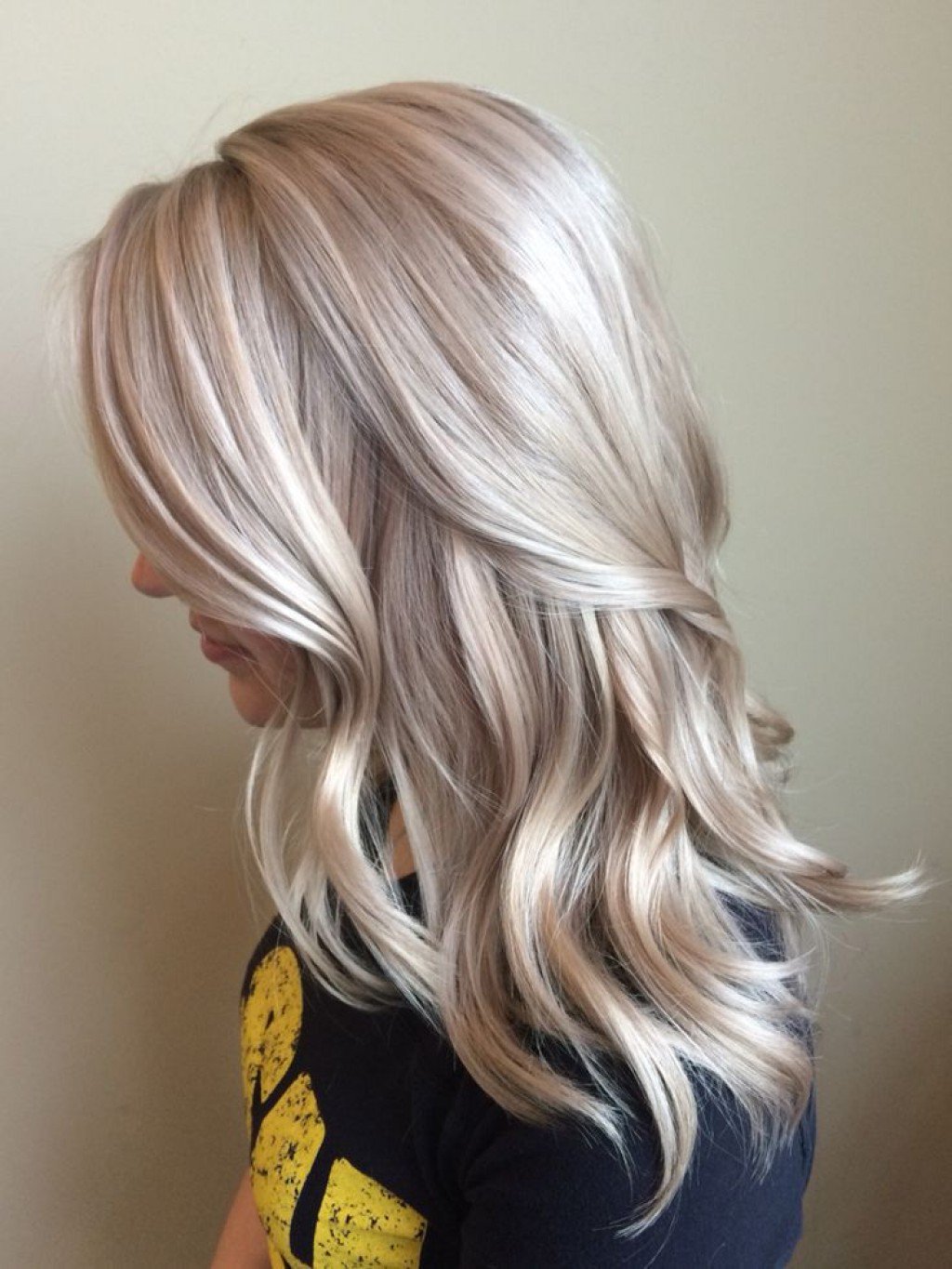 DIY Hair: What Is Toner, and How Does It Work?

Let's dive into the world of hair toner—how you can achieve the proper blonde, minus brassy orange and yellow tones?

Ah, that explains it. Is that what they used to call “bluing” that older women used to use? 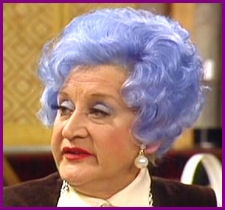 Not sure how that shade is accomplished exactly. Perhaps someone here knows. I suspect it is the purple to cover gray trick but I don’t know enough about how that age group does their hair to understand it.

I really did think you were talking about a laser printer toner, and was going wtf? before I realized it was probably something in the health and beauty department!

So did I; I was like, “but how do you get it to bond to the hair?” And from there I got to thinking of using balloons to positively charge the hair, and a hair dryer as a fuser…

But, yeah, now looking up “hair toner,” it makes so much more sense.

I learned this week that I can enjoy a short story even if I can’t follow the plot, by paying attention to the setting, characters, and style. As someone who is VERY plot oriented, this is kind of a revelation. Not that it is possible, but that I might be able to enjoy it this way.

Try examining the theme, too. You can usually get some clues about the author’s viewpoint by looking at how the central characters act, and what consequences befall them. For an example, in A Song of Ice and Fire, Ned Stark clings stubbornly and, to some extent, stupidly, to his ideals of honour, and gets beheaded and his family gets scattered to the winds for it. However, when you look at what happens to the Lannisters (especially Cersei) with all of their conniving, being beheaded might have been the kinder option. I have a feeling, in the end of the series, that the winners will be those who treat their allies with honour and their foes mercilessly, which says a lot about how GRRM sees the world (or, at least, that time period).

For a contrast, look at the confrontation between Loki and Thor in Thor: Ragnarok. Thor has been betrayed by Loki at every opportunity over the course of three films, and so when he does it again, no one, not even Thor, is surprised. But Thor defeats Loki, forgives him for everything, gives a kick-ass speech about how a god of mischief should never be predictable, and then lets him go without further punishment. And then Loki comes back at the end of the film to save the day. It’s almost a direct refutation to the world-view of ASoIaF.

So, that’s something else to look for when the plot is inpenetrable.

Yesterday I learned that boot warmers are the best thing ever when standing around for hours on a snow-covered hill. I’ve done race duty in the past (standing around in position to help ski racers if they get injured), and previously, I had to spend that time jogging up and down the hill in order to keep my feet warm. Letting electricity do the work for me is very much preferable (and more effective, to boot1)!

1I’d say “No pun intended,” but there’s no fun in telling lies that no one will believe.

The Are you being served lady’s hair was likely Manic Panic. If you leave it on a shorter time than the instructions say, the color comes out pastel. Alternately, if applied to a wig at full strength, you just shampoo it a bunch of times to get to the desired shade.

Thanks for posting the toning article. I don’t want to go to full-on hair dying, but the greys (white, really) are multiplying. Sounds like good old Wella will be the way for me to go.

I kinda love this answer set.

Why do old women dye their hair blue

If it was so tabboo at first for people to dye their hair outrageous colors, why have old women been dying their grey hair blue for several decades and why was it accepted? Besides, it looks ridiculous.

I’m glad it helped you @IronEdithKidd; honestly, we have been fighting my hair breaking and being dried out to the point that I decided gray was better than damage, but then I have an event to go to and my grays were tots depressing me, so I asked if she would just do the toner (which we had discussed as an option when I stopped dying) and now I’m like - WHY DID WE NOT DISCUSS THIS SO MUCH EARLIER???

My SO had a couple gray hairs as a baby. Needless to say they multiplied and early too. She’s never died her hair, and is fine with it as is (as am I). (Very curly too, which compensates maybe?).

Huh. Somewhere in my travels I saw an ad Salvador Dali had been involved with. The headline was “this young grey head” and it advertised products to go with the trend of dyeing grey or light blonde hair blue, pink, or lavender.

I think it’s one of those trends wits just a long enough period that every time it comes around, people think it’s brand new. 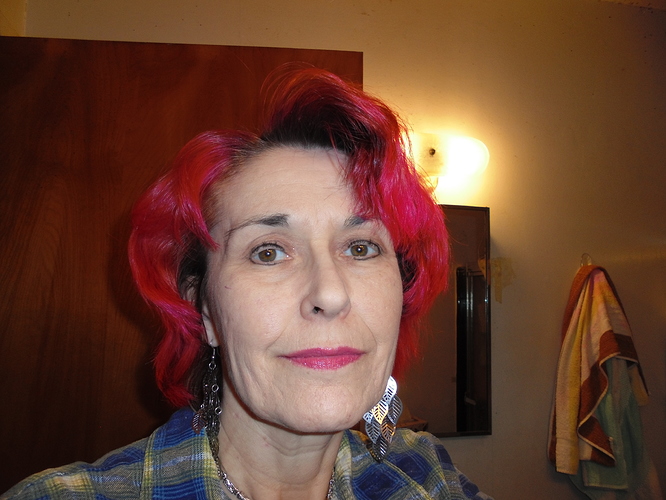 DSC01652.JPG3258×2443 2.9 MB
Forgive what I perceive as a simpering smile; I’m dreadfully nearsighted. Anyhow, it’s washed out to a lighter pink. SPLAT was what I got. I used a highlighting cap and tried to pull hair strands through as many holes as I could reach before applying the lightening solution.
9 Likes
teknocholer March 5, 2018, 8:35pm #13

I don’t know if blue hair was always the intended result. People have used laundry bluing for a long time to make discoloured white fabric look white again, and using it on hair is, or used to be, common. 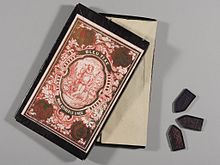 Bluing, laundry blue, dolly blue or washing blue is a household product used to improve the appearance of textiles, especially white fabrics. Used during laundering, it adds a trace of blue dye (often synthetic ultramarine, sometimes Prussian blue) to the fabric. White fabrics acquire a slight color cast after use (usually grey or yellow). Since blue and yellow are complementary colors in the subtractive color model of color perception, adding a trace of blue color to the slightly off-white colo...

My father had thick white hair all his adult life. As he got older, it would get yellow-looking. Someone must have told him about laundry bluing, because he started to wash his hair with it, and it brought his hair back to a brilliant white. As I remember it, it came in little cubes that looked like pool cue chalk.

All the instructions warn about using too much, which will dye everything blue. It’s easy to see how a little too much could result in blue hair.

That’s exactly it: adding blue to white makes it much brighter and ‘cleaner’ looking.

You can cheat (wait, 21st century-speak: hack) by putting your whites in with a pair of dark jeans to try it yourself.

You can still buy it. I use it.

It’s why a lot of detergent is blue, to evoke the effect of bluing.

Yes, blue or purple is used to get rid of brassy tones or yellowing on gray. It’s harder to misuse modern toner but it was easier to over do it with past products/techniques leading to little old ladies with blue hair, although that character is a wild exaggeration.

I happened to catch a video recently where the hair dresser was using the rose gold toner they mention in this article. He pulled out a book of hair swatches showing how the different toners affect hair at different levels of blond.

The Are you being served lady’s hair was likely Manic Panic.

Manic Panic wasn’t founded until 1977, so Are You Being Served certainly predates them.

Jhirmack still exists and has a Jhirmack Silver that has a purple tone. I use it. It’s very affordable

For Gray, Blonde, Bleached Or Highlighted Hair With Natural Anti-Aging Properties Neutralizes Brassy, Yellow Tones Boosts Texture And Softness. Our goal is to keep the online nutrition information up- ...

I grew up around little old ladies - there were at least five on my block in the early 1970s - so, yeah, lol.

I think in the UK, the varied colors have a theatrical sort of beginning, combined with “ladies of a certain age”?