Twitch streamer Philosophytube (and a few of his friends) are doing a live reading of Shakespeare’s works to raise funds for the Samaritans charity. Samaritans is a help line for people in emotional distress. In about 24 hours, they’ve managed to raise over $42,000… and there are still plenty of plays to perform!

I wish I’d heard about this sooner… it’s so much fun to listen to as I go about my day.

(Thanks @tinoesroho for the retweet that got me hooked!)

Olly is the best and his stream is a constant delight.

It’s been interesting. I’m hearing some plays I’ve never read before (Timon of Athens is up now.) And it’s great how Olly throws in little bits of info and interpretation for modern audiences. (I never would have thought to subtitle Measure For Measure “All’s Well for Incel.”

The time difference is a problem, with him on London time and me on EDT. I’m really hoping I can catch Twelfth Night, it’s one of my favorites.

For anyone who loves the Scottish play, it will be up after the one they’re doing now (Julius Caesar.) That’s probably about two-three hours from now.

Hamlet should be starting any minute now, and the participants are hinting that a professional actor will be guest starring.

I’m sorry, but I need to shout about this: 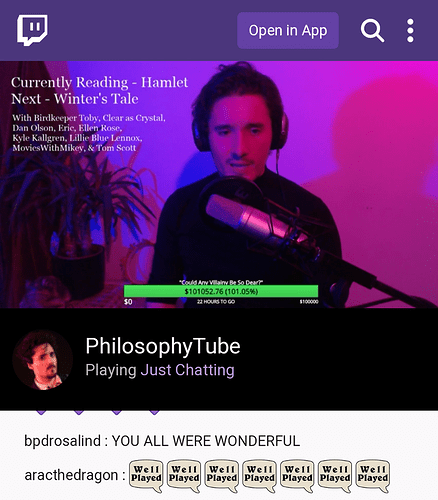 Yeah, I’m kind of obsessed. But this hits home in several ways. One, my parents exposed me to Shakespeare at a young age (that sounds so wrong somehow) so I’ve always been fond of it. I only wish I could have shared this stream with them. And it’s for the Samaritans… I’ve called them. They helped me. So it’s a cause I can appreciate. Plus, it’s been a sheer pleasure watching the performances… not all of the performers are practiced actors, but they’re giving it their all and having loads of fun doing it. (I so wanted to be an actor when I was a young thing… I had neither the talent nor the ambition required. But I still get a thrill out of seeing actors do their thing.) I wanted to cry as the counter hit $100,000 during the last minutes of Hamlet. What a victory… and it doesn’t end until tomorrow night!

Okay, probably my last update on the topic…

Well… it’s over, and what a ride. The Tempest was terrific, though I kept getting distracted by spam phone calls and the Twitch chat stream.

This is the last view: 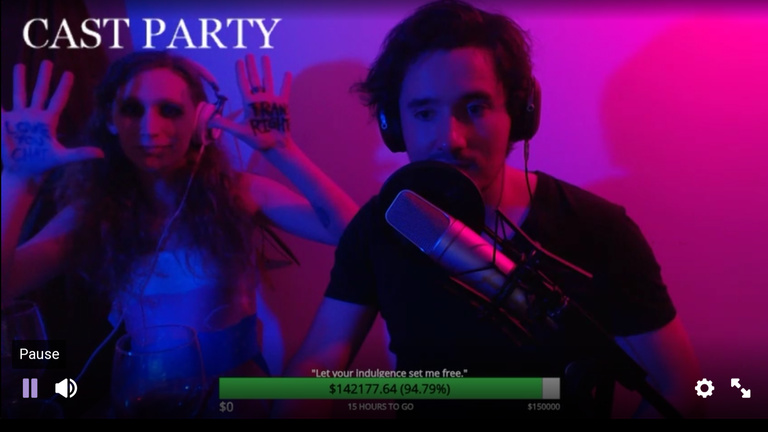 In case it isn’t clear (I was streaming at 480p to minimize buffering issues), the final totals appear to be… (drum roll)… $142,177.64. It was announced during chat that each call the Samaritans answer takes about $5. This will pay for a ton of calls…

It’s also entirely possible that the on-screen bar was slow and that isn’t the end total, but I can’t be sure. I know on-screen acknowledgements of pledges were running at least 45 minutes slow, because the donations were coming in so fast and furious at the end. Or maybe I’m just hoping the last stretch goal of $150K was met… but I don’t think it got there. Even so, it was still a wonderful achievement and an amazing thing to witness. All the performers were tired, but incredibly happy.

And then they did a “raid,” which means they transferred the whole Shakespeare Chat Gang into another person’s chat. I don’t know how many of us were still there at that point but I’m guessing 2000-3000 viewers suddenly invaded Nikatene’s videogame stream. She was astonished! I didn’t stay long, I had to go and do all the things I’ve been putting off all day to watch Shakespeare… but it was happy chaos while I was there. 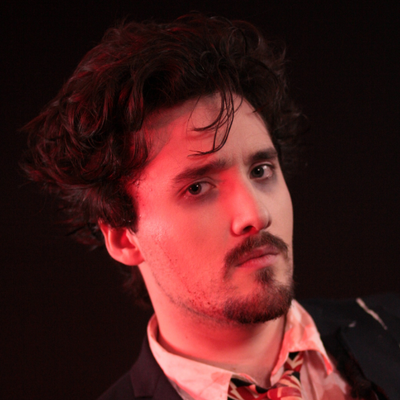 I have to manually accept every single payment on PayPal, which will take some days. When it’s done I’ll post the grand total; till then I don’t actually know what it is!
4 Likes
Nightflyer August 31, 2019, 12:41am #9

Last update on this, I think:

(btw if you're wondering why that's less than the on-screen amount it's because the cash was donated in dozens of currencies, displayed roughly in dollars, and has been converted to £, for which Paypal charged currency conversion fees)

It’s crap that PayPal took out a chunk, but it’s still an incredible total, and truly something for cast and crew to be proud of.

(And it’s also an achievement that we have the totals so soon. Olly had to manually accept each and every donation, probably thousands of them; it couldn’t be automated because every few transactions he had to input a captcha. PayPal isn’t set up for something like this.)