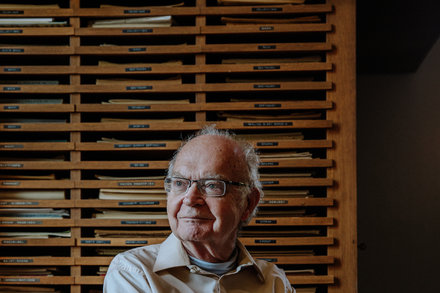 The Yoda of Silicon Valley

Donald Knuth, master of algorithms, reflects on 50 years of his opus-in-progress, “The Art of Computer Programming.”

Have you ever read (or tried to read) any of those? I haven’t, nor do I know anyone who has; they sound interesting (in a fundamentals sort of way), so I’m always curious when the topic comes up.

At age 19, Dr. Knuth published his first technical paper, “The Potrzebie System of Weights and Measures,” in Mad magazine.

That just tickled me no end.

It’s been quite a while. All the assembly stuff is supposed to have changed to RISC. I want to pick up a digital copy of the set but it’s not available outside of Amazon—that I can find.

His website seems to point to here for ebooks, but I can’t quite tell if that site is currently publishing what he initially referenced on his site, or not (he seems to have some concerns with Kindle and epub). In any case, they aren’t cheap, especially for ebooks.

On a more positive note (for me, at least), I discovered that they’re available on Safari Books Online. I have a subscription via my employer, so I can read (but not download, alas).

I read the preface and was struck by this bit about the what he considered prerequisites, especially in comparison to the reputation of these books.

These four prerequisites can perhaps be summed up into the single requirement that the reader should have already written and tested at least, say, four programs for at least one computer.

And then the preface to the third edition starts with this bombshell:

After having spent ten years developing the TeX and METAFONT systems for computer typesetting, I am now able to fulfill the dream that I had when I began that work, by applying those systems to The Art of Computer Programming.

Basically, dude spent ten freaking years tweaking the formatting and layout of his magnum opus. And of course he had to build his own typesetting software utility to make sure it was just like he liked it. I’ve indulged in my fair share of yak shaving, but this is just epic!

Then chapter one starts with an epigraph that quotes Ada Lovelace and Epictetus, and I am officially charmed by this book.

Practice yourself, for heaven’s sake, in little things;
and thence proceed to greater.

I am also probably smoking crack if I think I’m actually going to make the time to make any real progress on this book (there are so many other more practical things I should be studying), but it’s definitely moved up the rankings in my “to be read” list.

I forgot about Safari. Going to check that out again.