White nationalists getting upset over their ancestry test results

Mostly just a link now for discussion, because I need to get to sleep. But this has been an area of interest to me. 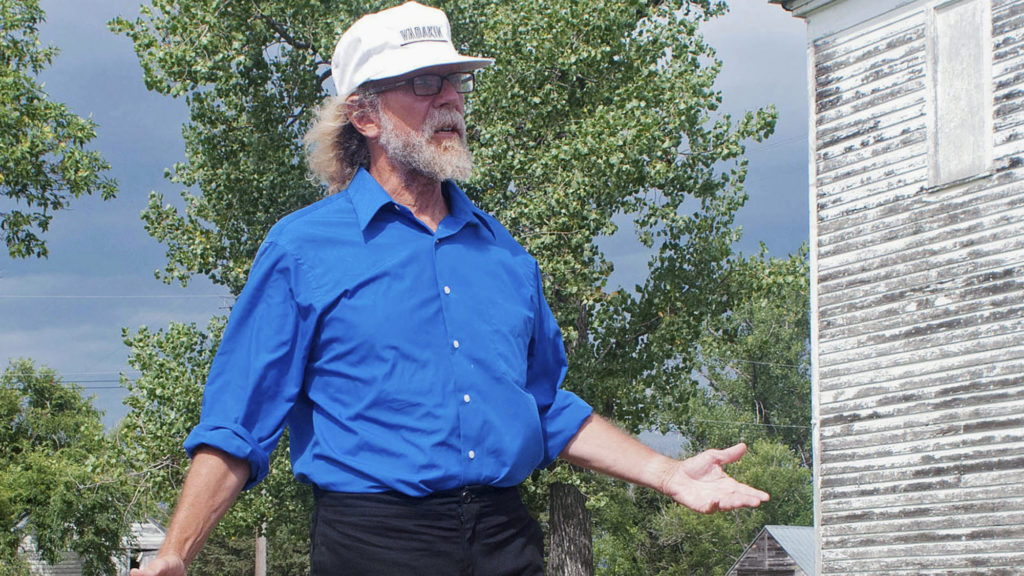 White nationalists flock to genetic ancestry tests. Some don't like the result

With the rise of spit-in-a-cup genetic testing, there's a trend of white nationalists using these services to prove their racial identity.

Yuuup. Welcome to life in The Americas! I bet that most of the yahoos concerned have never even seen the Europe that they wax so eloquently about.

The only thing that would be embarrassing would be finding out I was related to Richard Spencer. On the other hand, if I were, I’d have an excuse to punch him during a family reunion.

Not even smart enough to lie. :Sigh:

Unless it’s on my Jewish side. Then it would be totally worth it.

They’re not even smart enough to realize that those lines on the map mean practically nothing, haven’t always meant what they mean now, and have been crossed back and forth for millennia.

Yuuup. Welcome to life in The Americas! I bet that most of the yahoos concerned have never even seen the Europe that they wax so eloquently about.

They’re not even smart enough to realize that those lines on the map mean practically nothing, haven’t always meant what they mean now, and have been crossed back and forth for millennia.

Now don’t bring facts to this!!!

This paper considers the emergence of new forms of race-making using a qualitative analysis of online discussions of individuals’ genetic ancestry test (GAT) results on the white nationalist website Stormfront. Seeking genetic confirmation of personal identities, white nationalists often confront information they consider evidence of non-white or non-European ancestry. Despite their essentialist views of race, much less than using the information to police individuals’ membership, posters expend considerable energy to repair identities by rejecting or reinterpreting GAT results. Simultaneously, however, Stormfront posters use the particular relationships made visible by GATs to re-imagine the collective boundaries and constitution of white nationalism. Bricoleurs with genetic knowledge, white nationalists use a “racial realist” interpretive framework that departs from canons of genetic science but cannot be dismissed simply as ignorant.

One of the issues with studying this phenomenon is that the genetic forum discussions are usually locked down, with many deleted posts, rather quickly because of the overt bigotry being espoused. And they’re usually on private websites to begin with. This makes it hard to accurately follow the discussion from start to finish.

My parents and I have all done the Ancestry DNA thing. My dad had 3% Mali and 1% Benin show up, and we all went “that’s interesting, wonder where that comes in.” Mom’s been working on our family tree but there are some big gaps, especially on Dad’s side.

So when she encountered a fourth cousin or something on Ancestry, who also had Mali listed, she asked about it and got a terse “that’s a mistake” and no further communication.

3% is the equivalent of one great great grandparent. More likely, it’s a couple 3x greats, or several 4x or more greats. For people who understand human migration patterns, this makes sense, but for people who somehow think race is this immutable thing, they write it off as statistical noise.

My sister paid for a DNA test for me for Xmas.

I got 14% Irish and 4% each Finland/ Northwest Russia and Iberian Peninsula, none of which I can explain, but 4% is “low confidence” and the possible range of test results goes as low as zero. The range for Irish goes from 0 - 33%, so even a 14% result might mean nothing, if I understand the results. This is for ethnicities going back millennia, so the results are probably more for entertainment than anything else. (I also show <1% Native American, which simply isn’t possible.)

On the other hand, the “genetic communities” part of the results, which only look back a few centuries to where your recent ancestors lived, was as expected, given what I know of the family tree. Under possible matches, it shows a possible 3-4th cousin with the same last name as my grandmother’s maiden name, and the same ethnic trace elements.

A few years ago my husband did the Geno 2.0 DNA thing from National Geographic and it really changed how he felt about being a member of the human family. It showed the possible migration patterns of his ancestors, how much of his DNA was Neanderthal and Denisovan, and his major haplogroups. None of this percentage of nationality nonsense that Ancestry.com does - which I think it does in order to tacitly support white supremacy.

That sounds more interesting than the Ancestry test. I was certainly disappointed when my results showed no Neanderthal heritage.

None of this percentage of nationality nonsense that Ancestry.com does - which I think it does in order to tacitly support white supremacy.

Well, percentage of ethnicity, which isn’t quite the same thing. Why do you feel this supports white supremacy?

I can’t speak for Katherine, but Asian, African and South American people are really undersampled in 23AndMe and similar services. White people will get detailed output about what exact populations they come from. A lot of other people just get "You’re from an absurdly large potential area of Asia!"
They could get those samples - these companies make huge amounts of money on drug discovery and other medical research (yes, they profit from your DNA) and demonstrate that non-European folks have just as much diversity and complexity as European folks. They just choose not to.

Well, percentage of ethnicity, which isn’t quite the same thing. Why do you feel this supports white supremacy?

The commercials for Ancestry.com conflate nationality with ethnicity with culture with genetics. “My family told me we were Italian - but I’m really German!” Cut to scene of man wearing lederhosen, abandoning his cradle culture for a new costume. This approach to culture is a big part of white supremacy. One could argue that race and ethnicity are analogues, but I differentiate all of the above terms.

how much of his DNA was Neanderthal and Denisovan

Inquiring minds!! We want to know!

White people will get detailed output about what exact populations they come from. A lot of other people just get “You’re from an absurdly large potential area of Asia!”

The sampling probably isn’t even, but they probably do figure that white people are going to be most of their target market. And there probably is some racist bias to all of this. But I’m not sure it’s quite that cut and dried. 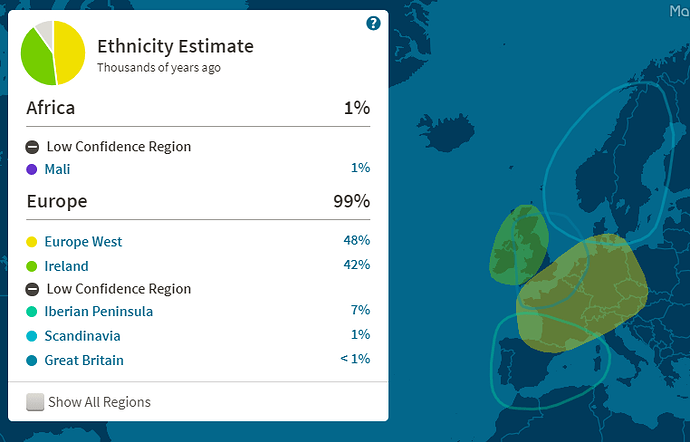 “Europe West” is really not very specific. “Mali” is a bit more so (it’s a big country). My dad’s report had “Benin/Togo” which is about 1/12 the area of “Europe West.”

The “Ireland” that shows up in mine is, we know from records, largely from Scotland.