"Writing what you know"

The reason I bring this up is because I’ve been slowly compiling stories from my decade and a half in East Asia with the intent of pounding out a comic some day… A comic solely because that’s the medium I wasted my youth on getting better at when I could have learned to play the guitar and get allll the girls!

And while I have a lot of my own stories to make a comic out of, I also have a pile of stories from other expats. For some reason people like to tell me things here. I guess I have that sort of face. Now there are deep dark secrets told to me that I plan to take to my grave/ drink until I manage to kill those particular brain cells, but they’re outnumbered by the “Man, only in Japan/Korea/Taiwan!” stories I’ve collected as well. I kind of want to use those.

Thought one: Tracking down these people to get permission would be nigh impossible even if I could remember enough about them to do so. “David Smith of Manchester who was in Korea in 2002” is one thing. “That Australian guy I met in that Mexican place in Kumamoto. Bruce?” is another.

Thought two: They might not remember a damned thing even if I did. Might bring up bad mojo for them. Might not be welcome intrusion into their lives.

So the question I put before you is: Use the stories of others? Yes? No? Why or why not?

Note that I have no plans to pass them off as my own.

Admittedly, he was a part of this story, but (as he points out) the other guy is missing the punchline:

Original article posted by Greg: This actually did happen to a real person, and the real person is me. I had gone to catch a train. This was April 1976, in Cambridge, U.K. I was a bit early for the…

It strikes me that a lot of what you’re doing is similar.

Writers do this all the time. As long as you’re careful to anonymise (to at least not identify or include stories that are so singular that only one person in the world could have done it), and not reveal anything you were sworn to secrecy on I think you’re fairly safe. shrug. Never tell any story in a pub that you don’t want becoming public.

ETA: “sworn to secrecy” which I swear I put in originally, and makes the sentence make sense.

Incidentally, Robert Shaw was drunk as a skunk throughout that scene.

As a writer, there’s no way I can experience everything. If I wrote only what I’ve experienced, why, I’d have nothin’ to write a’tall! Writin’ is about imagination and spinning a coherent yarn. Go ahead and use stories (and fragments) in the tapestries of text and line; ain’t nobody going to object t’ a goot tale ev’vn if they can sort of recall it happening t’ them.

I think write what you know applies more to your emotions. Obviously people write historical fiction all the time and science fiction, so literal truth is not needed. I think sharing other’s experiences is great, as you heard the emotion in their voice.

Absolutely. On the other hand, you also want to avoid the “Deconstructing Harry” scenario where you just write down what happened and change the names. People tend not to like that.

Mind you, there was a major Canadian novel published in the 90s that took a short, dark, Scottish friend of mine and turned him into a tall, blonde Norwegian who did similar art (experimental film-making). Even though the author and my friend knew each other, it wasn’t for certain it was a parody.

(But I still think it was!)

I wonder if I just drew everyone as koalas?

Eclipse is Dalton Trumbo's first novel published in 1935. The novel is about a town and its people written in the social realist style. The town, which Trumbo calls "Shale City," was modeled on Grand Junction, Colorado, where Trumbo lived from 1908 until he left for the University of Colorado in 1924. Trumbo's daughter Nikola writes in a foreword to a new edition of Eclipse that the character John Abbott was a substitute for Trumbo's father and "was based on the real-life Grand Junction citizen W...

People kinda recognized themselves and each other in his book, and got downright surly about it. 72 years later they erected a statue of him (if you see a bronze statue of a guy in a bathtub on a sidewalk in Grand Junction, CO, that’s him), but probably not entirely because of that book.

“That Australian guy I met in that Mexican place in Kumamoto. Bruce?”

Answered Prayers is an unfinished novel by American author Truman Capote, published posthumously in 1986 in England and 1987 in the United States. The title of the book refers to a quote by Saint Teresa of Ávila that Capote chose as an epigraph: "More tears are shed over answered prayers than unanswered ones". 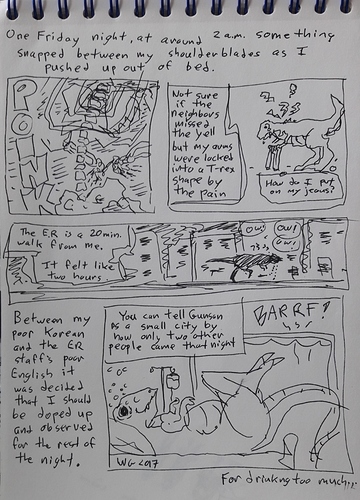 While this story is my own, this is the sort of approach I was thinking of taking. The tentative plan is to publish online with maybe some relevant photographs and a blog to go with the picture. Not sure about a platform tho. I find most of them underwhelming.

If you can make sense of my chicken scratch writing my hat is off to you.

I really like the T-Rex to represent someone who can’t use their arms.

Me too. It’s a good start! I think people doing this are on Tumblr but I don’t know much about it.

I’ll have to ask my cousins about this statue some time. They lived in Grand Junction for many years.

The statue is fairly recent; only ten years old. When it was unveiled, Grand Junction flew the Trumbo family out to see it. There’s a picture somewhere with my wife and her sister next to the tub, with my 6-month-old infant daughter snuggling in her great-grandfather’s bronze arms.

Here’s the statue without my family: 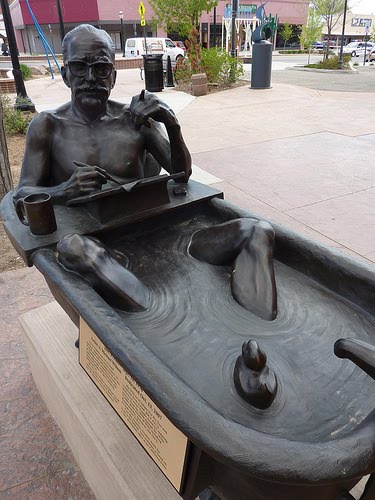 That is one great statue!!

I do believe the rubber ducky was a bit of editorializing by the sculptor.

I think people doing this are on Tumblr but I don’t know much about it.

Tumblr has a lot of things I don’t like about it as a platform. Most of it has to do with not being able to see how your material is performing beyond reblogs and hearts. Those only tell you if Tumblr people are reading. Also their tagging seems to be as meaningless as Instagrams.

I really like the T-Rex to represent someone who can’t use their arms.