Any mutants near there, be safe, okay?

A bunch of angry white guys, gathered at night, with torches, around a symbol. Where have we seen this before?

A hundred years ago, the broflakes had colonized the country. Woodrow Wilson was a reasonable Dominionist in control. Now? A sideshow. It takes a lot of money to prop that shit up when so much money is still going to the third way and Bernie can raise so much by saying “fuck that” to both. And SC is the horrible shitshow they still can’t hold a properly sober torchlight parade.

They’re marginalized, but don’t yet get it beyond “we’re a minority too… a minority no one gives two shits about except to literally shit on us… wait… what?”

Yeah. All this political craziness is a symptom of the fact that they’re losing, not getting stronger.

I just figured they’d at least be pretend to be regular protesters and not go straight for the klan optics.

Why is everyone still calling them “alt-right” or “white nationalist”? They’re Nazis.

Their organizers were slacking, I didn’t see a single pitchfork.

The hate crowd is essentially inspiring and encouraging their enemies to attack and putting everyone else in danger by doing so. But they’re not likely to be victims, it’ll be innocent schoolchildren, people who just happened to be in the wrong place at the wrong time, etc. That’s what’s really vexing. They’re goading people to attack and putting other people in danger just for a brief surge of adrenaline and power trip.

Somehow society has to figure out how to break the cycle instead of continuing it that way.

[Edited to remove a rhetorical line that became all too real as events escalated.

But those aren’t Nazi’s. those are just privileged selfish scared bigots. I won’t pay them the compliment and compare them to an organized and disciplined army of hatred.

Gives me some (little) hope for the future.

Too bad they feel they have to hide their faces. These are the heroes.

There’s no good in being a beat-up hero. Or in having one’s family threatened and/or harmed.

it is indeed a shameful truth that hateful mobs need individuals who speak up, to overpower. It is wise of these young folk to not show their faces, and become individuals - targetable. It is a reflection on the manners and methods of the mob they’re there to protest. Still, too bad they have to hide their faces as they stand up -for- something. But they do.

Imagine you have violent gangs of people like this roving your neighborhood, attacking people in their homes, and how scary that would be. Then, imagine that we hold an election and those same people suddenly become the police.

That must have been how it was for a lot of people living in Germany under Hitler. You’d feel physically threatened, you’d want to run, but you couldn’t—you’d have to just go to your job and act like you were really happy about the new regime and hope that nobody singled you out.

Still, too bad they have to hide their faces as they stand up -for- something.

It’s amazing that in 2017 the people protesting the white supremacist rally are the ones hiding their faces. 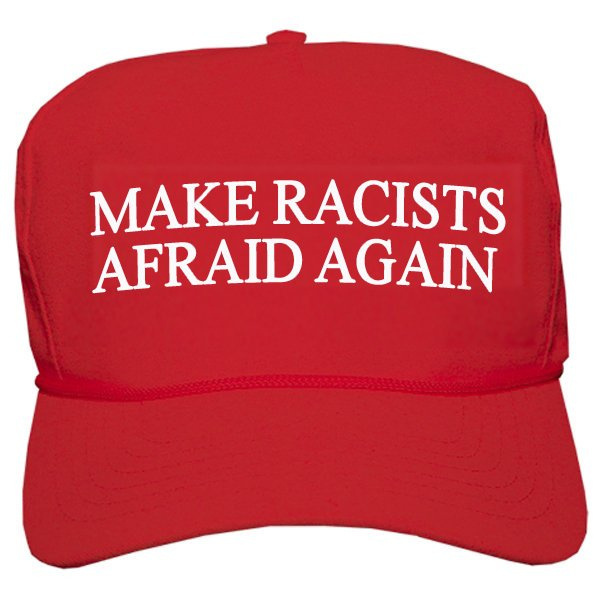 Too bad they feel they have to hide their faces. These are the heroes.

I’ve seen several jackasses making fun of them for hiding their faces. But, context changes things:

When the marchers reached and surrounded the counter-protesters there was a short verbal confrontation. Counter-protesters claimed they were then attacked with swung torches, pepper spray and lighter fluid.
[…]
“Someone from the alt right maced me right in the face – unprovoked,” said one. “After they maced people they started punching people and hitting them with torches.”
(source)

With pepper spray flying around without provocation, I’d keep my head down too.

Martin Luther King would have a thing or two to say about that.

I believe in living to fight another day, hopefully without a closed-head injury.

And Dr. King did what he felt right for him. I’m grateful that, so far, I’ve not had to worry about myself, my family, or my home - but then again, I’m not a black preacher marching against racism in the South.

As an aside, there’s a house in my neighborhood that flies the American flag on its front porch, and the CSA flag on its garage. Would it be improper of me to ask the resident if they were going to fly a flag other than that of the USA, if it could possibly be that of the state of Michigan? I mean, they live in MI, not in Dixie.