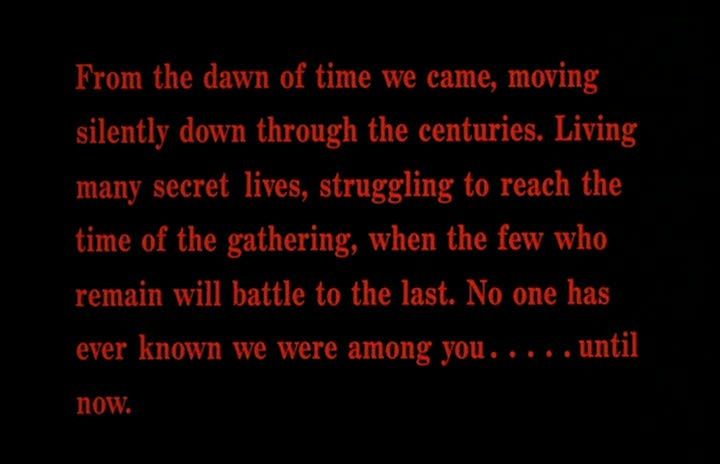 It all came to a head in the late 20th century…or the 56th century, or the 46th century, or in the 13th century. Honestly, it depends on how you choose to mark time. Time makes its mark on humankind - and we attempt to do the same in return. But I’m getting ahead of myself. For those that listen for the whispers of the oldest legends, things started to pick up a bit in the 14th century. Let me tell you what happened then.

Pope Clement V had moved the Curia from Rome to Avignon the year before. Popes get away with all sorts of things, but moving a papacy around is still the sort of thing that raises eyebrows. The curious and the faithful alike traveled to France to see the Pope. Among the throngs of the curious, few had any idea that twenty seven of them were Immortal.

The Armistice of the Immortals forbade combat for one entire year in each century. And in the 14th century, that year was 1310. And it is here our story begins.

And most importantly:
The Travel Options for turn 1. Each turn, you must select a Travel Option to keep the Kurgan off your trail.

Side eye squint sizing everyone up

Turn options will be posted shortly. If the last game is any indication, the bot automation may be a bit rough the first turn or two - and it may be a little more difficult to troubleshoot since this will all be happening via PM. I thank you in advance for your patience. As always, bring any concerns or questions to me directly and I’ll address them as soon as I am able to.

By Neptune’s beard…I haven’t felt this way since…

Never mind. It is clear what I must do. Where is my Parchment of Excel???

Is this yours? shudders I think it’s full of dark magic. 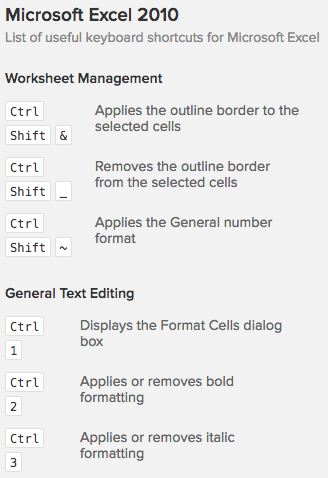 Pouring himself a generous Metaxa, Demos relaxes back into his chair, the heat from the fire warming his old bones.

He lets his mind wander back through the centuries.

This is a good place to begin our tale, children.

He beckons you nearer.

At the time, I was living in Thessaly. Then under the nominal control of Istanbul. No - it was Constantinople, not Istanbul. I lived under the guise of a magnate known as Stephen Gabrielopoulos, and was sebastokrator.

Even old New York, was once New Amsterdam…

@archivist is up and listening for order submissions. Orders for this turn should include three things: a TRAVEL order, a TRAIN order, and a STANCES order and will look something like this in your private messages: 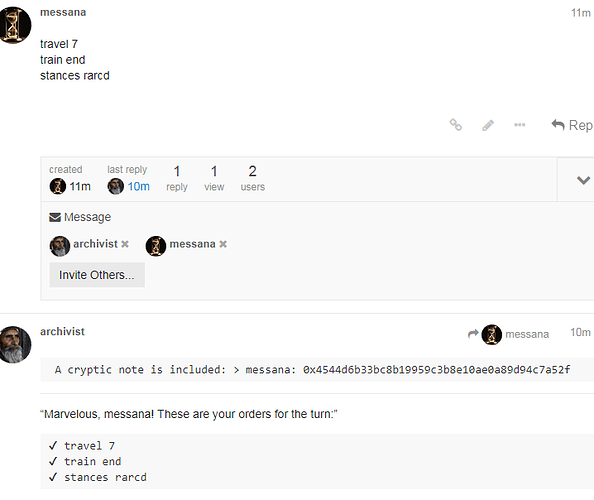 The bot still has a few bugs that I’m working out - in particular, if two players submit orders within the same 60s interval, the bot will lock up. If you don’t get a response from @archivist within 5 minutes, PM me for the moment and I’ll unmuck things by hand. Other than that - good luck, for there can be only one.

It was always challenging for Maple to smuggle herself into the human towns, much less a town full of Catholic pilgrims and courtiers, all watching out the corner of their eye for The Devil to reveal himself, searching perhaps for an excuse to distract those from seeing the demons within their own heart.

It’s not like she didn’t have non-moosekin friends though. She had made friends through the 800+ years of her immortality. A few humans here and there, but rarely city folk. Give her a forest or meadow away from the noisy highways and dangerous brigands.

Even with the Immortals centennial truce, cities were dangerous for a moosekin. Wearing a hood would get her through crowds, but in a conversation there was no hiding her snout, her strange hands and the hair covering her body and face. Being female had its advantages though: no antlers to conceal. 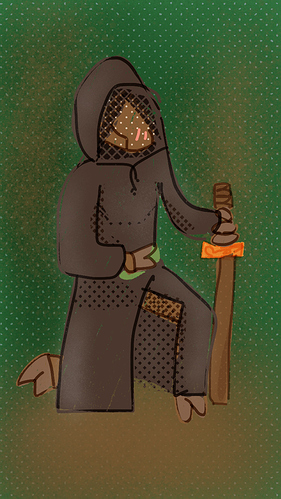 It was easy for Maple to perceive other immortals, as it was them her. There were immortals here in Avignon she had not detected in centuries, along with those she had not detected before. Of course, they could find her, but she could always sneak away, leading her would-be-opponent to an appropriate arena.

Immortals could not innately perceive she was moose-kin, but in combat, when her hood came down and eyes revealed the truth, it did lend an element of surprise, one she had learned to take advantage of. No monologuing for this quiet one.

A nap in a forest was the safest place. Most immortals were humans, well tempered for the farm, city or road. She’d know if they had entered her domain before they could tell the forest apart from the trees.

Meditating before meeting with those who sought her assistance would suffice. Then she would continue travelling through Europe to her destination, wherever that would end up being.