Our blu-ray player died recently, and the family wants a new one for Christmas. However, there’s a bewildering array of options out there, and the descriptions and reviews don’t really describe them well, at least in terms of what we’re looking for, so I’m looking for recommendations.

Would it be better to build an HTPC / Media Center PC? Seems like it might be, and I built my desktop, so I could probably figure it out, but I don’t know the details of requirements for that use case and wouldn’t have much time to figure it out, order the parts, and get it built and configured by next month.

Would it be better to build an HTPC / Media Center PC?

Since you know how to do it anyhow, probably yes.

If you just want a Blu-Ray with a USB, I have a Sony wuthering that. It has a web app library and can connect to Netflix etc, but I just never set it up for that, and after the fitst power up it never asked. It did remember my web connection details after I told it to forget everything, which is highly annoying. I shouldn’t have played with it and told it anything I didn’t want it to know.

After you’Ve used a Yamaha Blu-ray player, all other players are just a lot of plastic boxes. 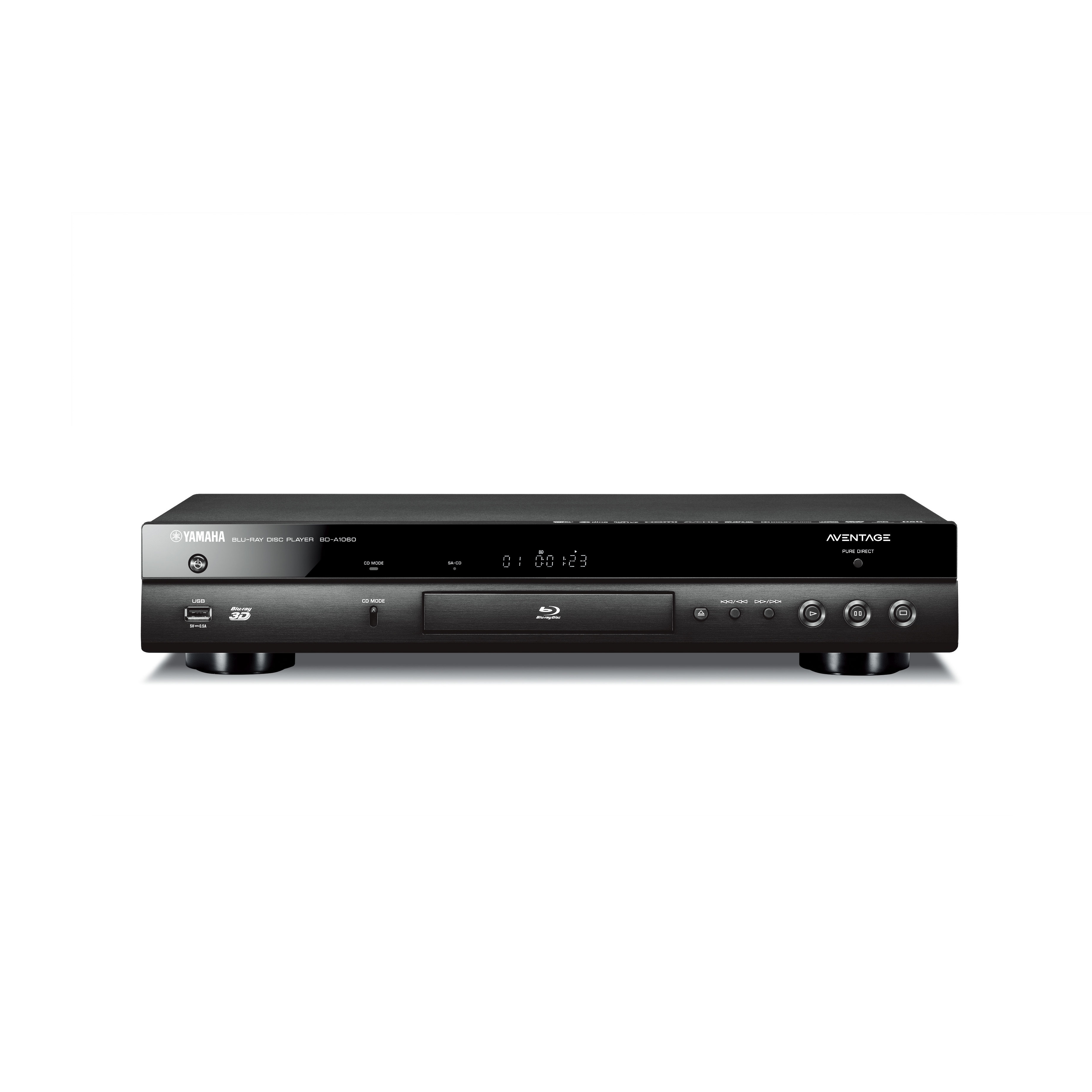 Yamaha, the most trusted brand in home audio electronics, introduces the AVENTAGE BD-A1060 Blu-ray Disc™ player. Born from a legacy of performance-obsessed craftsmanship, this Blu-ray Disc player combines the latest advances in engineering design and...

But we do need to be able to play audio/video files via USB (or streamed from a PC). We’ve had problems in the past that they often don’t recognize common formats/codecs and don’t have ways to add subtitles (.srt files). Ideally, it would work as well on the player as it does when played via VLC on a computer. (Nicer if you could run VLC on it, or cast from a PC playing something on VLC to it.)

Would it be better to build an HTPC / Media Center PC?

if you’re not interested in 4K and you already have a roku, then you should try plex for all your streaming needs. https://www.plex.tv/
Just set up a server on a pc, and install the plex channel from the roku store. It doesn’t need to be dedicated you’ll only have trouble if you’re trying to play a demanding game while someone’s streaming, otherwise you’ll never notice it’s there.

If that works for you then you can get any cheap bluray player for your bluray collection.

I’ll second Plex as an all around excellent thing. I’ve been running it for 5 years now, and it just gets better. Clients for everything; server is reasonably lightweight. I store my media on an NAS box, and the server runs on an ancient Mac Mini.
I’ve even got an IP-enabled set of over the air tuners that will DVR and stream via plex.

Does that make it Duplex?

Do you need any ports besides
HDMI and USB?

As long as we’re asking questions

My amplifierss have committed suidide, and I need a new amp So far as I know, the speakers remain in working order… What’s the cheapest receiver/amplifier that will do these speakers justice?

We purchased an LG Blu-ray player five years ago or so. We didn’t like the way the video looked; it seemed to flicker. I tried to adjust it (and our tv) but had no luck. Then I found out that I couldn’t upgrade the software. LG was no longer supporting the model because it was so old, maybe a whole six months.

We went back to DVDs, and found the lower resolution acceptable; indeed after two minutes I don’t think we noticed. We’d only bought 4 or 5 Blu-ray disks so we said screw it, recycled the player, and replaced the disks with DVDs. Now there’s 4K (and 8K?) but to heck with it. And 3D? Was that a thing?

I have an lg 330 bluray player. It’s quite basic and probably isnt sophisticated enough for your puposes. I don"t use it to play streaming videos, but I think it can.
The major problem with iit, besides the lack of an analog hole, is the eject button looks like the power button, which means that I confuse the two, and it’s annoying.

And I definitely can tell the difference between bluray and dvds.

4k bluray is definitely a thing-- but at 30 dollars a disk, and the need to get a new tv, player, and reciever, its way too expensive.

3d buray is kind of dead…

Do you need any ports besides HDMI and USB?

I don’t think so. We have some old speakers but they’re plugged into the TV.

From the responses (thanks everyone!) it sounds like the main options are either a high quality player or a relatively cheap replaceable player and a NAS box. I’m leaning toward the latter now that I know what it is and can do. I thought it’d be more complicated and hard to make safe and usable for the family.

We went back to DVDs, and found the lower resolution acceptable; indeed after two minutes I don’t think we noticed.

I grew up with black and white TV where you adjusted the tuning knob, vertical hold, and antenna to minimize the static. Then the blurry old color TVs and VHS tapes that degraded every time you played them. The leap from VHS to DVD quality was definitely noticeable. Compared to that, the difference between DVD and Blu-ray seems negligible to me. It’s noticeable to my daughter, but she barely remembers VHS.

Perhaps a harmony remote will simplify the use of both the NAS and bluray. Beware, though. Some appliances, such as the kindle firestick have gotten with the bluetooth program and no longer use IR. The Harmony-- at least the model I have, doesn’t communicate with bluetooth devices. And some of the remotes impose an arbitrary limit on the number of devices.

Those remotes do solve the
“Turn Receiver On. Turn TV on. Twist receiver dial to AUX 3 input. Turn player on. Change TV to use HDMI 1 input.” problem

The high end players tend to have better post processing options, and may support more video services (amazon, netflix, hulu, etc). If they are quite high end, they may even have the sound insulation required to muffle a spinning disc. Post processing is quite useful if you have a library of DVDs with weird “cadences”.. Region freeness is also quite useful-- though many Blurays are coded ABC. It’s not as fragmented as DVDs were.

I used to be quite into Jean-Pierre Jeunet, but many of his blurays came out as Region B only, not Region A. Boo! Hiss!

a lot of the difference lies not in the resolution, but in the remasters used for blurays.

In the Bluray of Dune, you can easily grasp that the Atreides uniforms are green not black.

I have a weakness for costume dramas, and enjoy the fact that I can see “Oh that’s a tweed”, “that’s actually lace”.

And I really like seeing how certain cinematographers play with light-- The lower resolution of a dvd can muddle out the specular highlights. (Sometimes the remasters are poorly done though. Pan’s Labyrinth has that sheen-- but it’s the sheen of light reflecting off wax. Real humans have pores…)

I picked up a new Roku Ultra for the 2d TV. Power and HDMI connected, walked through the setup and it asks about using the Roku remote to control power and volume of the TV.

I click the OK button and expect to go through the list of codes or some other method to tell the remote what TV it was connected to and… Nothing. It just worked.

I had to verify that it had found the right settings, but it just worked.

I have to assume the HDMI connection told the Roku all about the TV it was connected to.

Nice though as now we only need one remote in that room.

I grew up with black and white TV where you adjusted the tuning knob, vertical hold, and antenna to minimize the static.

Me too. I have a memory of watching something with my dad by the set, holding the antenna with one hand to keep the picture stable. I don’t recall what it was that was so important! Soon after he put a huge antenna in the attic, and dropped the wire down inside the walls. The picture was a whole lot better then.

click the OK button and expect to go through the list of codes or some other method to tell the remote what TV it was connected to and… Nothing. It just worked.

That’s thanks to the magic of HDMI-CEC.

Me too. I have a memory of watching something with my dad by the set, holding the antenna with one hand to keep the picture stable. I don’t recall what it was that was so important! Soon after he put a huge antenna in the attic, and dropped the wire down inside the walls.

The story goes that Mom got fed up when Dad was paying too much attention to a very “snowy” hockey game.

No calculus? So you didn’t need to brush your teeth?