Sadly buried by the Doctor Who news, the man who made everything we now believe a zombie is supposed to be, George Romero is dead.

Even more sadly he has yet to spring up and bite someone. 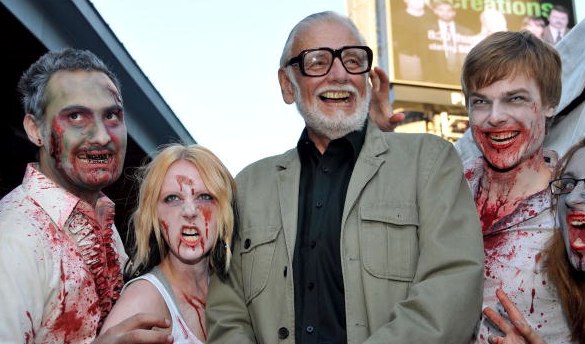 Wow. I finally finished watching Night of the Living Dead for the first time a few weeks ago (the Rifftrax Live version, at least). Good thing it wasn’t more recent, or I’d be worried about causality…

he has yet to spring up and bite someone.

Have to at least let some decomposition set in first, right?

…everything we now believe a zombie is supposed to be…

I don’t know about that bit. The word was appropriated and crowbarred into representing several disparate things. So “we” don’t have any consensus.

But as somebody growing up in the 1970s-80s I was definitely influenced by Romero and his movies of that era. IMO everything he did through “Monkey Shines” was well worth seeing for those interested in the history of horror cinema and independent film. I feel fortunate to have met and spoke with a few people who have worked with Romero, and have been inspired by stories from those productions.

And yes, of course there is a difficult self consciousness in paying respects at the death of somebody best known for tales of reanimating corpses. But what can one do?

I thought this was a particularly interesting piece about his wider influence on culture:

George Romero and the politics of panic